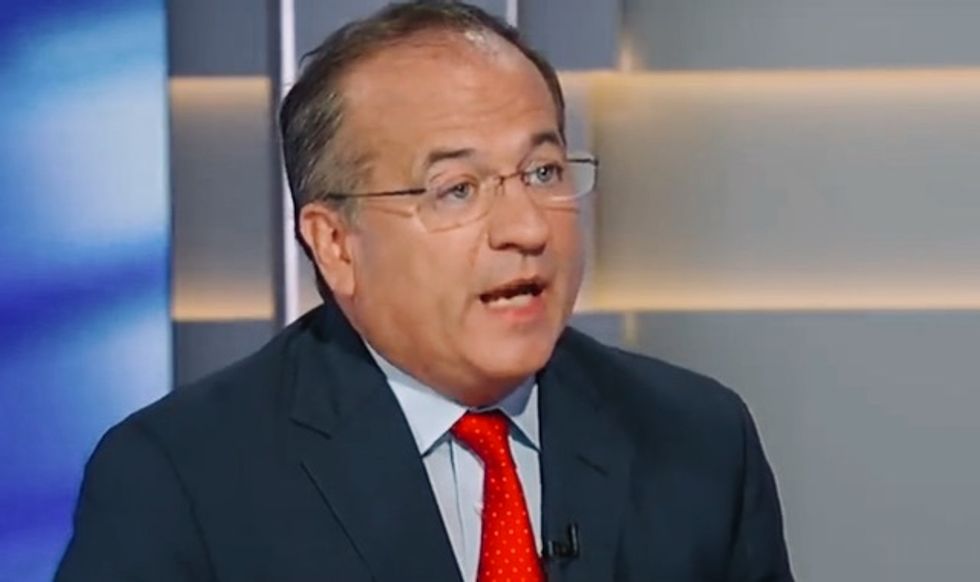 On CNN Thursday, anchor Jim Sciutto pressed Robert Ray, one of President Donald Trump's lawyers in the impeachment trial, about the lies being told by some of his fellows, and he repeatedly refused even to engage with the premise of the questions.

"First, I want to get to the facts of the claims, some of the claims made so far," said Sciutto. "Let's start with number one. White House counsel Pat Cipollone, one of your teammates in the president's defense team, said, 'Not even Mr. Schiff's Republican colleagues were allowed in the SCIF.' This is the secure room where house hearings took place. In fact, 48 GOP members of the three committees that hold those hearings were allowed in the SCIF, and they were given equal time to question witnesses. Will you grant that Pat Cipollone was at least being misleading there?"

"Pat Cipollone is the leader of this defense effort," said Ray. "I think having a conversation now about what happened in the House of Representatives really is not the task or the matter at hand. I think we all need to move on, take a big deep breath, and let's focus on the articles of impeachment and a trial in the Senate. The House's job is over. We're well past that now. We're now in another body, in the United States Senate, where this important and grave matter will be resolved."

"Jim, I'm not interested in navigating in the procedural weeds here. We're well past that now," whined Ray. "We are in the middle of a trial about the grave question about articles of impeachment, whether there's sufficient evidence to sustain them, recognizing those articles don't charge crimes, and the important task ahead, which is whether the Senate believes, as a result of a trial, the removal of the president from office is warranted."

"A central part of the defense, though, is about process and how unfair the process has been. And that's been repeated as the trial began," pointed out Sciutto. "I'll give you another one. Jay Sekulow, also a member of the president's defense team, team member of yours. 'The president was denied the right to cross-examine witnesses, access evidence, and have counsel present at hearings.' Trump was invited by the Judiciary Committee, by Jerry Nadler, to do just that, and Pat Cipollone declined the offer, claiming the process was unfair. Again, the president's legal team is claiming something that is not true there. Why, again, if the case is strong, why not be honest about how that played out in the House?"

"Their overall point, and I will allow House Republicans to speak to that question. I'm not a member of the House of Representatives, and I wasn't there," said Ray. "What I will say is that this effort was an entirely partisan effort to impeach a president. And history has not treated that kindly in connection with presidential impeachments. The point being that under the Constitution, where we are headed is, there is only grounds to remove a president from office if it enjoys bipartisan support."

"As you know better than me, as a lawyer, there is no constitutional requirement on the bipartisan makeup that gives them the power to impeach based on a simple majority," Sciutto said, as Ray continued to dodge his questions.