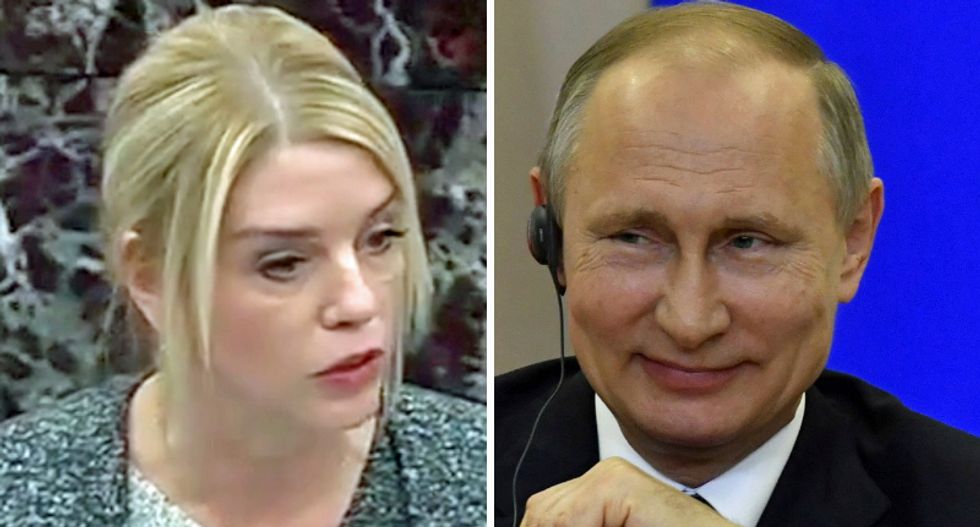 Pam Bondi and Eric Herschmann pushed the conspiracy theory, which originated from Russian intelligence, on Monday.

The pair were harshly criticized for the distraction.

The entire Trump defense team is pitching a story made up by Russian intelligence services. This is truly remarkable.
— Charles P. Pierce (@Charles P. Pierce) 1580163252.0

We’re all so desensitived by now but this is truly wild. Pam Bondi is going full-on reddit conspiracy theory on the Bidens.
— Paul McLeod (@Paul McLeod) 1580162798.0

If you are wondering why I'm no longer tweeting about the legal arguments, it's because the @realDonaldTrump team h… https://t.co/NbbhMqhXBt
— Elie Mystal (@Elie Mystal) 1580163468.0

An impeachment defense based on whataboutism, including a fiction created by Russian intelligence, is, unfortunatel… https://t.co/Nb26JK5U8h
— Nicholas Grossman (@Nicholas Grossman) 1580164461.0

This appears to be the first time the White House team has articulated the Biden conspiracy theory in opening args.… https://t.co/gevXb0lIKa
— Adam Klasfeld (@Adam Klasfeld) 1580162797.0

If there was a Judge in the room, this would have been stopped a long time ago and two lawyers would be in jail for… https://t.co/YXjxM8SzUM
— Joe Lockhart (@Joe Lockhart) 1580164228.0

I see we are on to the constitutionally prescribed portion of the trial in which the defense advances a series of c… https://t.co/EgqcVzNiBS
— Josh Marshall (@Josh Marshall) 1580162451.0

This grave moment in our Nation’s history should be decided by dutiful examination of witness testimony and relevan… https://t.co/EKqC9aaWHH
— Senator Bob Casey (@Senator Bob Casey) 1580155726.0