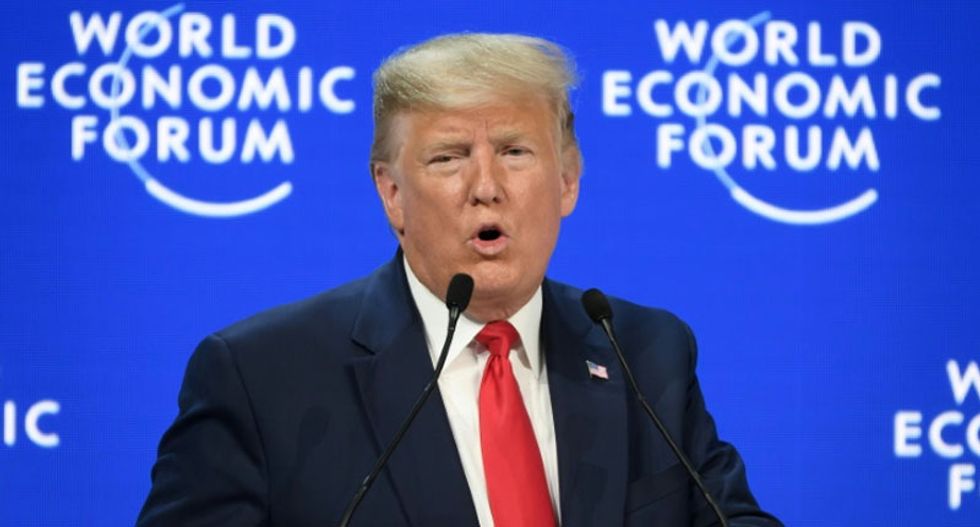 President Donald Trump tore into environmental "prophets of doom" at the Davos forum Tuesday, rejecting fiery warnings from teenage campaigner Greta Thunberg, and lauding the "unprecedented" US economy just hours ahead of his impeachment trial back home.

Thunberg was in the audience in the Swiss Alps to hear the typically bullish speech by Trump, delivered shortly before the US Senate was to open the crucial next stage in his trial for abuse of power and obstruction.

The 50th meeting of the World Economic Forum aimed for a strong focus on climate change but Trump made clear he had no time for Thunberg's warning that "our house is still on fire."

"We must reject the perennial prophets of doom and their predictions of the apocalypse," said Trump, complaining that "they want to see us do badly".

He claimed that "alarmists" had been wrong over the decades when predicting population crisis, mass starvation or the end of oil.

Trump branded those warning of out-of-control global warming and other environmental disasters "the heirs of yesterday's foolish fortune tellers".

The scathing assessment came just after Switzerland's president, Simonetta Sommaruga, made an emotional appeal for saving the health of an ailing planet on the same stage.

By contrast, Trump did not even mention global warming, a phenomenon that nearly all climate scientists say is dangerously accelerating, with possibly devastating results for humanity.

Trump was just as unapologetic over his impeachment, which is now kicking into high gear.

He said in Davos he was working for American investment, meeting with "the most important people in the world and we're bringing back tremendous business".

"The other's just a hoax," he said of the "disgraceful" impeachment trial.

The White House spokeswoman, Stephanie Grisham, said Trump "will be briefed by staff periodically" on the drama unfolding in Washington.

Large parts of Trump's address sounded like a campaign speech aimed at a domestic audience as much as the Davos gathering of global political and business elites.

"Two years ago I told you we had launched the great American comeback," Trump said, referring to his last appearance at the yearly Davos bash. "Today I'm glad to declare the United States is in the midst of a great economic boom the likes of which the world has never seen before."

Over and over, Trump brought up statistics he claimed proved his "unprecedented" success, based on slashing environmental protections and renegotiating trade relationships with China and the United States' two huge neighbours Canada and Mexico.

"The American dream is back, bigger better, stronger than ever before," he said.

Robin Niblett, director of the Chatham House think tank, called Trump's performance "an almost plain vanilla presidential campaign speech, laying out an unassailable set of statistics that tell the Democrats 'good luck taking me on on this, because you won't stand a chance."

Earlier, Thunberg underlined the message that has inspired millions around the world, saying "basically nothing has been done" to fight climate change.

"It will require much more than this. This is just the very beginning," the 17-year-old said.

Speaking calmly and with a wry smile, Thunberg acknowledged that her campaign, which began with school strikes, had attracted huge attention without yet achieving concrete change.

"There is a difference between being heard to actually leading to something," she said.

And despite the focus given by the Davos forum, Greenpeace said in a new report that some of the world's biggest banks, insurers and pension funds have collectively invested $1.4 trillion in fossil fuel companies since the Paris climate deal in 2016.

Trump touted the United States as the "number one producer of oil and natural gas" and said he would not let "radical socialists" attack the lucrative industry.

Sustainability is the buzzword at the Davos forum, which began in 1971, with heel crampons handed out to participants to encourage them to walk on the icy streets rather than use cars, and the signage paint made out of seaweed.

"People are paying a lot more attention" to climate, Eurasia Group president Ian Bremmer told AFP at Davos, adding there was "genuine action by some big players", after investment titan BlackRock said it was partially divesting out of coal.

"But let's be clear -- a big part of this is because we failed for a very long time and governments continue to fail," he added.

Business leaders are likely also to be concerned by the state of the global economy whose prospects, according to the International Monetary Fund, have improved but remain brittle.