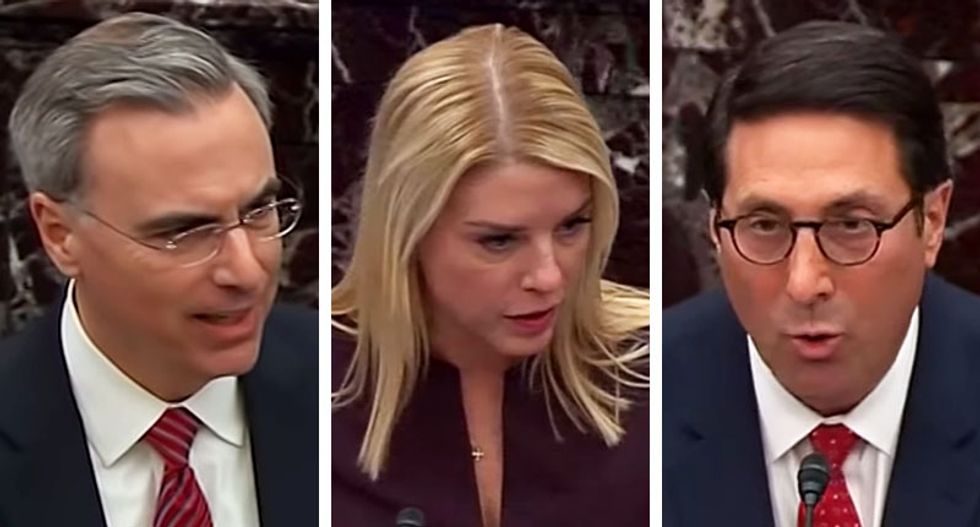 A new book by Pulitzer-winning reporters Philip Rucker and Carol Leonnig, "A Very Stable Genius," hit the bestseller lists this week. It reports a scene in which President Trump participated in a documentary about the U.S. Constitution in which various well-known people were asked to read their favorite part. Trump chose the opening of Article II, which delineates the power of the president.

According to Rucker and Leonnig's account, Trump had a great deal of trouble reading it and got testy, blaming everyone but himself for the problem. At one point he said, "It's very hard to do because of the language here, it's very hard to get through that whole thing without a stumble. It's like a different language, right?"

This is the opening of Article II:

The executive power shall be vested in a President of the United States of America. He shall hold his office during the term of four years, and, together with the Vice President, chosen for the same term, be elected, as follows:

I'm not surprised Trump thought the Constitution was in a foreign language. But I didn't expect that his lawyers would think so too. You can't come to any different conclusion after the opening of Tuesday's impeachment trial.

Perhaps Majority Leader Mitch McConnell forgot to tell Trump's defense team that Senate rules allowed Democrats to offer amendments to the proposed trial rules, but that's doubtful. They may not have realized that House Intelligence chair Adam Schiff and his team would show up fully prepared to begin laying out their case within those proposed amendments.

The Trump team mainly got up and sputtered about fairness and process and otherwise whined and complained about the House Democrats. They fulfilled their principal duty, which was to provide Fox News with digestible clips of them passing on familiar lies, such as the tiresome falsehood that House Republicans had been shut out of depositions and that the president wasn't allowed to participate in the House hearings.

White House counsel Pat Cipollone is either a very dishonest lawyer or he has some kind of memory problem:

Until yesterday, Cipollone was something of a mystery. Most people hadn't heard him speak but having been a partner in a big law firm and a long-time Washington figure in Catholic activist circles, I think it was assumed he was a serious person. Tuesday's long day put an end to that assumption. He was testy and snide though most of it, and failed to offer any cogent legal arguments.

Many of us had thought his incomprehensible screeds like the one above must have been personally dictated by the president. But after watching Cipollone for 11 hours, it's clear that he is personally very much on Trump's wavelength in a way that goes beyond the zealous representation of a good lawyer. Let's just say that he's got a second career on talk radio or Fox News ahead of him if he wants it.

Jay Sekulow, one of Trump's personal lawyers, was exactly as one might have expected. He was bombastic and flamboyant, just as he's often been in his career as a right-wing media star and legal representative for the Christian right. He managed to have the single most embarrassing moment of the entire day when he took to the podium to rave about House manager Val Demings' supposed claims of "lawyer lawsuits." Sekulow declared:

The problem is that Demings never said anything about "lawyer lawsuits" and nobody knew what in the world Sekulow was ranting about. Demings had said that "FOIA lawsuits filed by third parties cannot serve as a credible alternative to congressional oversight."

In true Trumpian fashion, the White House actually doubled down on their error:

No, the transcript does not say that. The video of Demings' comments is clear. In any case, no one has been able to explain Sekulow's unhinged reaction to "lawyer lawsuits" or "FOIA lawsuits." It was surreal.

The Trump team showed up with the intention of doing nothing but complain about Democratic amendments. Unfortunately for them, the House managers outmaneuvered them.

Senate Majority Leader Mitch McConnell had dropped a big bomb late Monday. First he said he would follow the Clinton impeachment procedures of opening statements, then questions from senators, and then an up-or-down vote on whether to consider calling witnesses or new evidence. He also planned to give each side 24 hours to make their case — but unlike the Clinton trial in which they could take as many days as necessary, he wanted them to complete their cases in two 12-hour days each. Instead of allowing the evidence from the House impeachment hearings to be automatically entered into evidence he wanted that to be considered after the trial was completed as well.

It was a daft proposal and on Tuesday McConnell amended these rules slightly at the last minute, allowing three days for each side at trial and entering the existing evidence into the record automatically. (The news went forth that "moderate" Sen. Susan Collins and some other Republicans demanded the change but you can't help but suspect that McConnell and Collins cooked this together in advance to make her look good.)

McConnell is still insisting on leaving the question of witnesses until the end of the trial which makes no sense in a case where the president has stonewalled the whole process. That's what led Minority Leader Chuck Schumer to offer 11 different amendments asking for witnesses and documents to McConnell's resolution, a process that ended up taking 11 hours, with arguments on both sides.

Starting the day not knowing if they were going to have time to make their case or have their evidence put into the record, the Democratic managers decided not to make long legal or constitutional arguments. They instead used the time allotted by the Senate rules for amendments to put on their case, show their evidence and argue that the witnesses and documents the White House refuses to provide prove that it's engaged in a cover-up.

They were extremely well prepared, with each manager handling different aspects of the case with exhibits and well thought-out arguments for each one. The Trump team's members were like kids claiming that the dog ate their homework. They obviously thought the day would to be a political sparring match and instead found themselves deep in the evidence without much to rebut it, except Trump's Twitter feed and Sean Hannity's talking points.

Nonetheless, the Senate voted down every amendment on party-line votes, as expected. The fix was in from the start. But if this trial is a competition for the hearts and minds of the American people, the Trump team lost the first round. And you only get one chance to make a first impression.