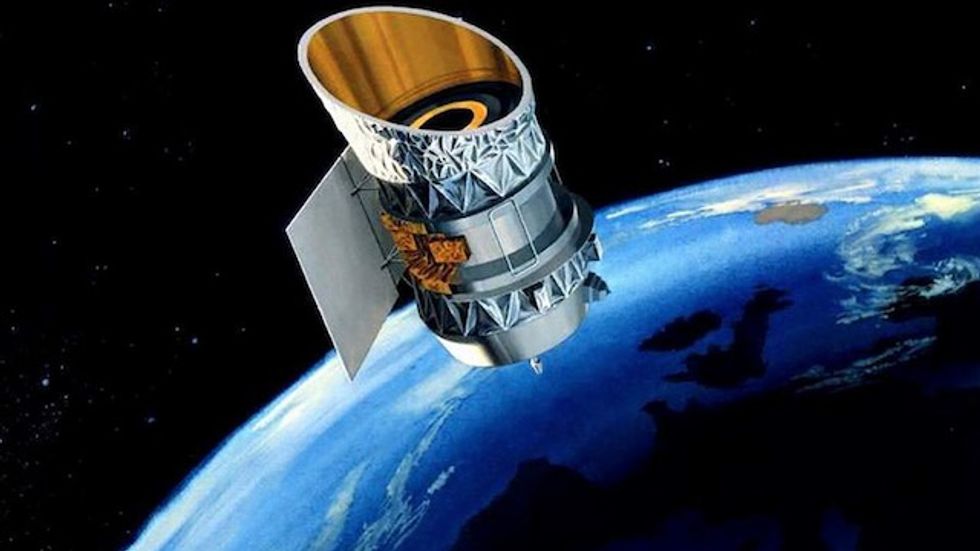 Two decommissioned satellites sped towards each other Wednesday at a combined speed of almost 33,000 miles (53,000 kilometers) an hour, raising the risk of a collision that would send thousands of pieces of debris hurtling through space.

The satellites -- a pioneering international space telescope and an experimental US craft traveling in opposing orbits -- are expected to pass within 100 meters (yards) of each other at 2339 GMT, according to the space debris tracker LeoLabs.

Although the likeliest scenario is a near miss, experts are closely watching the rendezvous, which is set to occur about 900 kilometers (560 miles) above the US city of Pittsburgh.

Crashes involving large satellites at very high speeds (known as hypervelocity) are rare and dangerous, generating clouds of debris that endanger spacecraft around the planet.

The first time it happened was in 2009 when the active communication satellite Iridium 33 struck the decommissioned Russian satellite Cosmos 2251, resulting in a debris field of about 1000 large objects in low Earth orbit.

The Infrared Astronomical Satellites (IRAS) space telescope was launched in 1983 as a joint project of NASA, Britain and the Netherlands, and its mission lasted only 10 months.

It weighs one tonne (ton), according to data provided by the European Space Agency and is about the size of a truck with measurements of around four meters by three meters by two meters (12 feet by 11 feet by seven feet).

The experimental US satellite, GGSE-4, was launched by the US Air Force in 1967 and weighs just 85 kilograms (190 pounds) but has an unusual shape -- just 60 centimeters (two feet) wide but 18 meters (60 feet) long, and it flies vertically.

LeoLabs, which uses radar to calculate collision risk, placed the probability of their making impact at between one and five percent, based on the uncertain orientation of the GGSE-4. This is considered a high risk among the space community.

If they do hit, they could create around a thousand pieces of debris larger than 10 centimeters, and more than 12,000 fragments bigger than one centimeter, astrodynamicist Dan Oltrogge told AFP.

"We will know because especially for low Earth orbit, there is much radar coverage, and we would see fragmentation happening, we would see objects separating off," he said -- though it won't be visible to the naked eye.

The 900 kilometer altitude band is particularly crowded with satellites.

There are around 20,000 catalogued pieces of debris bigger than a softball orbiting the planet, traveling at speeds up to 17,500 miles (28,000 kilometers) per hour, and satellite operators have to frequently adjust their trajectory accordingly, which isn't possible once a satellite dies.

"There's also the introduction of a lot of what we call lethal non trackable debris. It's debris that's big enough to kill your satellite, but not big enough to currently be tracked."