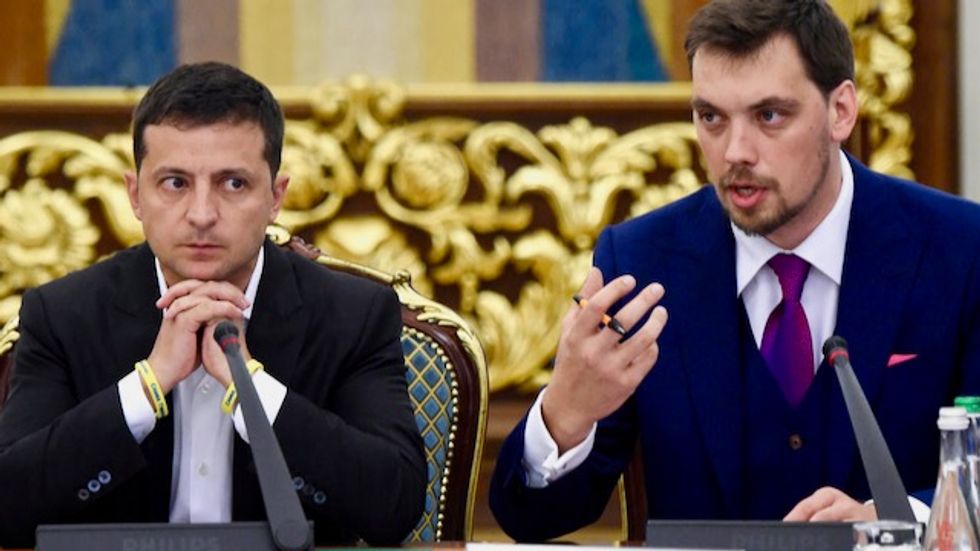 Ukraine's prime minister offered his resignation on Friday after audio was leaked of him reportedly criticizing President Volodomyr Zelensky's understanding of the economy.

"To remove any doubts about our respect for and trust in the president, I have written a resignation letter and handed it over to the president," Oleksiy Goncharuk wrote on his official Facebook page.

He said the audio "artificially created an impression that my team and I do not respect the president".

"This is not true," he said. "I came to this post to carry out the president's program."

Zelensky's office said it had received the letter of resignation and would consider it.

The alleged recordings, which emerged this week, came from an informal December meeting between ministers and senior officials from the National Bank.

According to local media reports, the participants discussed how to explain recent economic developments to Zelensky, a 41-year-old comedian and political neophyte who won a surprise election victory last year.

Goncharuk, 35, is reportedly heard saying that explanations need to be simple because Zelensky has a "primitive understanding" of the economy.

He also called himself an economic "ignoramus".

After the recordings emerged on Wednesday, media reported that Goncharuk resigned but his office denied this.

Goncharuk became Ukraine's youngest-ever prime minister after Zelensky nominated him for the post in August amid a stalling economy and war with separatists in the east.

Goncharuk's candidacy was quickly approved by MPs as Zelensky's "Servant of the People" party holds a majority in parliament.

His appointment was in line with Zelensky's vow to bring in fresh faces and shake up Ukraine's stagnant politics.

He replaced Volodymyr Groysman, 41, who offered his resignation after Zelensky was inaugurated in May.

A young lawyer with virtually no experience in government, Goncharuk was little known to the public.

Goncharuk, who studied law and public administration before co-founding a law firm at the age of 24, is considered a supporter of liberal economic reforms.

Before becoming deputy head of the president's office when Zelensky came to power, he managed for several years an EU-funded NGO that works to improve the business environment in Ukraine.

Timothy Ash, a senior emerging markets strategist at Bluebay Asset Management, said this week that while Zelensky was not a trained economist, he has hired "a decent economic team.".

Ukraine's economy has been hit hard by the conflict in the east and is reliant on foreign aid.