US Democrats lock horns over war, gender in last debate before Iowa 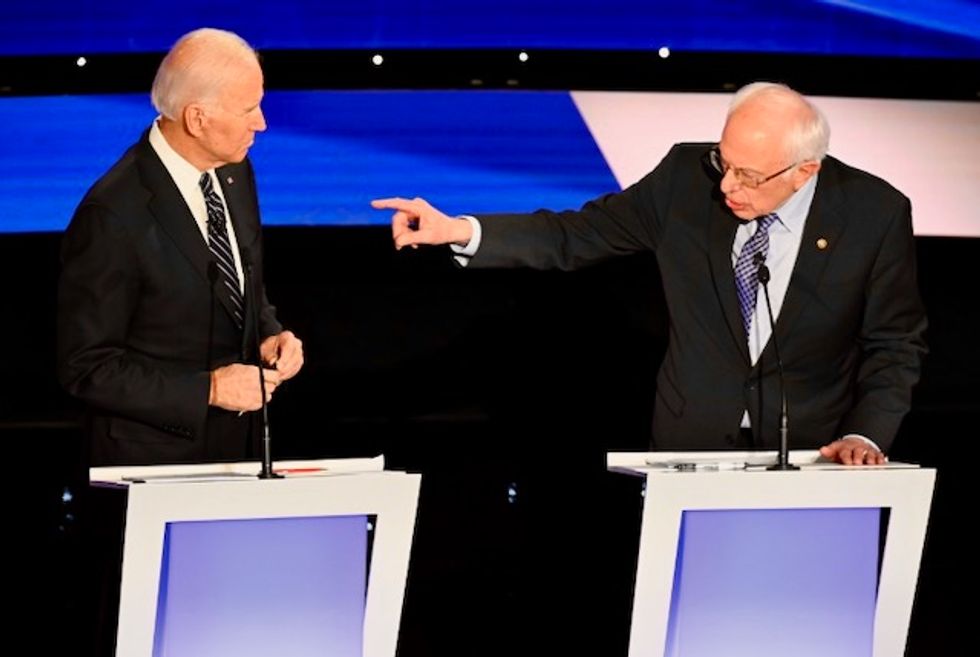 With no candidate yet to carve out a clear lead less than three weeks to go before the first votes in the nominations battle, the stakes were high for the six presidential hopefuls on stage in Iowa.

The largely civilized showdown defied earlier expectations of fireworks, with tensions largely held in check during the two-hour debate.

But a rift between Sanders and fellow Senator Elizabeth Warren appeared to widen afterwards when Warren declined to shake hands with her long-time friend and fellow progressive.

The candidates tangled over everything from troop deployments and foreign policy to health care, international trade, climate change and a woman's chance of winning the White House.

Sanders, 78, assailed former vice president Biden, 77, over his vote in support of the 2003 Iraq war as the modern-day tensions in the Middle East dominated the opening exchanges.

With Washington's conflict with Iran as the backdrop, non-interventionist Sanders drew a sharp contrast, saying that while he opposed an Iraq war that was "based on lies," former vice president Biden trumpeted the effort.

"I thought they were lying," Sanders said of the Bush administration's justifications for war in 2002. "I didn't believe them for a moment. Joe saw it differently."

Biden said he had long acknowledged the war was "a mistake" but refrained from sparring with Sanders over Iraq.

Instead, Biden appealed for unity in preventing Trump from winning a second term.

"The American character is on the ballot," Biden said. "Not what Donald Trump is spewing out -- the hate, the xenophobia, the racism. That's not what we are as a nation."

Each candidate is desperate for a breakout moment that could give them the vital momentum heading into the Iowa caucases on February 3 which begins the presidential primary season.

For months, Sanders and Warren have battled peacefully for the right to wave the campaign's progressive flag. But their non-aggression pact unravelled in recent days, with Warren endorsing a report that Sanders privately told her he believed a woman could not defeat Trump.

"I didn't say it," Sanders insisted at the debate, stressing it was absurd for anyone to think a woman could not win the White House.

Warren said he did, before insisting that she was "not here to try to fight with Bernie."

She then proceeded to highlight the electability of women, noting that the men on stage collectively lost 10 elections, prompting laughter from the audience.

But when the debate concluded, signs of lingering animosity remained: viral video shows Warren refusing to shake Sanders's outstretched hand and instead speaking briefly to the senator.

AFP / Robyn Beck Former South Bend, Indiana mayor Pete Buttigieg is seeking to remain in the top tier of US Democratic presidential candidates, while Senator Amy Klobucher is struggling to climb into it

While lacking the effervescence of earlier debates, the candidates dutifully debated trade (Sanders said he opposes the new US Mexico Canada trade pact), climate change (Steyer if elected would declare a climate "state of emergency") and taxing the rich (Warren pushed her wealth tax).

Sanders, who suffered a heart attack in November but has enjoyed a mini surge in the polls in recent weeks, made Biden his number one target.

"I just don't think that Biden's record is going to bring forth the energy that we need to defeat Trump," Sanders tweeted as he released a damning three-minute anti-Biden video just before the debate.

The president meanwhile sought to thrust himself into the spotlight, accusing Sanders of being "nasty" and mocking Biden for occasional memory issues as he addressed supporters in Wisconsin.

"They haven't been doing great on the debates, I have to tell you," Trump said.

The debate risks being overshadowed by a historic political drama: Trump's looming impeachment trial in the Senate next week which is likely to force four presidential candidates to stay in Washington serving as jurors in the proceedings instead of winning over undecided Iowa voters.

There was no disagreements among Democrats that a Senate impeachment trial ought to proceed, with Warren saying "it is my responsibility" to sit as a juror.

Polling is tight in Iowa, with Biden at 20.7 percent support and Sanders, Buttigieg and Warren all less than five percentage points back, according to a RealClearPolitics average of polls.

Klobuchar, credited with a crisp performance in the previous debate, was well behind, at seven percent. Steyer is at 2.7 percent.

But the race remains fluid, with a recent Des Moines Register poll saying six in 10 voters could still be persuaded.