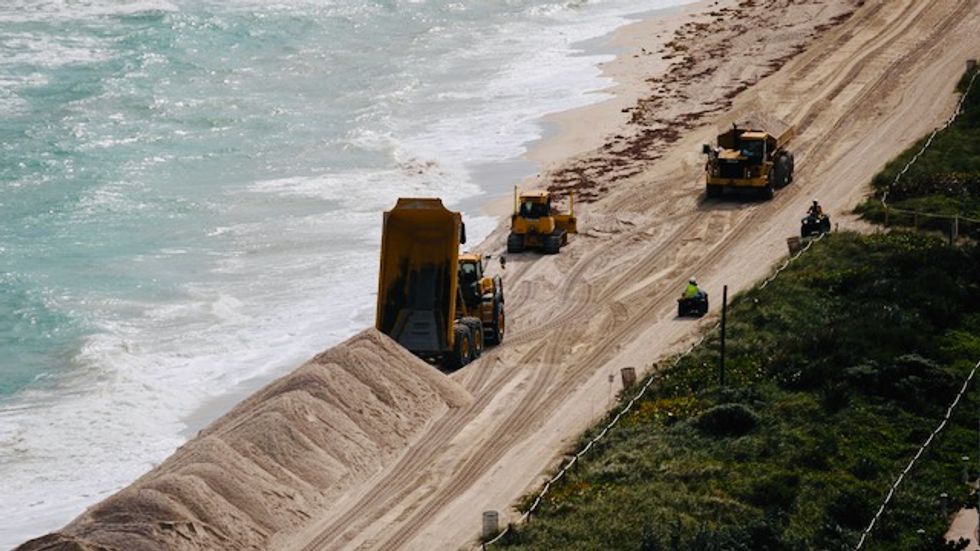 Dozens of trucks have started dumping hundreds of thousands of tons of sand on Miami Beach as part of US government measures to protect Florida's tourist destinations against the effects of climate change.

"We have erosion hotspots," said Stephen Leatherman, an expert on beaches and the environment at Florida International University.

"When the beach is critically narrow, there's not enough room for recreation for all the people that come here, and more important, perhaps, all these buildings need to be protected," he said Friday.

Leatherman -- known locally as "Dr Beach" -- said that rising sea levels, triggered by climate change, are causing the accelerated erosion of the famous beach, as well as coastal storms and in particular hurricanes.

The Army Corps of Engineers this month began the $16 million operation to dump 233,000 cubic meters (8.2 million cubic feet) of sand on eroded areas of Miami Beach by June, a project that was originally designed to address damage wrought by Hurricane Irma in 2017.

Every day, trucks will tip between 100 and 250 loads, each containing 22 tons of sand, onto the beach, the Army said in a statement.

"Some people say it's like throwing millions of dollars out in the ocean every year and maybe they're right, but we have to do it; we have to have the beach here," said Leatherman.

"South Florida is considered ground zero for climate change," he said. "I mean, not only do we have beach erosion, we got flooding going on during King tides, which happen all too often now, where some roads get flooded."

A King tide is an especially high spring tide.

The project is part of an overall $158 million federally funded plan to protect Miami from hurricanes and control beach erosion.