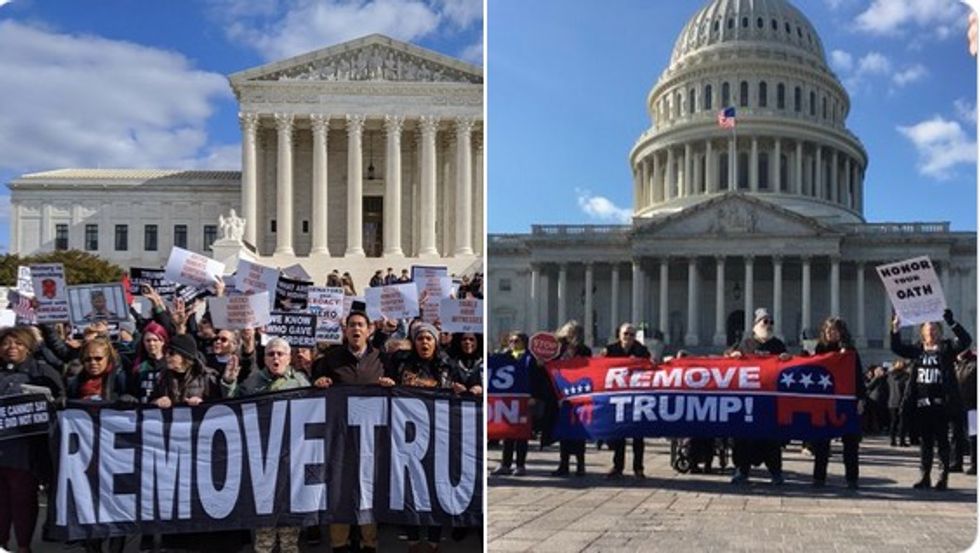 "The American people need to see all the documentary evidence and hear from all potential witnesses. We will not stand for the GOP's obstruction of justice."

The "Swarm the Capitol" event was organized by Center for Popular Democracy Action, Public Citizen, the Poor People's Campaign, and other grassroots organizations representing hundreds of thousands of Americans nationwide.

"We are calling for a moral impeachment," Rev. William Barber, co-chair of the Poor People's Campaign, said at a press conference ahead of Wednesday's action. "That's why we're marching with our allies today."

With the #WeWantWitnesses later trending on social media, the day of action began with a silent protest inside the Hart Senate Office Building atrium at noon, according to Public Citizen. Demonstrators then marched to the steps of the U.S. Capitol building, where arrests are expected.

Hundreds of people gathered outside the Capitol Building:

Hundreds rally at the Supreme Court and the Capitol to demand a fair trial with witnesses & documents. Join your vo… https://t.co/jjrySzLNTS
— Sierra Club (@Sierra Club) 1580326718.0

As Common Dreams reported earlier Wednesday, McConnell told fellow Republican senators behind closed doors late Tuesday that he does not yet have the votes to block witnesses from testifying in Trump's impeachment trial. A vote on whether to allow witnesses is expected to take place Friday.

A Politico/Morning Consult poll released Wednesday found that 57% of the U.S. public—including 86% of Democrats and 57% of Independents—believe Trump should not be permitted to invoke executive privilege to block witnesses from testifying in the Senate trial. Just 25% of Republicans said the president should not be allowed to invoke executive privilege.

On Tuesday, a Quinnipiac University poll found that 75% of registered voters believe witnesses should be allowed to testify at the impeachment trial, and 53% of voters believe Trump is lying about his actions toward Ukraine.

"The American people need to see all the documentary evidence and hear from all potential witnesses," the progressive coalition wrote on Facebook ahead of Wednesday's demonstrations. "We will not stand for the GOP's obstruction of justice."