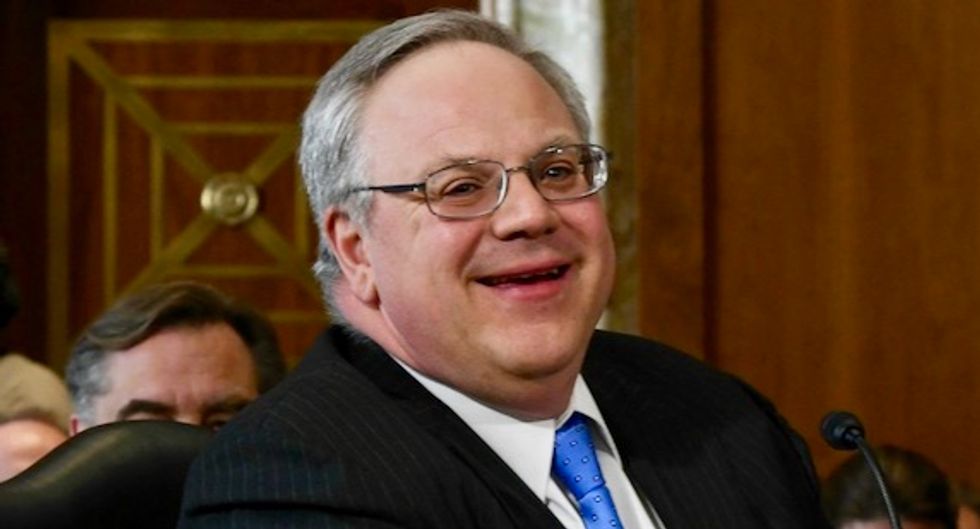 "The corruption is absolutely shameless."

More than a dozen former lobbying clients of Interior Secretary David Bernhardt have spent nearly $30 million convincing the Trump administration to do the bidding of the fossil fuel industry, according to a new report by Public Citizen.

The government watchdog released its study, entitled "Bernhardt Buddies," on Thursday after examining lobbying records and Bernhardt's recusals due to conflicts of interest. The former oil and gas lobbyist infamously had such a long list of companies he officially had to avoid working with when he was serving as a deputy at the Interior Department, that he carried the list around on index cards.

Since Bernhardt replaced Ryan Zinke—who resigned in 2018 amid his own ethics scandals—17 of Bernhardt's former clients have lobbied the federal government. Fifteen of those have lobbied the Interior Department, including eight which spent more than $1 million each.

"The corruption is absolutely shameless," tweeted Public Citizen Thursday as it released the analysis.

"Millions in spending on lobbying have proven devastating for public lands but a gusher for oil and gas interests," said Robert Weissman, the group's president. "Industry groups' belief in their ability to exert influence at the highest levels coincides with evidence that Bernhardt has consistently favored industry over conservation interests and public health. There appears to be no end, and no shame, in sight."

Organizations including the Independent Petroleum Association of America and fossil fuel companies such as Sempra Energy and Noble Energy have lobbied the administration on issues including federal protections for the sage grouse—which the government slashed last year—and water preservation.

Since Bernhardt took the helm of Interior, the department has pushed to allow oil drilling in the Arctic National Wildlife Refuge, made it more difficult to designate a species as endangered, moved the Bureau of Land Management’s headquarters to Colorado, where fossil fuel interests have easy access to the agency, and opened one million acres in California to fracking.

According to Public Citizen's report, prior to Bernhardt's confirmation, one oil and gas lobbyist told a room full of his colleagues that "We know [Bernhardt] very well, and we have direct access to him, have conversations with him about issues ranging from federal land access to endangered species, to a lot of issues."

Mother Jones reporter Rebecca Leber tweeted that the long-term effects of many of the issues Bernhardt's associates have lobbied for will be difficult to reverse by a future administration.

I think a lot about what Trump policy a new administration can reverse—regulations can always change but it will be… https://t.co/tO8ponAcwi
— Rebecca Leber (@Rebecca Leber) 1579189882.0

"Regulations can always change but it will be nearly impossible to reverse all this leasing and the permanent damage to endangered species," Leber wrote.