'You know your client is guilty!' Adam Schiff burns down Trump lawyers' 'descent into constitutional madness' 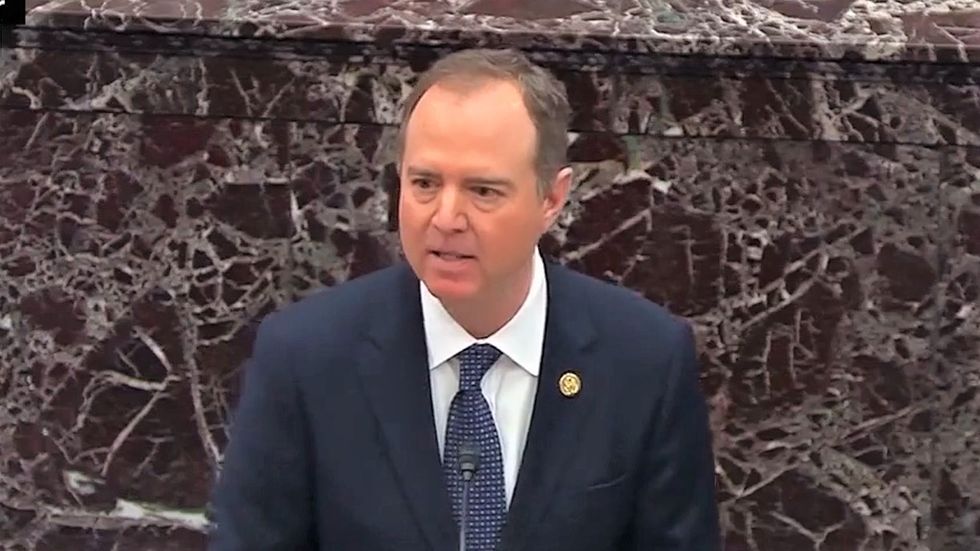 Rep. Adam Schiff (D-CA) on Thursday criticized President Donald Trump's legal team for arguing that the president can shake down foreign countries for dirt on his political opponents because his reelection is in the "national interest."

When asked about Trump attorney Alan Dershowitz's expansive views of presidential powers that now include extorting foreign governments in the name of winning elections, Schiff expressed astonishment that such views were even being debated.

"It's astonishing that on the floor of this body someone would make this argument," he said. "Now, it didn't begin that way... but what we have seen over the last couple days is a descent into constitutional madness, because that way madness lies."

Schiff went on to say that he could only imagine Dershowitz making such an argument because he can no longer dispute the damning facts that have been gathered about the president's actions.

"The only reason that you'd make that argument is you know your client is guilty, dead to rights!" he said.

"The only reason you make that argument is because you know your client is guilty." @RepAdamSchiff blasts Dershow… https://t.co/DtIIxemixt
— CAP Action (@CAP Action) 1580409013.0

Could this one weird trick save American democracy?

The past decade has seen voter suppression and partisan gerrymandering grow dramatically worse, while the Supreme Court has undercut efforts to fight back through litigation — both by striking down a key provision of the Voting Rights Act and by declaring that partisan gerrymandering is not a matter for the courts. But the courts aren't the only avenue for protecting America against democratic erosion. Congress has a key role as well — in fact, it has an urgent duty to act, according to a recent article about the U.S. Constitution's "Guarantee Clause" by Carolyn Shapiro, a professor at the Chicago-Kent College of Law.

Democrats in the Senate are reluctant to act, because that would mean altering or ditching the antiquated filibuster, which has been tinkered with repeatedly before. What they haven't taken seriously, at least so far, is the constitutional obligation enshrined in the Guarantee Clause, a topic also recently addressed by New York Times columnist Jamelle Bouie: "The United States shall guarantee to every State in this Union a Republican Form of Government."