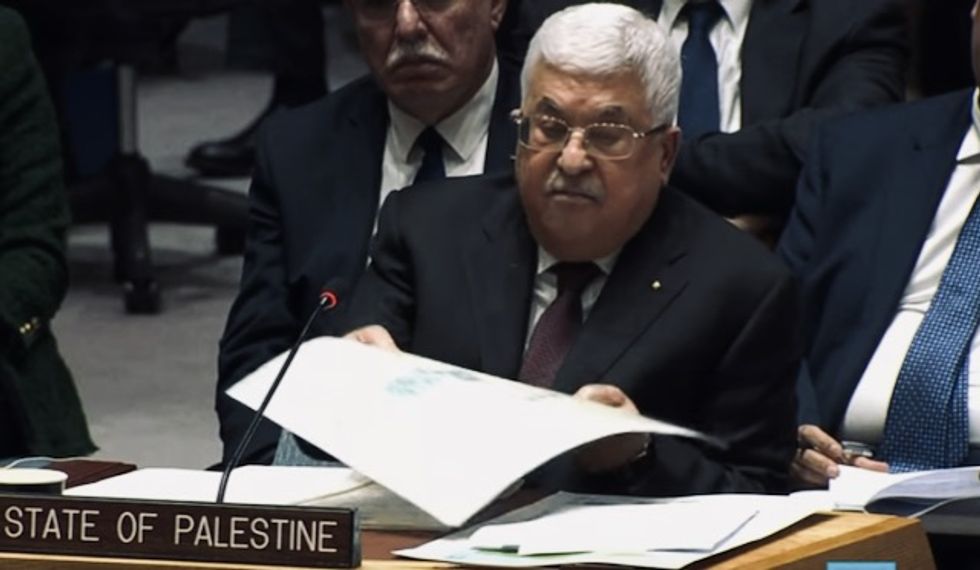 Brandishing a large map of Israel and Palestine as laid out by Trump's long-awaited January 28 announcement, Abbas called it a "Swiss cheese" deal that would limit Palestinian sovereignty.

“This is the summary of the project that was presented to us. This is the state they will give us. It’s like a Swiss cheese, really. Who among you will accept a similar state?” asked Abbas.

The Palestinians have sought to rally international support against the plan, which Trump unveiled alongside Israeli Prime Minister Benjamin Netanyahu, who has since moved forward on plans to annex vast parts of the West Bank.

Addressing members of the UN Security Council in New York, Abbas said he was speaking “on behalf of 13 million Palestinians to call for a just peace”.

The deal would bring neither peace nor stability to the region, said Abbas. “I would like to say to Mr. Donald Trump that his plan cannot achieve peace and security as it cancels international legitimacy. It cancels all the rights of the Palestinians. This does not meet the aspirations of a two-state solution," he said.

"If you impose peace it will not last, it cannot last," he said, asking: "What gives you the right to annex these lands?"

Abbas said that peace with Israel remained "achievable" and said: "I have come to build a just partnership."

"This deal is not an international partnership. This proposal was from one state, supported by another state to be imposed."

UN speech, but no vote

The speech came a day after the Palestinians abandoned their plans for a UN Security Council vote following pressure from the Trump administration on critics of the peace plan.

Introduced by Indonesia and Tunisia, the resolution risked not having nine out of 15 votes in its favour, the minimum required for adoption provided there is no veto by a permanent member.

While details of the diplomatic pressure have not been officially released, John Lyndon of the Alliance for Middle East Peace noted that the vote plan was shelved for two reasons. “The first related to a call for an international conference to discuss the Israeli-Palestinian issue based upon UN Security Council resolutions rather than the details of the Trump initiative, as well as, I think, an unprecedented call for Chapter 7 of the UN charter to be implemented, which would call on the UN to somehow try and implement previous UN Security Council resolutions in Israel and Palestine,” explained Lyndon in an interview with FRANCE 24.

The Palestinian leadership has enjoyed the backing of the Arab League, the Organisation of Islamic Cooperation and, most recently, the African Union, which have all rejected the Trump plan.

But individual countries' positions are more complicated. In the midst of pushing for the UN resolution, Tunisia abruptly withdrew its UN ambassador, raising speculation that the Arab state had come under pressure from Washington.

Jared Kushner, Trump's son-in-law and adviser who has spearheaded his Middle East push, last week said there was a "ton of cracks" in opposition to the plan.

He pointed to divisions within the European Union, particularly from a handful of countries such as Hungary, led by the right-wing populist Viktor Orban.

Of the four EU members that hold seats on the Security Council, two of them – Germany and Estonia – looked ready to abstain from a vote criticising the US plan, diplomats said.

The other two members are France and Belgium. A fifth EU member that was on the Security Council, Britain, left the bloc at the end of last month.

The European Union issued a statement last week reiterating its support for a two-state solution based on the 1967 lines. The Palestinians want to establish a state in east Jerusalem, the West Bank and the Gaza Strip, territories Israel seized in a war with Arab countries a half-century ago.

Israel and the US have been optimistic of winning at least muted backing from Arab states traditionally supportive of the Palestinians, with Gulf monarchies united with Israel in their hostility to Iran.

Netanyahu has hailed Trump's plan, under which Israel would maintain sovereignty up to the Jordanian border even if there is a Palestinian state.

'Trump is part of the problem,' say protesting Palestinians

Meanwhile thousands of Palestinians rallied Tuesday in the West Bank to reject Trump's Mideast initiative and to express support for the Palestinian leadership bid to win UN opposition to the plan.

An English-language banner read “Trump is part of the problem not the solution,” while another condemned the “theft of the century". Arab officials and media refer to the plan sarcastically as the “deal of the century".

"All Palestinian people and all the factions, national and Islamic, are standing behind President Mahmoud Abbas,” Prime Minister Mohammed Shtayyeh told the crowd.

“All the streets are full," he said. "This is the Palestinian response."