Ahead of South Carolina primary, grassroots "I'm a Medicare for All Voter' campaign faces down big-dollar industry ad blitz 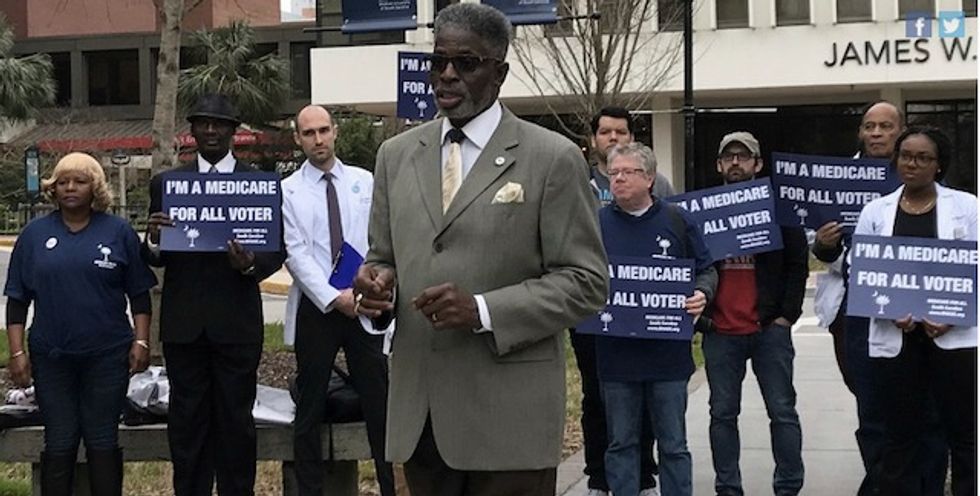 "One of the things that we've found as we've gone around in South Carolina and elsewhere, talking to working people of all sorts, is that people do understand that nobody loves their insurance company."

A grassroots campaign working to build voter support for Medicare for All across South Carolina ahead of the state's Democratic presidential primary on Saturday will have to contend with a six-figure ad blitz launched this week by a powerful healthcare industry lobby group aiming to thwart the possibility of profit-threatening reform.

"What Medicare for All does is takes the profit-making middleman, the insurance companies, out of the healthcare system."

The Partnership for America’s Healthcare Future (PAHCF), an insurance and pharmaceutical industry front group formed in 2018 to combat Medicare for All, bought more than $200,000 in television ads that began airing during Tuesday's Democratic presidential debate in South Carolina and will run in Charleston and Columbia through Saturday.

The 30-second spots characterize Medicare for All and more incremental alternatives like the public option as "one-size-fits all government health insurance systems" that "could double everyone's income taxes."

Wendell Potter, a former insurance executive, told Politico that the South Carolina ad blitz is a "key part" of "the mother of all propaganda campaigns" against Medicare for All.

"As a former health insurance executive," said Potter, "I can tell you that the massive popularity of Medicare for All in these early states would have been my worst nightmare because it threatens billions in profits for corporate executives."

Watch one of the PAHCF ads airing in South Carolina:

Mike Casca, communications director for Sen. Bernie Sanders' (I-Vt.) presidential campaign, told Politico that the industry group's latest onslaught against Medicare for All shows "the health insurance industry is getting nervous because they see a candidate who calls them out on their greed."

"[We're] building the kind of movement to take them on and win," Casca said.

Part of that movement is the "I'm a Medicare for All Voter" campaign in South Carolina, which is organizing to build support for single-payer through community events and voter education sessions across the state. The campaign's website states that "South Carolinians know our healthcare system is in crisis" and "they know there is only one cure: Medicare for All."

Adolph Reed Jr., professor emeritus of political science at the University of Pennsylvania and an organizer with the campaign, told Democracy Now! on Wednesday that more than 10,000 South Carolinians since December have signed pledges "indicating that they'll vote only for candidates who support Medicare for All."

"What Medicare for All does is takes the profit-making middleman, the insurance companies, out of the healthcare system," said Reed, a Sanders surrogate. "And one of the things that we've found as we've gone around in South Carolina and elsewhere, talking to working people of all sorts, is that people do understand that nobody loves their insurance company."

"People who experience the healthcare industry on the ground understand these things, and they understand them much more clearly if the insurance industry is not putting money in their political campaigns," Reed added.

Photo: Medicare for All — South Carolina/Twitter