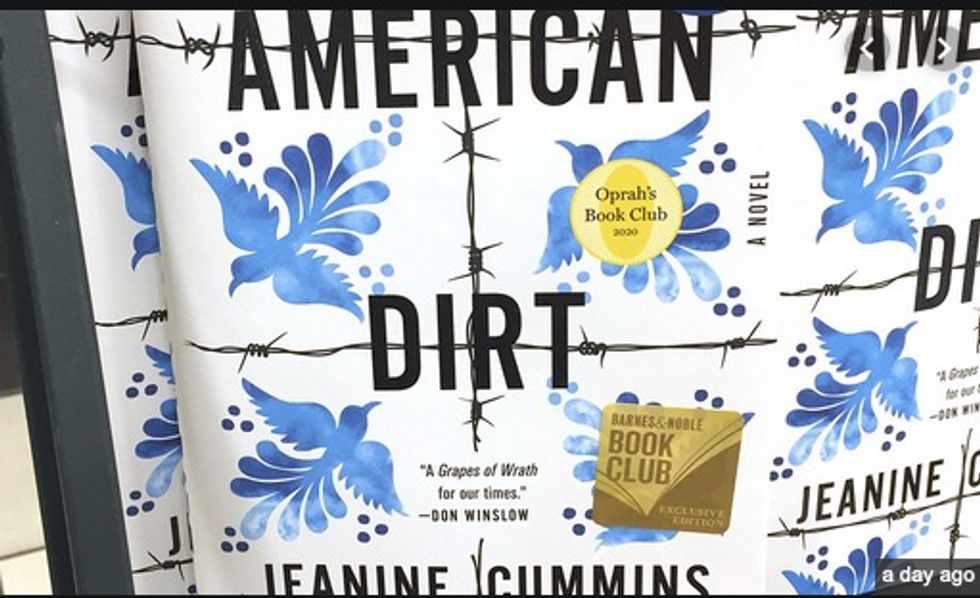 Hailed by luminaries such as Stephen King and Oprah Winfrey, "American Dirt" was touted as the next "great American novel," bought for a seven-figure advance, backed by aggressive marketing and launched last week to great fanfare in both English and Spanish.

Instead of glory, however, author Jeanine Cummins finds herself at the heart of a cultural maelstrom, accused by some of exploiting the tragedy of Mexican migrants in a US election year and of validating stereotypes such as those used by President Donald Trump to fuel his anti-immigration rhetoric.

The book tells the story of a Mexican woman who owns a bookshop and flees on the notoriously dangerous cargo train known as "The Beast" that migrants ride to the north. She also survives the slaughter of almost her entire family by drug traffickers at a traditional birthday celebration.

The book's publication has generated intense debate about cultural appropriation, the marginalization of Hispanic authors by US publishers, the dangers of spreading misrepresentations and the responsible limits of fiction.

The firestorm took publisher Flatiron Books by surprise, and on Wednesday they canceled Cummins' planned tour of US book stores.

"Based on specific threats to booksellers and the author, we believe there exists real peril to their safety," said publisher Bob Miller in a statement.

Horror supremo King described the book as "marvelous" and author Don Winslow compared it to the Steinbeck classic "The Grapes of Wrath".

It is already being adapted for Hollywood.

But more than 120 writers, including Mexico's leading novelist Valeria Luiselli and chicana author Myriam Gurba, whose withering review sparked the debate, have signed a letter calling on Oprah not to feature "American Dirt" in her book club, which has historically been a gateway to massive sales.

"This is not a letter calling for silencing, nor censoring," said the writers, who called the novel "exploitative."

"But in a time of widespread misinformation, fearmongering, and white-supremacist propaganda related to immigration and to our border, in a time when adults and children are dying in US immigration cages, we believe that a novel blundering so badly in its depiction of marginalized, oppressed people should not be lifted up," the letter went on to say.

Mexican actress Salma Hayek put out a selfie of herself with the book, unaware of the controversy erupting around it, then quickly apologized for promoting it.

Photos that Cummins herself posted of a lobster luncheon for the book launch, featuring floral arrangements wreathed with barbed wire -- a nod to the book's cover -- did little to help.

"Border chic," said Gurba on Twitter. "Cruel" and "insensitive," said the authors in their letter to Oprah.

"This is a book that oversimplifies Mexico, uses bad Spanish, and in which the protagonist, a Mexican woman, does things that don't make any sense for a Mexican," said Ignacio Sanchez Prado, a professor of Latin American studies at Washington University in St. Louis, Missouri.

An expert on Mexico, he told AFP he did not believe that only Mexicans can write about the Mexican experience but said that Cummins "did it badly." He also laid the most blame on the "editorial process," lashing out at Flatiron's "ignorance and negligence."

The author of the book, who describes herself as white but also "Latinx" because she has a Puerto Rican grandmother, has not alluded to the controversy in her posts on social media but told The New York Times "there is a danger sometimes of going too far toward silencing people."

"No one intends to censor Ms Cummins," said Daniel Olivas, author of a collection of poems about the US-Mexico border, and one of the signatories of the protest letter sent to Oprah.

"But the promotion of this book as the 'Great American Novel' and 'a dazzling accomplishment' of John Steinbeck proportions is simply galling when so many brilliant Latinx writers are given a mere fraction of such attention and monetary compensation," he said.

Flatiron did not respond to an AFP request for comment on the controversy and an interview with the author.

The publishers said in a statement they were "proud" of the book, but Miller acknowledged that the controversy "has exposed deep inadequacies in how we at Flatiron Books address issues of representation."

"We made serious mistakes in the way we rolled out this book," Miller admitted.

"The concerns that have been raised, including the question of who gets to tell which stories, are valid ones in relation to literature and we welcome the conversation," his statement said.