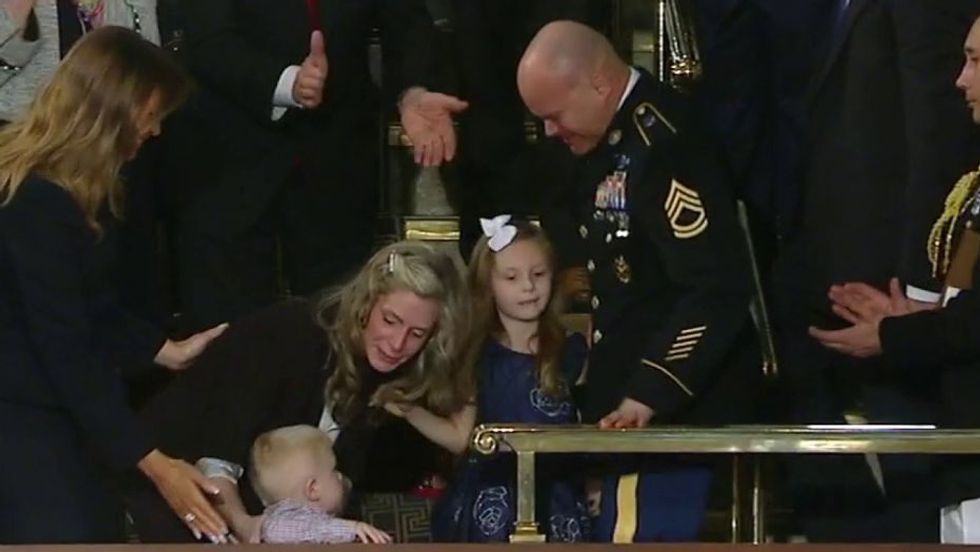 During President Donald Trump’s 2020 State of the Union speech on Tuesday night, February 4, one of the people in attendance was U.S. Army spouse Amy Williams —whose husband, Sgt. 1st Class Townsend Williams, had been deployed in Afghanistan. What Amy Williams didn’t know was that Trump was planning a surprise reunion between the two of them, and the crowd applauded when Townsend Williams appeared. But journalist Alex Horton, in an article published in the Washington Post on February 6, explains that military reunions can be quite different from what the cameras captured during Trump’s State of the Union speech.

Horton explains that some service members get so caught up in their military duties that they are unable to see, first hand, key events with family members back in the United States. For example, Horton notes, army spouse Rebekah Sanderlin gave birth to her second child, Rudy, when her husband was away in Afghanistan — and the child was five months old when, in 2009, he met the child for the first time.

Rebekah Sanderlin, now 43, told the Washington Post, “Coming home is a good moment. You’re happy it’s over. But it’s not a pretty moment. It’s awkward. It feels like it’s an arranged marriage. It’s been so long, and so much has happened. And you both changed so much.”

Although seeing military families reunited can be a feel-good moment, Sanderlin asserts that it’s also important to think about them being separated in the first place. Sanderlin told the Post, “I wish people would think as much about the families ripped apart as much as they enjoy seeing them brought back together.”

Dr. Stephen Xenakis, a retired U.S. Army brigadier general who now works as a child and adolescent psychiatrist, has a problem with military family reunions being filmed. Back in 2011, Horton recalls, Xenakis told the Post, “I would, from a policy standpoint and as a senior Army doctor, say that I would discourage families — and I would discourage the Army — from in any way agreeing to this kind of filming and programming.”