‘As Godless as it gets’: Viewers disgusted as Trump turns the National Prayer Breakfast into a ‘psychopathic’ campaign speech 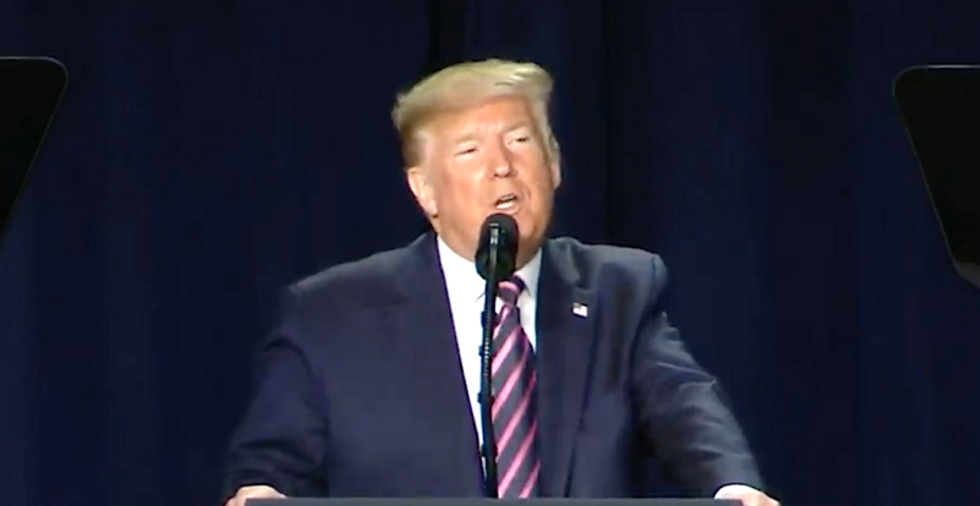 This Thursday morning at the National Prayer Breakfast, President Trump ripped into his political enemies and slammed the impeachment effort as House Speaker Nancy Pelosi sat just a few feet away from him.

"As everybody knows, my family, our great country, and your president have been put through a terrible ordeal by some very dishonest and corrupt people," Trump said. "They have done everything possible to destroy us and by so doing, very badly hurt our nation. They know what they are doing is wrong, but they put themselves far ahead of our great country."

"Weeks ago, and again yesterday, courageous Republican politicians and leaders had the wisdom, fortitude and strength to do what everyone knows was right," he continued.

As word of his rantings got around on Twitter, people expressed disgust that Trump would turn yet another revered tradition into a cudgel for his political grievances:

Only Donald Trump could disagree with scripture and pick a partisan fight at the NATIONAL PRAYER BREAKFAST. Yet eva… https://t.co/fWREtsfGpP
— Justin Hendrix (@Justin Hendrix)1580998999.0

Current occupant of the White House is using the prayer breakfast to say "I don't like people because..." This is… https://t.co/NsdBPfDDVN
— Fred Guttenberg (@Fred Guttenberg)1580999099.0

It's fitting that @realDonaldTrump would use a prayer breakfast to complain about what's been done to him. He still… https://t.co/syIYb0AQB0
— Joe Lockhart (@Joe Lockhart)1580998987.0

Yes, the President just turned the National Prayer Breakfast into an explicit campaign rally for himself. ‘You bett… https://t.co/xCiI87ozUb
— Susan Glasser (@Susan Glasser)1580999063.0

I can’t tell you how inappropriate it is to use the National Prayer Breakfast as a campaign rally like this. The ki… https://t.co/vwvPPhIpr2
— Michael Wear (@Michael Wear)1580999119.0

Trying to sound grave and religious but coming across as a psychopathic serial killer making threats, the failthles… https://t.co/3QYWj5nHjn
— Kurt Andersen (@Kurt Andersen)1580999172.0

Of course he turned the national prayer breakfast into a campaign rally. He doesn’t know how to give a normal speech
— Angry Staffer (@Angry Staffer)1580999290.0

Up to now, the speeches and prayers had been focused on unity and healing. Trump shifts into touting victories and… https://t.co/RtVYLK0Drf
— Tom LoBianco (@Tom LoBianco)1580999188.0

#Trump, again acting the role of the vindictive child this morning at the #NationalPrayerBreakfast, proves the poin… https://t.co/PMdDOb4XQU
— howardfineman (@howardfineman)1581000738.0