'Be patient. This is democracy': Iowa's quirky caucuses 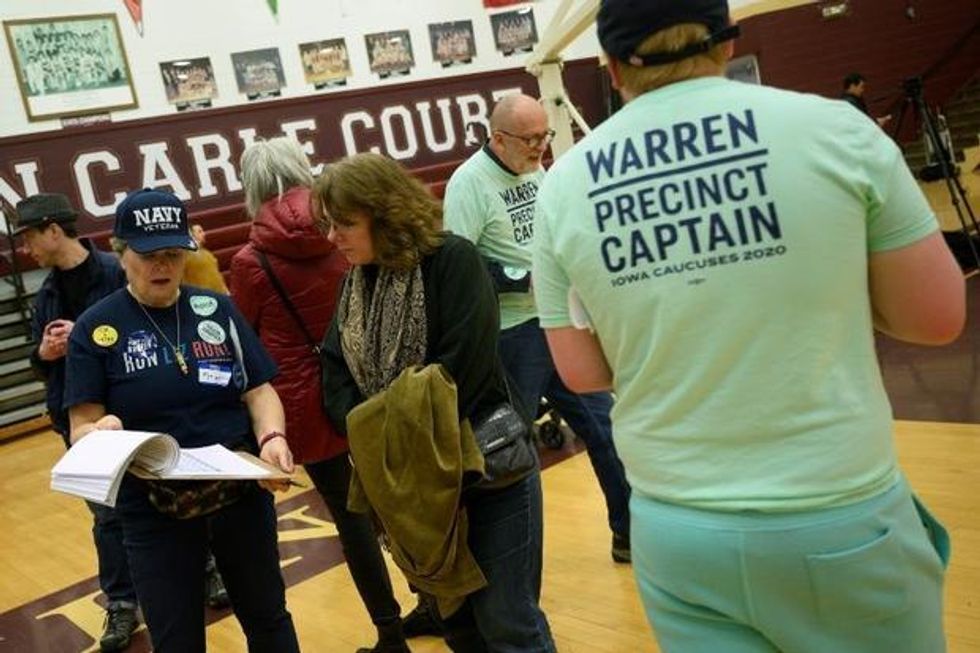 With bursts of laughter, a faulty megaphone, cries of exasperation and some dance steps, US Democrats took their time Monday evening to kick off the election season with a curious voting system: the Iowa caucuses.

Among the nearly 1,700 sites at which they gathered in the first state to select its Democratic nominee was a high school in Des Moines.

Voters who were grouped behind the banner of their favored candidate yelled that they couldn't hear anything when an official tried to explain the voting rules.

"Please be patient. This is democracy," an organizer said, reassuringly, before starting to count the number of voters present on a basketball court at Abraham Lincoln High School.

Voters in this rural state, near the center of the country, physically demonstrate their candidate choice by standing with others who support him or her.

In the middle of the room is an orange cone, where undecided voters can gather. No one is standing next to it.

"If you want a guy who can beat Trump in 2020, come join us!" called out an organizer for far-left Senator Bernie Sanders.

"A solid leader that can walk in on day one and take charge," offered an organizer for former vice president Joe Biden, using the still-malfunctioning megaphone.

If a candidate -- there are 11 in the Democratic contest to go up against President Donald Trump in November -- doesn't get 15 percent support, the followers can back another in a second round.

Entrepreneur Andrew Yang, a political novice and relatively unknown a year ago, has been eliminated at this caucus hall. Supporter Mandee Raichel was disappointed but, after some hesitation, decided to join Sanders's group. She noted her choice on a posterboard, one of the novelties of the caucus.

She was stuck "between Bernie and Buttigieg. My heart told me to go for Bernie," the 25-year-old told AFP.

It's a process that takes time.

But not enough to discourage Lane and Michelle Mose, a thirty-something couple who arrived with their three daughters aged four, two and six months.

Usually, the little ones go to bed at 7:30 pm, but on this night, at 8:00 pm -- one hour after the official start of the Iowa caucus -- they were still awaiting the first round, armed with snacks and coloring books.

They had come to support Sanders, who leads in polls throughout Iowa.

"I think anybody can beat Donald Trump, but I think Bernie has the best chance," Lane said.

Following a rough start to voting in some halls, like this one, the results were taking a long time to process -- much longer than in previous years.

"Come on down to Bernie. Feel the Beeeeeeeern," called an organizer, laughing, for the self-described democratic socialist.

Mike Wieskamp, a "precinct captain", was organizing the corner for supporters of Biden, who is polling behind Sanders in Iowa but leading nationally.

Wearing a T-shirt and a Biden badge, Wieskamp said things were proceeding in a "cordial" way so far.

"So far everybody is kind of just keeping to their space," he said. "No one's getting, you know unruly yet."

But when it comes to pulling in supporters in a second round, it could get "a little testy maybe."

Dancing to Dolly Parton's song "9 to 5", the theme song of progressive Senator Elizabeth Warren, US Navy veteran Megan Kee, 69, said she was "enthusiastic" for fourth-place Warren.

"There's two rounds. As long as we get close to the 15 percent, we'll round up enough" to reach the threshold on the second round, Kee said.

Between candidates' teams, relations have remained "pretty friendly," Kee added. She pointed to an organizer for moderate senator Amy Klobuchar.

"He's my next-door neighbor, and we're still talking. Aren't we, Steve?" she asked as they both laughed.