'Because I got 6,000 more votes': Bernie Sanders declares victory in Iowa caucus 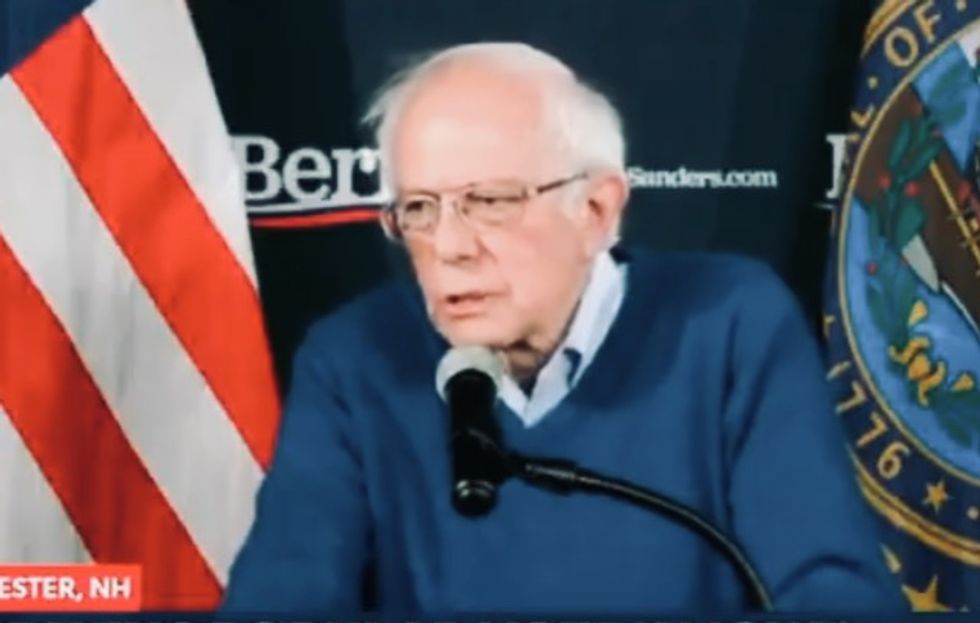 "From where I come, when you get 6,000 more votes that's generally regarded to be the winner."

Touting his 6,000-vote lead over Pete Buttigieg with 97% of Iowa Democratic caucus precincts reporting, Sen. Bernie Sanders on Thursday declared victory in the first-in-the-nation presidential contest and slammed the state Democratic Party's handling of the process as "extremely unfair to the people of Iowa" and the entire 2020 Democratic presidential field.

"What I want to do today, three days late, is to thank the people of Iowa for the very strong victory they gave us at the Iowa caucuses on Monday night," Sanders said during a press conference in Manchester, New Hampshire. "Even though the vote tabulations have been extremely slow, we are now at a point with some 97% of the precincts reporting where our campaign is winning the popular initial vote by some 6,000 votes."

"When 6,000 more people come out for you in an election than your nearest opponent, we here in northern New England call that a victory."

"In other words, some 6,000 more Iowans came out on caucus night to support our candidacy than the candidacy of anyone else," the Vermont senator added. "And when 6,000 more people come out for you in an election than your nearest opponent, we here in northern New England call that a victory."

The latest batch of caucus results released by the Iowa Democratic Party early Thursday morning show Sanders ahead of Buttigieg in the first alignment popular vote 42,672 to 36,718—a lead of 5,954 votes. In the final alignment popular vote, as Common Dreams reported ealier, Sanders is leading Buttigieg by more than 2,500 votes—44,753 to 42,235.

Sanders' declaration of victory came just hours after Buttigieg, in a conference call with supporters Wednesday night, claimed victory in the Iowa caucus and called himself "the momentum candidate."

Asked Thursday why the public should believe his victory declaration over Buttigieg's, Sanders responded, "Because I got 6,000 more votes."

"And from where I come," Sanders added, "when you get 6,000 more votes that's generally regarded to be the winner."

Sanders brushed aside news that Democratic National Committee chairman Tom Perez demanded that the Iowa Democratic Party immediately "recanvass" the results of the caucus, emphasizing that he won the popular vote and that he and Buttigieg are likely to emerge from the process with the same number of national pledged delegates.

"We won an eight-person election by some 6,000 votes," Sanders said. "That is not going to be changed."

"The 2020 Iowa caucus was never about the number of DNC delegates. It was always about the momentum story," tweeted Becky Bond, a former aide to Sanders and who worked on Beto O'Rourke's presidential campaign last year, following Thursday's press conference.

Major news outlets and prominent journalists covering the primaries should "change their criteria for declaring a winner in Iowa to the popular vote," Bond added, and should do so "while it still matters."