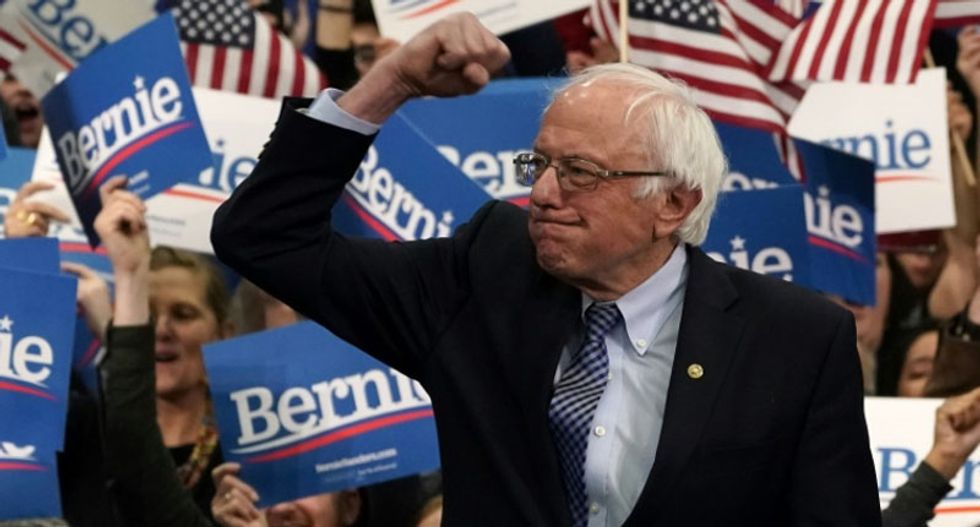 US Senator Bernie Sanders cemented his newly-minted frontrunner status in the Democratic presidential nomination race with a win in New Hampshire. (AFP / TIMOTHY A. CLARY)

Bernie Sanders and Pete Buttigieg stepped forward Wednesday as undisputed frontrunners in the race to take on President Donald Trump in November after finishing first and second in the New Hampshire primary.

The 78-year-old leftist senator from neighboring Vermont and the young former mayor of South Bend, Indiana took 26 and 24 percent of the votes in Tuesday's voting. Last week in Iowa's caucuses they also finished as the top two -- with Buttigieg narrowly beating Sanders.

Meanwhile, Joe Biden tried to sound optimistic after his sagging campaign took another awful hit with a fifth-place showing, behind Elizabeth Warren, the Massachusetts senator whose star also has dimmed.

And the race lost its last African-American presidential hopeful with the departure of former Massachusetts governor Deval Patrick.

The eight candidates left will now turn their attention to primaries in Nevada on February 22 and South Carolina on the 29th. Looming is the big prize of so-called Super Tuesday on March 3, when 14 states hold their primaries.

"Our victory in New Hampshire isn’t about me. It’s about us. It's about the movement our supporters, volunteers and grassroots donors built, which will transform this country," Sanders tweeted. On Tuesday night he told jubilant supporters his win marked "the beginning of the end for Donald Trump."

Still, Sanders' margin of victory was leaner than polls had predicted. In the 2016 campaign he took a whopping 60 percent of the votes in New Hampshire, finishing far ahead of Hillary Clinton.

The race for the nomination is long and unpredictable, but for now Sanders is a source of worry for those in the party who fear that, with his sweeping and expensive health care reform proposals, he is too far to the left to beat Trump.

"I’m afraid. I’m afraid because if Bernie wins it, half the country is going to side with socialism," Robert Burrows, a 35-year-old mechanic in Manchester, told AFP.

"I think it could ruin, destroy the country. It will bankrupt the country," said Burrows.

The race to represent the centrist wing of the party is up for grabs among Buttigieg, Senator Amy Klobuchar, who finished a solid third in New Hampshire, and former New York mayor Michael Bloomberg, who entered the race late and skipped Iowa and New Hampshire. He is paying for his campaign with his vast personal fortune.

Then there's Biden, the one-time frontrunner in the race banking on his instant name recognition as Barack Obama's vice president and his 50 years of public service. He got only eight percent of the votes.

A new Quinnipiac University poll said this week that Biden has skidded nationally from 26 to 17 percent support since the end of January.

Biden insisted Tuesday night -- from South Carolina, after all but giving up on New Hampshire -- the primaries are just getting started and he is stronger than his rivals among Latinos and blacks.

"Nobody told me the road would be easy, but together we can and will win," he tweeted Wednesday.

Buttigieg is languishing at 10 percent in the latest national polls and has negligible support among African-Americans in upcoming states with more diverse populations.

Iowa and New Hampshire are predominantly white and contribute just a handful of delegates to the nominating convention this summer.

But it is not just a numbers game: early primaries are all about momentum, and a win draws media coverage and stimulates fund-raising. A string of defeats and you are probably out.

The only person of non-white ethnicity left in the Democratic field is part-Samoan Tulsi Gabbard, a congresswoman from Hawaii.

But well-known black politicians Senator Kamala Harris and Senator Cory Booker, and Latino Julian Castro, the former mayor of San Antonio, Texas, dropped out ahead of the Iowa caucuses.

Competing for the support of voters defecting from Biden, Bloomberg is focusing on Super Tuesday on March 3, spending a record $260 million of his personal fortune on his campaign.