Britain embarks on its future outside EU 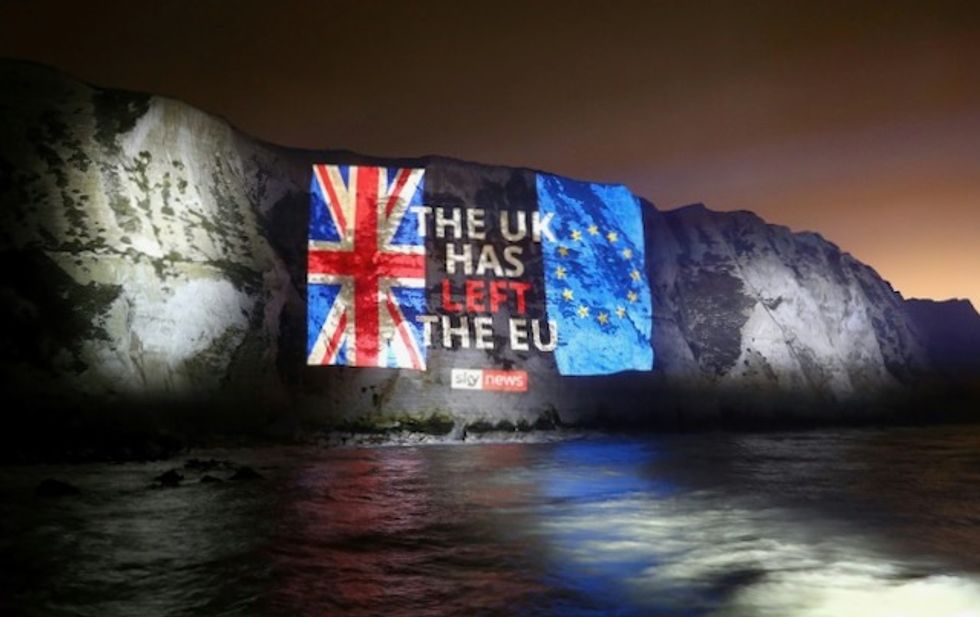 Britain began an uncertain future outside the European Union on Saturday after the country greeted the historic end to almost half a century of EU membership with a mixture of joy and sadness.

There were celebrations and tears on Friday as the EU's often reluctant member became the first to leave an organisation set up to forge unity among nations after the horrors of World War II.

Little has changed as of Saturday as the UK is now in an 11-month transition period negotiated as part of the divorce.

Britons will be able to work in the EU and trade freely -- and vice versa -- until December 31, although the UK will no longer be represented in the bloc's institutions.

But legally, Britain is out.

AFP / Tolga AKMEN A digital Brexit countdown clock was projected onto the front of 10 Downing Street, the official residence of Britain's Prime Minister

Prime Minister Boris Johnson -- a figurehead in the seismic 2016 referendum vote to leave -- held a private party in his Downing Street office with a clock projected on the walls outside counting down the minutes to departure.

In an address to the nation, he hailed a "new era of friendly cooperation" acknowledging there could be "bumps in the road ahead" but predicting the country could make it a "stunning success".

"The most important thing to say tonight is that this is not an end but a beginning," he said.

At a "Big Brexit Bash" in the market town of Morley, northern England, Raymond Stott said he was "glad it's all over" after years of political gridlock and acrimony.

"We will look after ourselves. We don't need Europe," said the 66-year-old.

However, Brexit has exposed deep divisions in British society and many fear the consequences of ending 47 years of ties with their nearest neighbours.

Some pro-Europeans, including many of the 3.6 million EU citizens who have made their lives in Britain, marked the occasion with candlelit gatherings.

There was a sombre atmosphere among passengers on one of the last ferries to leave the European mainland pre-Brexit and make the 42-kilometre (26-mile) journey across the English Channel.

"It's very depressing what's happening today," said Alessio Bortone, an Italian who has lived in Britain for 10 years.

Some Britons in southern Spain celebrated in bars but for many pro-Europeans Friday marked a day they hoped would never come.

Brexit has also provoked soul-searching in the EU about its future after losing a country of 66 million people with global diplomatic clout and the financial centre of the City of London.

French President Emmanuel Macron described it as a "historic warning sign" that should force the EU and its remaining nations of more than 440 million people to stop and reflect.

Britain's diplomatic mission in Brussels sent an employee out early on Saturday to change the building's nameplate to read "UK Mission to the European Union", signalling its new non-member status.

While the divorce terms have been agreed, Britain must still strike an agreement on future relations with the EU, its largest trading partner.

Both will set out their negotiating positions on Monday.

But Johnson, a polarising figure accused of glossing over the complexity of leaving the EU, has given himself just 11 months to negotiate the new partnership -- not enough time, according to his critics.

London is now free to strike trade deals around the world, including with the United States, where US President Donald Trump is an enthusiastic supporter of Brexit.

One of his top envoys on Friday hailed an "exciting new era".

At a special Brexit day ministers' meeting in Sunderland in northeast England, Johnson discussed an aim to get 80 percent of Britain's commerce covered by free trade agreements within three years, a spokesman said.

Julian Braithwaite, UK Permanent Representative to the WTO in Geneva, said on Saturday he had formally notified all members of Britain's EU departure.

"The UK will now represent itself in the WTO, supporting the global trading system which we were instrumental in founding, and advancing our economic interests," he tweeted.

Getting to this point has been a traumatic process.

Britain resisted many EU projects over the years, refusing to join the single currency or the Schengen open travel area, and eurosceptics have long complained about Brussels bureaucracy.

Worries about mass immigration added further fuel to the Brexit campaign while for some, the 2016 vote was a chance to punish the government for years of cuts to public spending.

But the result was still a huge shock.

It unleashed a period of toxic social and political division that paralysed parliament and forced the resignations of prime ministers David Cameron and Theresa May.

Johnson's decisive election victory in December changed the dynamics, giving him the parliamentary majority needed to ratify his Brexit deal.

"Rise and shine... It's a glorious new Britain," said the Brexit-supporting Daily Express. The i newspaper, in contrast, headlined: "What next?"

In Scotland, where a majority voted to remain in 2016, Brexit has revived calls for independence.

First Minister Nicola Sturgeon tweeted: "Scotland will return to the heart of Europe as an independent country -- #LeaveALightOnForScotland."

In Northern Ireland -- soon to be a new EU frontier -- there are fears Brexit could destabilise a hard-won peace after decades of conflict over British rule.

"They're going to have problems probably, sorting everything out with the border up the Irish Sea," said Thomas Glover, 77, alluding to possible trade frictions between mainland Britain and the divided island.