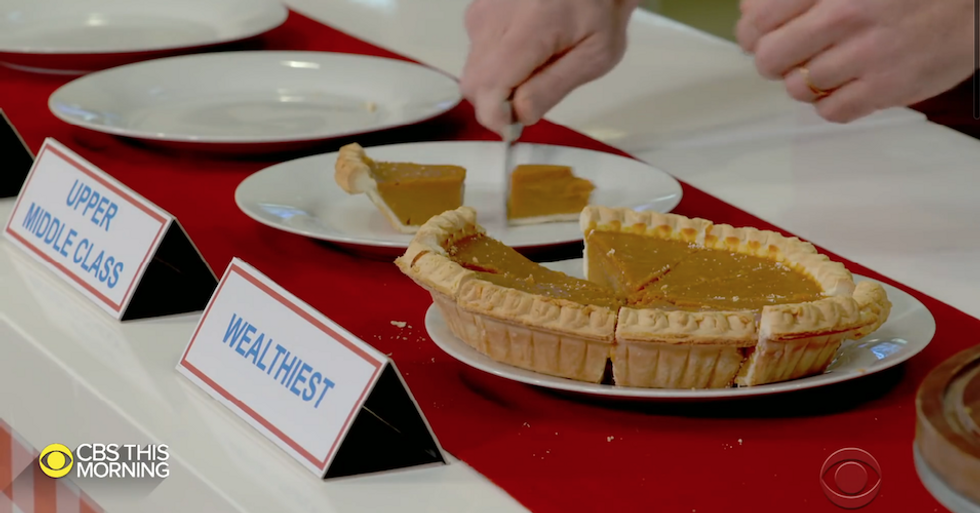 A four minute video that aired on CBS Friday morning was praised for using slices of real pie to show the huge wealth gap in the U.S.—surprising passers-by who joined anchor Tony Dokoupil at a table set up at a mall in West Nyack, New York.

In the video, Dokoupil asks passers-by to divvy a pie sliced into ten pieces onto plates for quintiles of the U.S. based on income, top 20%, next 20%, etc.

Even the most cynical participant didn't come close to the real amount—nine pieces for the top 20% of Americans and the bill for the lowest 20%.

Later in the segment, Dokoupil asks people at a yacht fair what they think of policies from 2020 Democratic presidential nomination hopefuls Sens. Bernie Sanders (I-Vt.) and Elizabeth Warren (D-Mass.) that would narrow the wealth gap.

Unsurprisingly, yacht owners were unenthusiastic about the idea of a wealth tax or other redistributive policies.

"It would be a total disaster," private equity manager John Sheffield told Dokoupil.

The video, said journalist Justin Kanew, makes clear the stakes in the 2020 presidential election and beyond.

"You're either with the yacht guys, or the people," said Kanew.