Christian Nationalism was the big loser of last night's debate 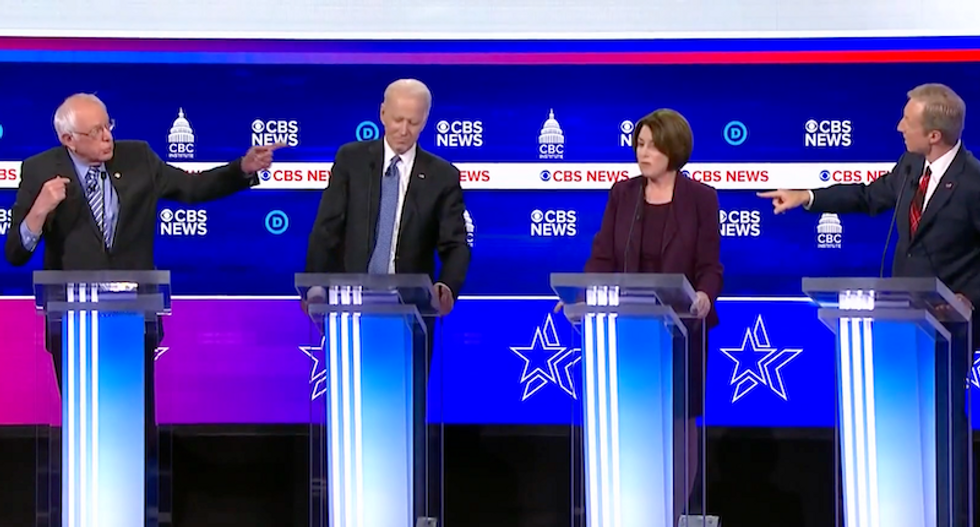 If you’re pondering the question of who won last night’s final Democratic primary debate, one possible answer, depending on your perspective, is secular Americans. Religion, after all, hardly came up in the raucous affair hosted jointly by CBS News and the Congressional Black Caucus Institute in Charleston, SC.

As divisive as Sanders is within some sectors of the party, a CBS News Instant Poll found that Independent Vermont Senator Bernie Sanders, who is nothing if not secular, made the best impression on Democratic voters who watched the debate. He was followed closely by Biden, Warren, and Buttigieg, with Klobuchar, Bloomberg, and Steyer bringing up the rear.

But did secular Americans really come out the big winners of last night’s debate? Before treating this answer as the gospel truth, it’s important to consider that there are times when, given the power and influence of religion in both domestic politics and geopolitics in today’s world, politicians’ failure to mention religion may be harmful. And no, I don’t mean they should say “God bless America” or other such Christian nationalist claptrap, the absence of which was refreshing in last night’s otherwise circus-like debate. I’ll come back to what I do mean.

Today’s authoritarian GOP is the party of white Christians and those who are willing to support an extreme Christian nationalist agenda. Today’s Democratic Party has thus become the party of literally everyone else who chooses to affiliate with one of the major parties in our broken two-party system.

This situation makes for a messy coalition, but it also provides Democrats with the opportunity to model the healthy navigation of pluralism, and thereby to further the dismantling of white, male, straight, and Christian supremacism in the United States. In my view, the Democratic National Committee made a powerful stride in this direction when it passed a resolution back in August acknowledging the contributions of secular Americans.

The two candidates on last night’s debate stage most prone to God talk, Senator Elizabeth Warren and South Bend Mayor Pete Buttigieg, both spoke of their faith in ways that, to my mind, are entirely appropriate for a pluralist party that respects the original meaning of “religious freedom” as the liberal value that it is. Speculation about wunderkind Buttigieg’s ability to win over white evangelicals because he speaks so powerfully of his faith is nonsense, but there is something compelling in the sincerity of his religious language. Last night, for example, when candidates were asked about their personal mottos and motivations at the end of the debate, Buttigieg, before quoting scripture, went out of his way to assert that he would never try to force his views on anyone else.

Using I-statements rather than prescriptive or collective language, Buttigieg explained that he strives to live by the Golden Rule and the notion that “if you would be a leader, you must first be a servant,” a reference to Matthew 20:26. Similarly, Warren claimed that her personal motto comes from Matthew 25, quoting verse 40—interestingly, from the King James Version: “Inasmuch as ye have done it unto one of the least of these my brethren, ye have done it unto me.”

My motto ties in directly to Matthew 25: Inasmuch as ye have done it unto one of the least of these my brethren, ye… https://t.co/EYsvbaLZPT
— Elizabeth Warren (@Elizabeth Warren) 1582686718.0

It is not at all a bad thing if, alongside the full recognition of the dignity and equality of non-believers, the Democratic Party embraces leaders who find personal meaning in passages of the Bible associated with social justice Christianity, in sharp contrast to the Christian Right’s ugly and vicious politics toward minorities, women, members of the LGBTQ community, immigrants, and the poor, which right-wing Christians support with their own biblical interpretation, as I have pointed out here and here.

But what of the earlier assertion that the failure to mention religion can sometimes be a problem? On this front, I submit as evidence last night’s debate question about Israel and whether the next American president should try to move the U.S. Embassy back from Jerusalem to Tel Aviv. Before proceeding, I must first pause to arch an eyebrow at the way this question was only posed directly to the Jewish candidates, as Twitter user @JillSteinberg3 pointed out: "Apparently the question was directed only at the Jews on the stage. So very bizarre. My heart sunk."

It was good to see Sanders and Warren both argue for the U.S.’s traditional foreign policy goal of a two-state solution, which the Trump administration has done so much to undermine, and Sanders’ willingness to state outright that Israeli Prime Minister Benjamin Netanyahu is racist. Neither of them had much to say about religion in their answers, whereas former Republican New York City Mayor Michael Bloomberg, the billionaire looking to play savior, spoke of religion in a problematic and unhelpful way when he referenced “two groups of people, both of whom think God gave them the same piece of land,” as if all Jews and Muslims, or even all Israeli Jews and Palestinians, believe any such thing.

Of course, there are those Muslims and Jews who do believe God gave them “the same piece of land,” and these disputes are a major factor in play when it comes to the difficulty of achieving a two-state solution and Middle East peace, even if many partisans on both sides are hardly pious. But what about Christians? This is where it was most troubling to see religion not addressed in the debate. So, via an admittedly unscientific poll, I asked Twitter whether the Democratic candidates should have brought up the connection between evangelicals and Israel last night, and received a variety of answers:

@C_Stroop I don't see the wisdom in mentioning evangelical support for Trump at that level. It won't set the libe… https://t.co/QgvWCK8VsN
— Levisaurus Rex (@Levisaurus Rex) 1582685664.0

@C_Stroop It is complicated and nuanced for a short discussion and could trip up & alienate potential voters
— Stephanie Boyle (@Stephanie Boyle) 1582692881.0

In any case, Donald Trump’s foreign policy decisions regarding Israel have been shaped almost entirely by America’s apocalyptically minded white evangelicals, and not by Jews at all. It’s evangelicals’ beliefs about Israel’s role in “fulfilling biblical prophecy” that resulted in Trump upending decades of American foreign policy by moving the embassy in the first place as a gesture of recognition of Jerusalem as the capital of Israel. If we just glance at the pastors he invited to speak at the embassy’s opening—Robert Jeffress and John Hagee—the base to which he is playing could not be any clearer.

To say much about this in last night’s contentious debate, where time was short and nuance not easily achievable, may have been difficult and tactically fraught. Nevertheless, if Democrats are serious about dismantling Christian supremacism in America, something on which I believe America’s future as a democracy of any kind hinges, they, along with our major media outlets, are going to have to become more willing to confront Christian nationalists and fundamentalists head on as the dangerous, destabilizing, anti-democratic forces they are. Let our Christian nationalists cry “persecution” all they want. The simple truth is that when they have more or less achieved a hostile takeover of our government, we can no longer afford to coddle them.