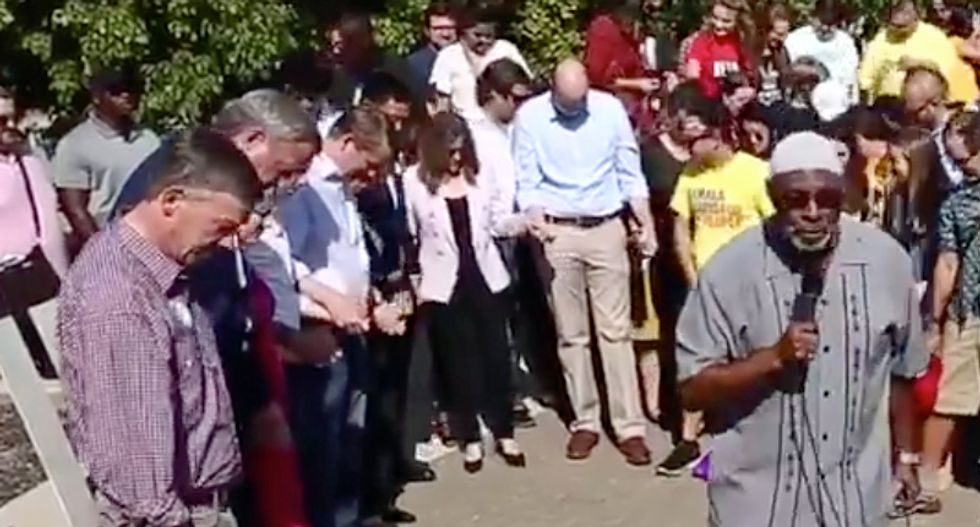 Americans kicked off the first vote of the 2020 presidential race Monday in Iowa, but delayed results in the state's Democratic caucuses triggered hours-long waits and growing confusion on the ground.

Iowa is a closely-watched test for the frontrunners, far-left Senator Bernie Sanders and moderate former vice president Joe Biden, in the months-long process to determine who will face President Donald Trump in November.

But with organizers yet to publish any official results four hours in, the tension was palpable among caucus-goers and Democratic campaigns -- while in television studios news anchors were left filling in the blanks with guesswork.

In a statement read on US networks, Mandy McClure, communications director at the Iowa Democratic Party, said further checks were ordered after "inconsistencies" were found in the reporting of three sets of results.

"This is simply a reporting issue," he said, denying there was "a hack or an intrusion" -- as Republicans including Donald Trump Jr rushed to suggest either incompetence or foul play by the Democratic leadership.

Held across nearly 1,700 sites, the Iowa vote offers a critical early look at the viability of the 11 Democrats still in the race -- even though just 41 delegates are up for grabs, a fraction of the 1,991 needed to secure the nomination in July.

It appeared the delays may have been exacerbated by new rules that the state's Democratic Party instituted after the 2016 election that now require caucuses to report three sets of numerical data rather than one set previously.

As the waiting dragged on, the candidates seized the chance to speak directly to voters with live television addresses -- each making the so far indisputable claim to have beaten expectations.

"When those results are announced I have a good feeling we're going to be doing very, very well here in Iowa," Sanders told loudly cheering supporters.

"Tonight in this enormously consequential 2020 election, the first state in the country has voted, and today marks the beginning of the end for Donald Trump."

Biden likewise rallied his supporters, telling them: "It's going to be a long night, but I'm feeling good."

"So it's on to New Hampshire, Nevada, South Carolina, well beyond. We're in this for the long haul."

Senator Amy Klobuchar struck a similarly upbeat tone, saying: "We know there's delays but we know one thing, we are punching above our weight!"

Typically at 11:00 pm in Iowa on the night of a caucus, the large majority of results would already be reported.

One party official took matters into his own hands, announcing the results of his precinct via social media.

"I've been on hold for over an hour to report the results," tweeted Shawn Sebastian, the caucus secretary for Story County Precinct 1-1.

He reported that final results from his caucus showed Sanders with 116 votes, Senator Elizabeth Warren with 82 and former South Bend, Indiana mayor Pete Buttigieg with 73.

Sanders and Biden had been leading the polls in Iowa, followed by centrist Buttigieg and progressive Warren.

But polling has fluctuated and Iowa's caucus system -- where voting is not by secret ballot but by public declaration for a candidate -- can make the night hard to predict.

Unlike secret ballot voting, caucus-goers publicly declare their presidential choice by standing together with other supporters of a candidate.

Candidates who reach 15 percent support earn delegates for the nomination race while supporters of candidates who fall short can shift to others.

As the White House nomination race kicked off in Iowa, another hugely consequential political process was nearing its conclusion: the Senate impeachment trial of Trump, the man Democrats hope to see off in the election exactly nine months away.

Trump is almost certain to be acquitted Wednesday by the Republican-led chamber on charges of abuse of power and obstruction of Congress.

Three Democratic candidates -- Sanders, Warren and moderate Amy Klobuchar -- have faced the unprecedented scenario of spending much of the past two weeks tethered to Washington for the impeachment trial instead of on the campaign trail.

Even at the 11th hour, the senators were obligated to return to Washington for the trial's closing arguments Monday.

Biden -- who still holds the lead in national polls -- spent the weekend crisscrossing Iowa in a final push to convince undecided voters he is best placed to accomplish Democrats' number one goal: defeating Trump.

The president has not stood idly by. On Sunday he branded Biden "Sleepy Joe" and described Sanders as "a communist," previewing a likely line of attack were Sanders to win the nomination.

Running virtually unchallenged, Trump himself was "overwhelmingly" confirmed as the Republican nominee in Iowa Monday, the party said.