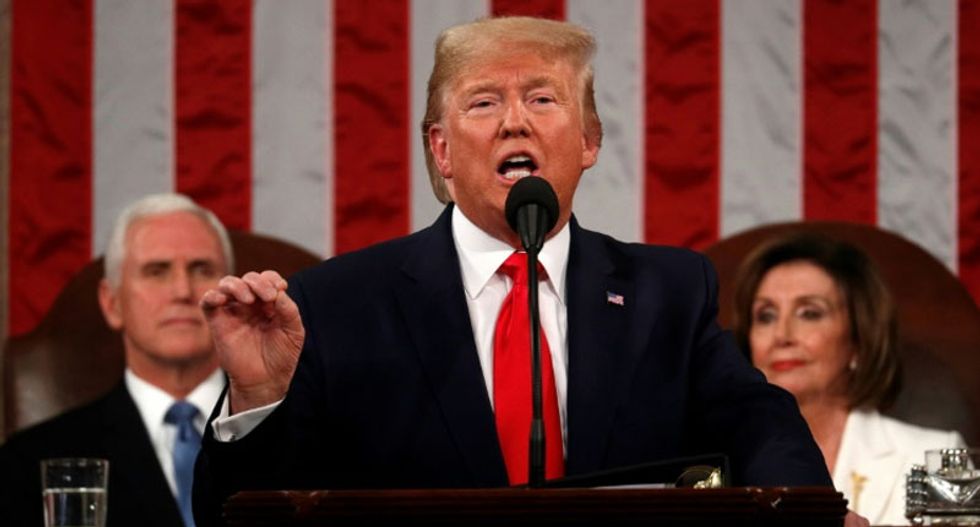 As Dear Leader wound up his State of the Union, and Nancy Pelosi tore its pages in quarters as she stood behind him, I had the same reaction that many colleagues out in the Twitter universe had. We all instantly recalled George W. Bush’s words at the end of Donald Trump’s inaugural address in 2017: “Well, that was some weird shit.”

Except that Trump’s speech wasn’t just weird, it was some Nuremberg shit, too, the rhetoric and Republican hysteria in the hall all too reminiscent of those terrifying days of the 1930s when Adolf Hitler harangued adoring crowds, the whole spotlighted production designed for Leni Riefenstahl’s cameras, with the intimidation dial turned up to 11.

Trump’s State of the Union wasn’t in a stadium filled with tens of thousands of Nazis, but it was similarly camera-ready, fueled by craziness as it took advantage of every reality show trick he learned during his years posing as an ersatz billionaire on The Apprentice.

As Philip Rucker and Carol Leonnig point out in their bestseller, A Very Stable Genius, Trump cares “more about putting on a show than about the more mundane task of governing.” He’s terrifyingly good at the razzle-dazzle, vectoring in on the good old lowest common denominator that television made so famous – although he’s not as interested in what will least offend as he is in whatever will most stir up his frightened, angry base.

Example: Presidents have been using the yearly address to headline heroes since 1982, when Ronald Reagan pointed to the presence in the gallery of government employee Lenny Skutnik, who had rescued a plane crash survivor from the frigid waters of the Potomac. It quickly became a way for the commander-in-chief to associate himself with heroes and others whose life experiences illustrated key points in the State of the Union.

These attempts to include a little human interest or have some glory rub off on the chief executive have sometimes been heavy on the hokum but largely harmless and often even touching. Tuesday night, though, Trump took what has been a fairly benign tradition and turned it into a game as cynical and manipulative as that old TV show Queen for a Day, on which housewives won prizes for whomever had the most poignant and/or tragic life’s story.

There was Retired Brigadier General Charles McGee, 100 years old, one of the last of the legendary Tuskegee Airmen, fresh from the Super Bowl coin flip on Sunday, his presence moving for sure but part of the Trump effort to peel away African American voters from the Democrats. He was there with his great-grandson who Trump says wants to be part of his mighty Space Force. Phasers on stun!

There, too, were Stephanie and Janiyah Davis from Philadelphia, Pa., a single mom and her fourth-grader who had hoped to get a tax credit scholarship for private school. Trump announced he was awarding it to her because “no parent should be forced to send their child to a failing government school”—“government school” now the conservative buzz words for public education, a hard-won system essential to democracy but which the hard right is determined to destroy as they continue their push to dumb down the populace even further.

There was the Iraqi war widow and the brother of a man shot by an undocumented immigrant—Trump would never ever mention that in truth, the immigrant crime rate is lower than the general population’s. There was the staged reunion of a military family—live and in person! And of course, the horrifying image of Melania Trump wrapping the presidential medal freedom around the neck of talk show host Rush Limbaugh, the purveyor of decades of vitriolic hatred against any and all minorities.

No one deserves cancer, but, “It’s impossible to find a topic on which Limbaugh hasn’t been odious,” Mark Sumner writes at Daily Kos. “On which he hasn’t been intentionally hurtful. On which he hasn’t been cruel, spiteful, and deceitful. It’s difficult to find a single admirable quality in the man, either on the air or off.” And so, the perfect choice for an honor from a dishonorable Trump.

The speech itself was aswarm with Limbaugh-style lies, mendacity being the currency of choice at the White House and within the Republican Party—“chock-full of stretched facts and dubious figures,” as per The Washington Post. “Many of these claims have been fact-checked repeatedly, yet the president persists in using them.”

The Post cites 31 statements, pointing in detail to his false claims about the economy, his brags about unemployment rates for minorities and the disabled, his claims that no one—no one!—has done better than he.

“Trump never seems to remember — or prefers to forget — that Obama took office during the worst economic crisis since the Great Depression,” the paper reports, and Associated Press notes, “Trump never quite managed to achieve the liftoff he promised during the 2016 election. Instead, gains have largely followed along the same lines of an expansion that started more than a decade ago under Obama.”

Nothing about climate change. Lies about criminal justice reform, trade, energy independence, immigration and that damned wall, guns, health care! “We will always protect patients with preexisting conditions,” he declared, even though his administration supports a current court case that would completely repeal the Affordable Care Act.

And so forth and so on, ad nauseum. A celebration not of the State of the Union but the State of the Mighty Me. Massachusetts Congressman Joe Kennedy said, “Working Americans struggle to make ends meet, vulnerable neighborhoods pay the price of a changing climate, desperate patients crowd source medical bills and communities of color battle systemic and overt racism, yet this President chooses self-adoration over solutions.”

The problem is that this weird Nuremberg shit is working. If you’re not paying attention, chances are it sounds great, and if you’re someone living in white fear or more focused on just getting by, you simply may not care or even notice that Donald Trump is systematically eviscerating every branch of government, every law, every regulation, any semblance of moral behavior.

The fat cats don’t seem to mind either, looking the other way from Trump’s ignorant, corrupt and contemptible behavior as long as the cash register keeps ringing and the fuel’s topped off on their private escape jets to New Zealand.

Donald Trump reigns over an ugly Cloud Cuckoo Land of his own making, much of it only existing in his addled brain. He calls it The Great American Comeback, but while Republicans collapsed from the vapors as Speaker Pelosi ripped apart pages of The Gospel According to Donald, he rips apart the Constitution and tears asunder the families of immigrants, families of the poor and helpless.

Some comeback. Better to rephrase that sentiment, better to implore our nation to Come Back, America, to return us to a place where we can try to uphold decency and the rule of law, where we can organize and vote, where we can endeavor to restore the values of a democratic republic. Because it’s almost too late.