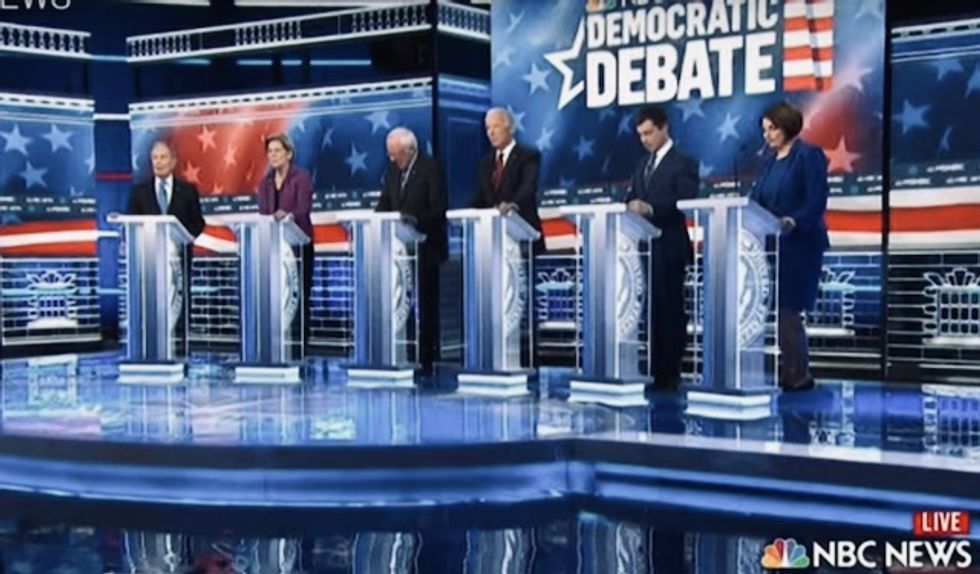 Democratic presidential hopefuls will have a chance to demonstrate their appeal to the wider electorate Saturday in a primary vote in Nevada, where the population – 29% Latino, 10% black and 9% Asian American or Pacific Islander – better reflects the country's demographics than either Iowa or New Hampshire.

Just past the roulette wheel and slot machines, the smoky bars and blinking lights, Nevada Democrats are preparing to weigh in on their party's presidential nomination fight.

Seven casino-resorts on the Las Vegas Strip stand among 200 caucus locations statewide that will host the presidential caucuses on Saturday, the third contest in a 2020 primary season that has so far been marred by chaos and uncertainty in overwhelmingly white, rural states. The exercise of democracy inside urban temples of excess is just one element that distinguishes the first presidential contest in the West, which will, more importantly, test the candidates' strength with black and brown voters for the first time in 2020.

“Nevada represents an opportunity for these candidates to demonstrate their appeal to a larger swath of our country,” said state Attorney General Aaron Ford, a Democrat who is not endorsing a candidate in the crowded field.

Nevada’s population, which aligns more with the U.S. as a whole than the opening elections in Iowa and New Hampshire, is 29% Latino, 10% black and 9% Asian American and Pacific Islander.

The vote comes at a critical moment for the Democratic Party as self-described democratic socialist Bernie Sanders emerges as the clear front-runner and a half dozen more moderate candidates savage one another for the chance to emerge as the preferred alternative to Sanders. The ultimate winner will represent Democrats on the ballot against President Donald Trump in November.

Yet on the eve of the caucuses, questions lingered about Nevada Democrats' ability to report election results quickly as new concerns surfaced about foreign interference in the 2020 contest.

Campaigning in California, Sanders confirmed reports that he had been briefed by U.S. officials about a month ago that Russia was trying to help his campaign as part of Moscow's efforts to interfere in the election.

“It was not clear what role they were going to play,” Sanders said. “We were told that Russia, maybe other countries, are going to get involved in this campaign.”

He added: “Here’s the message to Russia: Stay out of American elections.”

Despite the distraction, Sanders enters Saturday increasingly confident, backed by strong support from Latinos and rank-and-file union workers who have warmed to his fiery calls to transform the nation's economy and political system to help the working class.

The outlook was dire for virtually everyone else.

Long before voting began, there was skepticism about Pete Buttigieg's ability to win over a more diverse set of voters after strong finishes in overwhelmingly white Iowa and New Hampshire. It was the opposite for Joe Biden, who struggled in Iowa and New Hampshire but looked to Nevada's voters of color to prove he still has a viable path to the nomination.

The two women left in the race, Elizabeth Warren and Amy Klobuchar, were fighting for momentum, hoping to benefit from a sudden surge of outside money from newly created super PACs. Billionaire Tom Steyer has invested more than $12 million of his own money on television advertising in Nevada, according to data obtained by The Associated Press, which details the extent to which several candidates have gone all-in ahead of Saturday's contest.

The pro-Warren Persist super PAC, created in recent days, is spending more money in Nevada this week than any other campaign or allied outside group. Persist, which hasn't yet disclosed any donors and cannot legally coordinate with Warren's campaign, has invested $902,000 this week in Nevada television on her behalf, according to spending data obtained by The AP. That's more than Klobuchar's and Biden's campaigns have spent over the entire year.

New York billionaire Mike Bloomberg, who dominated the political conversation this week after a poor debate-stage debut, won't be on the ballot. He's betting everything on a series of delegate-rich states that begin voting next month.

“I think right now predicting who's going to win here in Nevada would be a wild guess," former Senate Majority Leader Harry Reid said in an interview. "And if I were a gambler, which I'm not, I wouldn’t be betting on who's gonna win here in Nevada.”

The political world, meanwhile, hoped there would be a winner at all.

Nevada Democrats have projected confidence in their process, although Democratic National Committee Chairman Tom Perez this week refused to commit to releasing the full results on the day of the vote. He said a number of factors, including early voting and potentially high turnout, could affect the tabulation and timing of results. In addition, Nevada, like Iowa, reports three sets of data from the multistage caucus process.

“We’re going to do our best to release results as soon as possible, but our North Star, again, is accuracy,” Perez told The Associated Press this week.

The state party has added to its responsibilities by offering early voting - something Iowa did not attempt. Nevada voters have been eager to partake, given the alternative is to spend significantly more time voting at a chaotic caucus site.

The party said nearly 75,000 Democrats cast early ballots, and a majority were first-time caucus-goers. In 2016, a total of 84,000 Nevada voters participated in the Democratic caucuses.

A small, but significant number of the ballots cast early were disqualified.

Of the more than 36,000 ballots that were cast through Monday, 1,124 ballots were voided largely because voters forgot to sign them, according to the state party, which did not release the final numbers. Party officials said they were reaching out to these voters and encouraging them to caucus in person on Saturday.

Campaigning in Las Vegas on the eve of the caucuses, Trump sought to raise doubts about the process.

Amid such concerns, Nevada Democrats tried to stay focused on the candidates and the issues they represent.

Reid, who at 80 years old remains one of the most powerful Democrats in the state, predicted that Sanders' signature health care policy, "Medicare for All,: could not win support in Congress. Yet he said he thinks the fiery Vermont senator could bring Democrats together.

“I have no doubt that if Bernie Sanders is the nominee, the party will unite behind him and beat Trump,” Reid said.

Hours after Donald Trump suggested setting aside provisions in the Constitution because he believes the 2020 election was stolen from him, he was back to complaining about his legal problems in a Manhattan courtroom.

Taking to Truth Social, the former president complained that the prosecutors never should have brought a case against the Trump Organization for ducking paying taxes on employee benefits.