'Don't listen to them': Insurance industry front group to run ads attacking Medicare for All during Democratic debate 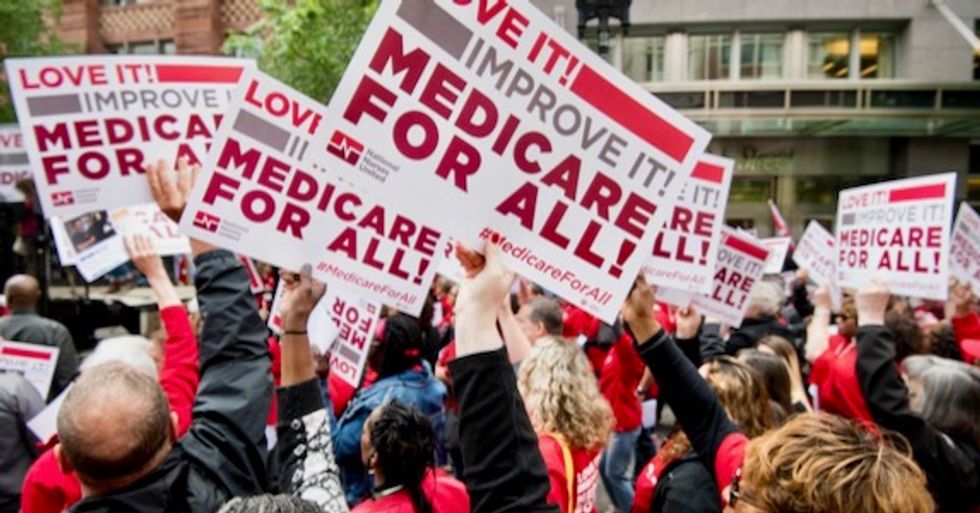 Members of National Nurses United union members wave Medicare for All signs during a rally in front of the Pharmaceutical Research and Manufacturers of America in Washington, D.C. on Monday, April 29, 2019. (Photo: Bill Clark/CQ Roll Call)

"We are winning, so the industry is attacking Medicare for All to protect their profits and help the politicians defending those profits."

The Partnership for America's Health Care Future, an insurance industry front group formed in 2018 to combat Medicare for All, announced Wednesday that it will run television and social media ads against healthcare reform during the Democratic presidential debate in Las Vegas.

PAHCF said in a statement that the 30-second spot will air on MSNBC—a co-host of Wednesday night's debate—as well as Facebook, Twitter, and Snapchat. The group said it is also planning "a takeover of YouTube's homepage."

The ad characterizes Medicare for All and incremental alternatives like the public option as "one-size-fits-all" proposals that would strip people of "choice" and impose tens of trillions of dollars in higher taxes.

The ad cites the conservative Committee for a Responsible Federal Budget on the potential cost of Medicare for All but fails to mention studies showing single-payer would save hundreds of billions of dollars—and tens of thousands of lives—each year.

PAHCF described the ad blitz as "part of a substantial national public education effort." But Jasmine Ruddy, lead Medicare for All organizer with National Nurses United, tweeted that the goal of the campaign is to "spread straight-up lies about Medicare for All."

Michael Lighty, an activist with the Democratic Socialists of America's Medicare for All campaign, told Common Dreams that "there's a lot of irony in the healthcare industry promoting 'access and choice'—two elements they have strip-mined from the U.S. healthcare system, leaving a landscape of denied care, 45,000 deaths, and 140 million Americans suffering financial hardship because of private health insurance."

"We are winning," Lighty said of the movement for single-payer, "so the industry is attacking Medicare for All to protect their profits and help the politicians defending those profits."

Democratic presidential candidate Sen. Bernie Sanders (I-Vt.), the author of the Medicare for All Act of 2019 in the Senate, debuted an ad of his own Wednesday titled "Medicare for All Leaves No One Behind." The ad features Lourdes Esparza, a Las Vegas-based organizer with the Clark County Education Association, the largest independent educators union in the United States.

"My mom was telling me that her medicine in a whole year was $40,000," Esparza says in the spot. "We have to stop thinking that this is normal because it's not."

"Bernie's Medicare for All leaves nobody behind and guarantees healthcare as a right for all of us," Esparza adds. "It's a right and nobody has the right to take that from us. Not Big Pharma, not other people that have other interests. It's my health. I need healthcare."