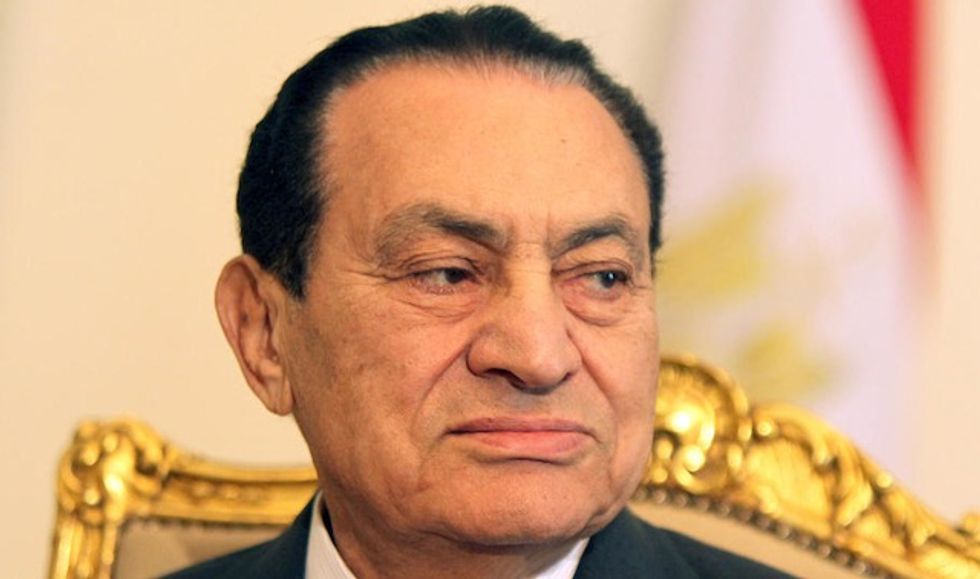 The former Egyptian strongman was under house arrest since he was ousted on February 11, 2011 after three decades in power. Mubarak suffered from health problems following his ouster and arrest, and his medical state was the cause of several often contradictory reports. Earlier this week, his son, Alaa Mubarak tweeted that his son was still in an intensive care unit (ICU) weeks after undergoing surgery.

Until the day he stepped down, Mubarak kept an absolute grip on power with routine security crackdowns and human rights violations against opposition members, particularly the Muslim Brotherhood movement.

The last years of his presidential term were marked by growing opposition to his rule among Egyptians. In 30 years, conditions for Egypt’s working class failed to improve; in 2010, 44 percent of the population lived on less than two dollars a day. Accusations of fraud in the November 2010 legislative further damaged Mubarak’s public image.

By early 2001, Mubarak was unable to withstand 18 days of unprecedented protests in the Arab nation, during which hundreds of thousands of Egyptians took to the streets in the capital, Cairo, calling for his departure. Despite the violent crackdown on the demonstration, the protesters took over Cairo’s Tahrir Square -- which became the centre of the anti-regime movement -- until Mubarak stepped down.

Mubarak had studied to be a fighter pilot and after earning his degree in 1950, he rose through the military ranks until he was named Egypt’s Air Forces commander in 1972. Under his leadership, Egypt’s Air Force contributed significantly to the country’s early victories over Israel during the Kippur War in 1973. Mubarak was promoted to general shortly thereafter.

Mubarak was eyeing a diplomatic post as his next professional step when then president Anwar el Sadat decided otherwise, naming him vice president in 1975. “Mubarak was the ideal right-hand man: disciplined, hardworking, loyal, and without great ambition or charisma,” journalist Hicham Kassem wrote for French daily newspaper Le Monde in 2005. “Former US Secretary of State Henry Kissinger, who met him around that time, thought he had a minor staff job because he was so low-profile.”

For six years, Mubarak accompanied Sadat to meetings with foreign heads of state, both Arab and Western. Often, when Sadat was away, it was Mubarak who presided over cabinet meetings. One week after Sadat was assassinated by radical Islamists in 1981, Mubarak became president. He was 53 years old.

In terms of diplomacy, Mubarak was considered by many to be an accomplished head of state, as he was able to increase Egypt’s presence on the international stage. “One of Mubarak’s fundamental manoeuvres was succeeding in rallying Arab countries to the Americans in 1990 during the first Gulf war,” said Jean-Noel Ferrié, a political scientist and author of a book on Egypt. “It was a masterful move.”

Though Egypt did not recover the status of leader of the Arab world that it enjoyed under Gamal Abdel Nasser (who was president from 1952 to 1970), under Mubarak it nevertheless regained a role as a key player in the region. Most notably, Egypt began playing a crucial role in issues related to the Israeli-Palestinian conflict; Mubarak took on the role of mediator in indirect negotiations between the two sides as of 2005.

But the trust that Arab countries once placed in Mubarak ultimately faded. During Israel’s raid of the Gaza Strip between December 27, 2008, and January 18, 2009, Egypt refused to completely open the Rafah Crossing, which lies along the Egypt-Gaza border. Some 1,400 Palestinians were killed during the operation. “Mubarak continued Sadat’s policies of deferring to the US and Israel,” noted Ferrié. “Today, Egypt no longer has the aura it had before. On the regional stage, it has let Iran and Turkey take its place.”

At the beginning of his term, Mubarak’s domestic policies seemed to be more flexible than those of his predecessor. He notably ordered the release of 1,500 members of the Muslim Brotherhood who had been imprisoned under Sadat. The move backfired when the Islamic organisation, allied with the Wafd opposition party, won four parliamentary seats in 1984. Fearing the emergence of a widespread Islamist movement in Egypt, Mubarak tightened his grip, imposing a repressive crackdown on the Muslim Brotherhood from 1990 to 1997. During this period, 68 Islamists were executed and 15,000 imprisoned.

Over the course of his term, Mubarak’s power was bolstered by an extensive police force and a political system dominated by his own party. The result was an opposition that was all but silenced. Mubarak was the only candidate in the presidential elections of 1987, 1993, and 1999, in which he got more than 95 percent of the votes. In 2005, however, faced with the growing dissatisfaction of the Egyptian people, he ordered the modification of the constitution so that multi-party elections could be held. The overture proved to be a façade -- for the election of that year, Mubarak’s party handpicked the candidates to go up against Mubarak, who, unsurprisingly, came away with 88 percent of the votes.

Mubarak’s authoritarian tendencies ultimately provoked his fall from power. In June 2012, the former Egyptian strongman was judged complicit in fatal acts of violence committed against protesters in Tahrir Square, which resulted in the deaths of around 846 civilians in January and February 2011. He was sentenced to life in prison for failing to prevent the killings. His lawyers appealed the verdict and a higher court later cleared them in 2014.

The acquittal stunned many Egyptians, thousands of whom poured into central Cairo to show their anger against the court. In March 2017, the ailing former military chief and president was released from prison.

Along with sons Alaa and Gamal, Mubarak was placed in temporary detention on April 13. He was also being investigated for corruption charges.