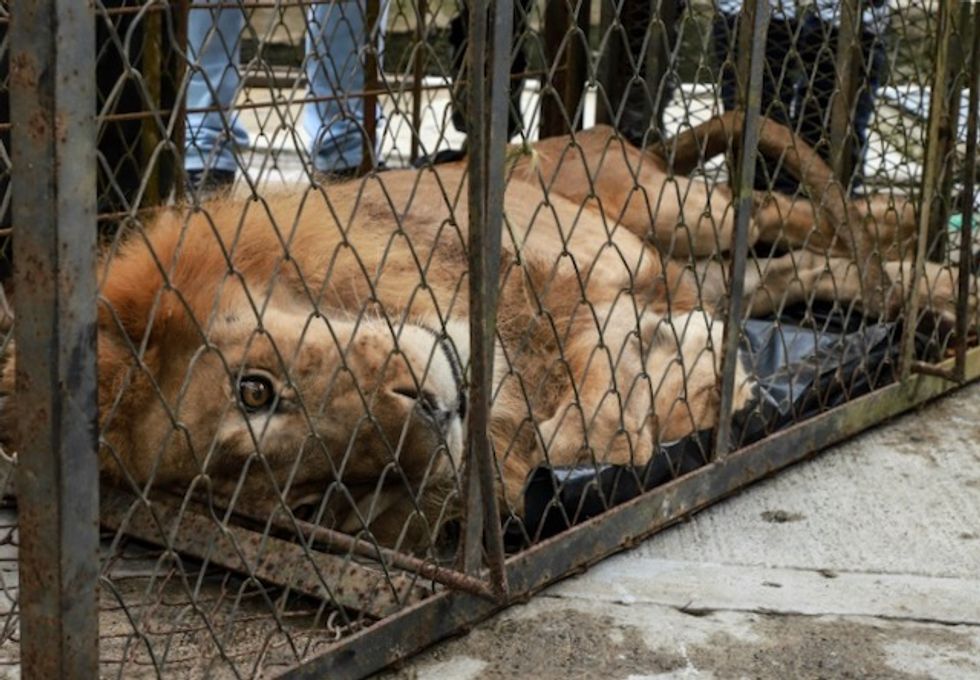 Emaciated with a vacant gaze and without the strength to stand upright, 20-year-old lion Jupiter's life is in danger.

But authorities are acting to try to save him after he was discovered in a "critical state."

Leading attempts to restore Jupiter to full health is the woman who rescued him from the circus where he was born and brought him up as her "son" from the age of three months.

But in April 2019, environmental authorities confiscated Jupiter over a lack of required documentation and accusations that Torres was mistreating hundreds of wild animals, most of which arrived at her sanctuary showing signs of previous mistreatment.

When Jupiter was transferred to the Los Caimanes zoo in the department of Cordoba he weighed 250 kilograms (550 pounds), Torres said. Now his weight is down to just 90 kilos.

When the zoo closed he was taken to a nearby facility.

"Clearly he was locked up and that's when he started losing weight," said Torres, who claimed she had felt a mother's instinct that her progeny needed her help.

"He hasn't eaten for several days. It's a fact that an animal deteriorates" in such conditions, she said.

Dramatic pictures of Jupiter have gone viral on social media where a campaign was launched to help him.

"This animal should never have left, nor been mistreated," said Cali's mayor Jorge Ivan Ospina.

He said local authorities were looking into building "appropriate" accommodation for Jupiter while the attorney general's office and police opened an animal cruelty enquiry.

Animal cruelty can be punished with up to three years in prison and a $12,000 fine.

Crucially, though, this king of the jungle -- who has never set foot in one -- is going home where his former carer is hoping to nurse him back to health.

"This love that he and I have for each other will save him," said Torres.

"That's the connection between a mother and a child."