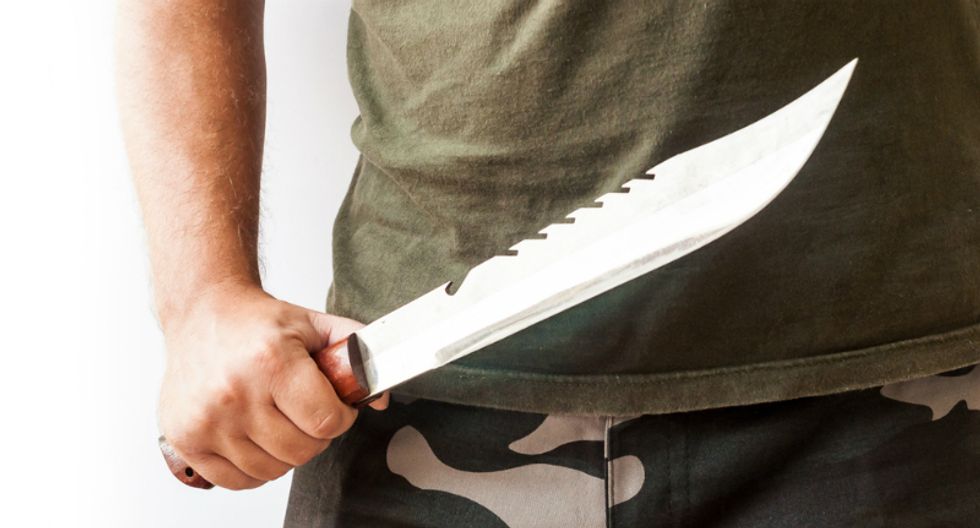 A white man in camouflage pants holds a machete (via Shutterstock).

LAUDERHILL, Fla. — The father accused of slashing his 10-year-old daughter and 17-year-old stepdaughter with a machete will remain in the Broward County Jail without bond on charges that include attempted murder.At his first court appearance Saturday, Dennis Anthony Reid stood stoic and stared blankly to his left as Broward Judge Bernard Bober set bonds of $50,000 on each of the other two counts of aggravated child abuse.Reid was also ordered not to contact the girls, who remain in Broward Health Medical Center in serious condition.While Reid was learning his fate, their mother had visited the...

According to a report from the Guardian, there is a growing belief that Donald Trump's appeal is fading as conservative voters increasingly look for an alternative for 2024 with Gov. Ron DeSantis (R-FL) running a highly effective stealth campaign to be his successor.

As the Guardian's David Smith wrote, the Florida Republican is acting as if the former president doesn't exist as he steals both the spotlight and donors away from Trump.

Ex-White House aide Cassidy Hutchinson revealed during her testimony before the House Select Committee to Investigate the January 6th Attack on the United States Capitol last week that Ornato informed her on the day of the insurrection that an irate Trump had tried to commandeer his presidential vehicle after Secret Service agents refused to drive him to the Capitol.