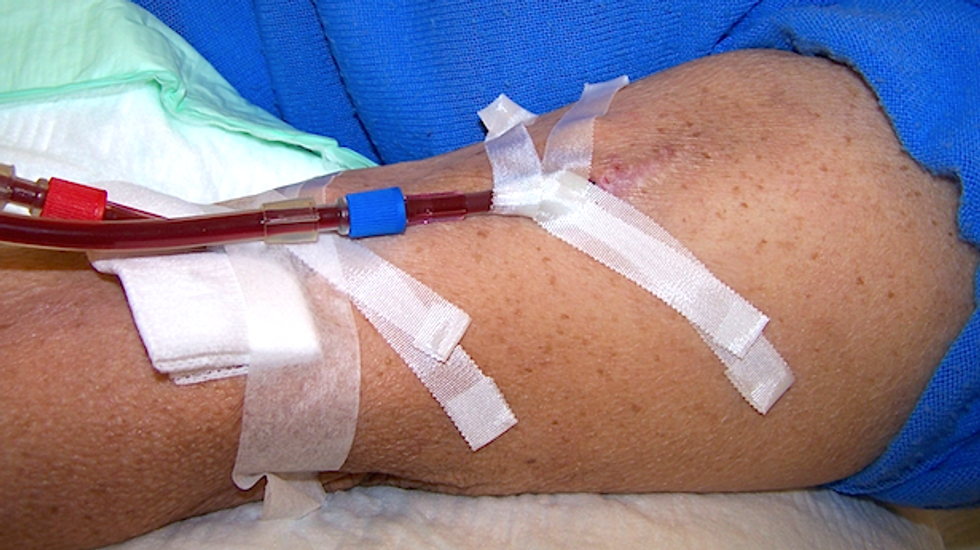 On Thursday, ABC 13 News reported that a man undergoing dialysis for end-stage renal failure in Port St. Lucie, Florida was prohibited from bringing a life-size cardboard cutout to the Fresenius Kidney Care clinic to stand next to his chair while undergoing treatment, which he said he needs for emotional support.

Nelson Gibson said that his family is not allowed to sit with him for the duration of his treatment, which lasts three and a half hours several times a week, so he started bringing a framed picture of himself with the president to feel more comfortable. When no one complained, he upgraded to bringing a full Trump cutout, but this was not allowed. "They told me it was too much and it wasn't a rally."

When he was told he couldn't bring the cutout in, he simply left without treatment, after which his son Eric Gibson called the facility demanding to know what had happened. "It was supposed to be an issue of safety infectious disease, which made no sense," said the younger Gibson.

"While we cannot discuss any specific individual, we strongly support the ability of all our patients to express their views, which includes bringing reasonably sized items into our dialysis centers that do not create safety or infection control issues, or interfere with caregivers on the treatment floor," said Fresenius spokesman Brad Puffer.

Patients are generally allowed to bring emotional support items into dialysis clinics, although it is unclear whether life-sized cutouts that could potentially obstruct aisles are commonly used.