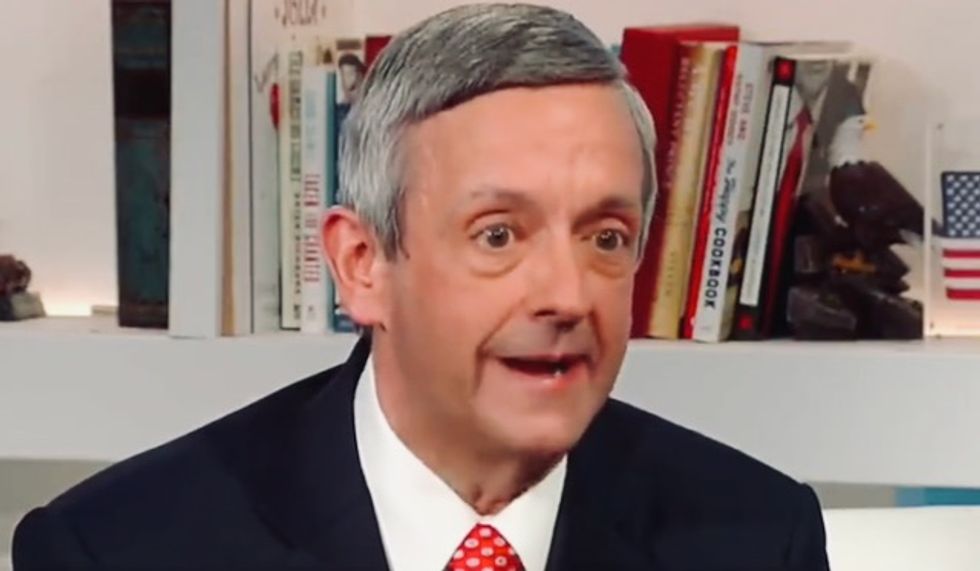 Texas megachurch pastor Robert Jeffress is defending President Donald Trump for ignoring a plea from a conservative Christian speaking directly to the president, to "love your enemies" as Jesus preached. Trump refused to observe the request, made to him Thursday at the National Prayer Breakfast, where instead he attacked and threatened Speaker Nancy Pelosi, sitting mere feet away from him.

"This president absolutely hates phoniness, he can smell it a mile away, and the president thinks there's something inherently phony in saying that you're praying for him while you're working 24/7 to destroy him," Jeffress, a Fox News contributor, said on the right wing cable channel Friday morning (video below).

"By the way, the Bible supports his skepticism," Jeffress claimed, using a passage from Scripture to overrule the Sermon on the Mount.

He also suggested the left hates Trump and is trying to "destroy him" because he speaks "truth" about "the sanctity of life and religious liberty."

Jeffress, who sits on Trump's Evangelical Advisory Board and is a member of the president's White House Faith Initiative, has been a top defender of Trump since the 2016 election. He has stated that Jews, Catholics, Mormons, Muslims, and Hindus are going to hell for worshiping a "false god." He has said President Barack Obama was "paving the way" for the anti-Christ. Jeffress' 2008 sermon, "Gay is Not OK" has been widely criticized.

A Fox News pastor who believes that Jews are destined to burn in hell for eternity recalls the conversation he had… https://t.co/sEfTAoXsu4
— Bobby Lewis (@Bobby Lewis)1581081529.0