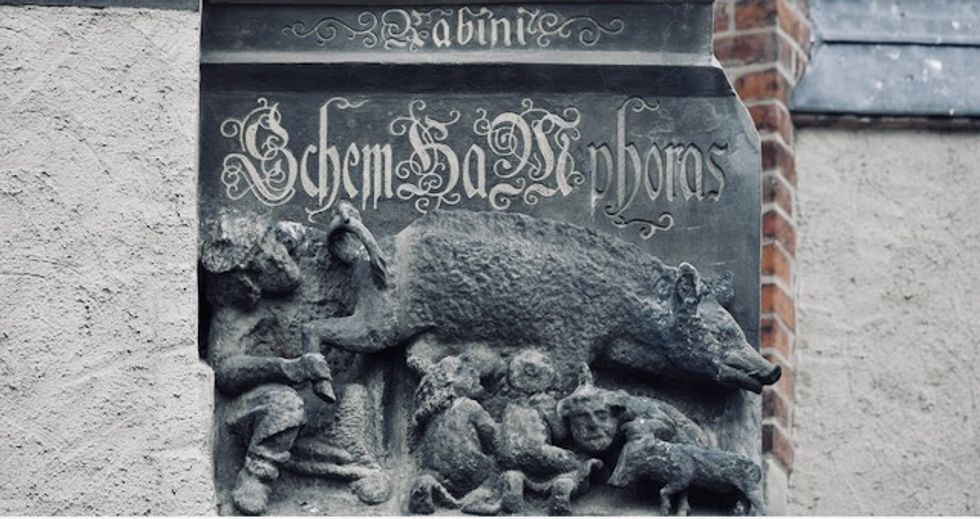 A court in central Germany on Tuesday rejected a case calling for a local church associated with Protestant firebrand Martin Luther to remove an ancient anti-Semitic carving from its wall.

Widely known the as "Judensau" (Jews' sow), the 13th-century bas relief on the church in eastern German town Wittenberg depicts a rabbi peering into a pig's anus, while other figures suckle milk from its teats.

The hateful symbolism is that Jews obtain their sustenance and scripture from an unclean animal.

A panel of judges at Saxony-Anhalt state's superior court in Naumburg found the image "did not harm Jews' reputation" because it was "embedded" in a wider memorial context, presiding judge Volker Buchloh said, according to regional broadcaster MDR.

After failing at a lower court with his claim that the sculpture was insulting to Jews and should be removed, a local Jewish man had appealed the decision.

Announcing Tuesday's ruling, Buchloh said "anyone looking at the relief cannot fail to see the memorial and the information sign the parish put up in 1988," placing it in the proper context.

Johannes Block, the pastor at the Wittenberg Stadtkirche (City Church), told Munich-based daily Sueddeutsche Zeitung on Monday that the image was a "repulsive and tasteless" attack on Jews that "fills me with shame and pain".

"We did not ask for this sculpture, but are trying to handle this difficult inheritance responsibly," he added, saying he was in talks with Germany's Central Jewish Council on how to update the memorial.

Many churches in the Middle Ages had similar "Judensau" carvings, which were also aimed at sending the stark message that Jews were not welcome in their communities.

Another example can be seen at the world-famous Cologne cathedral.

But the importance of the Wittenberg relief is tied to Luther, himself a notorious anti-Semite, who preached there two centuries later.

It was in Wittenberg that Luther is said to have nailed his 95 theses to another church's door in 1517, leading to a split with the Roman Catholic Church and the birth of Protestantism.

The theologian argued that Christians could not buy or earn their way into heaven but only entered by the grace of God, marking a turning point in Christian thinking.

But Luther also came to be linked to Germany's darkest history, as his later sermons and writings were marked by anti-Semitism -- something that the Nazis would later use to justify their brutal persecution of the Jews.

The superior court's decision not to order the relief removed can still be appealed to Germany's highest court, the Federal Court of Justice.