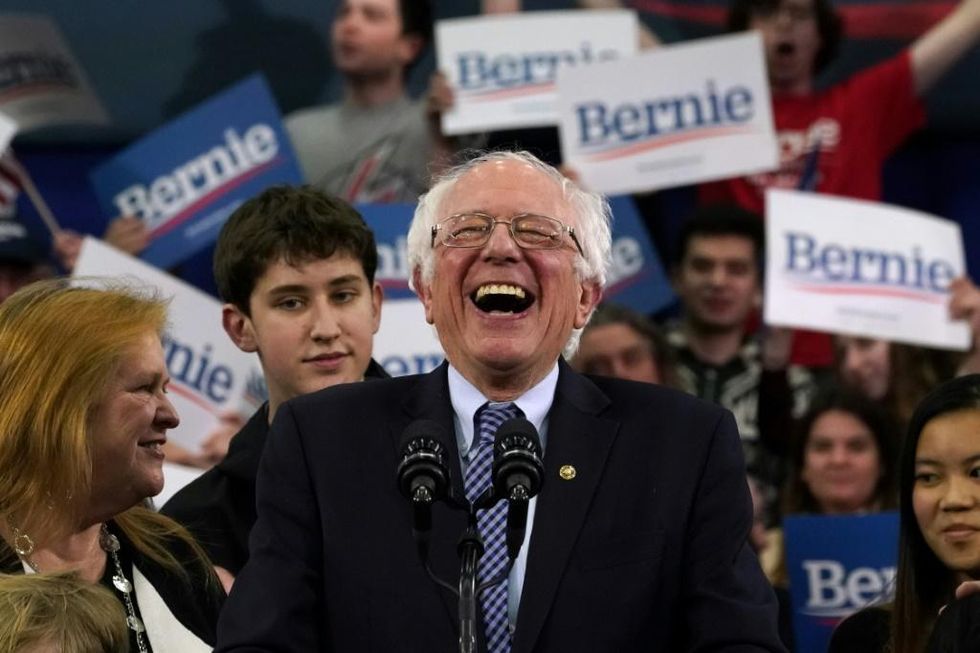 Supporters of Bernie Sanders let loose with an ecstatic roar late Tuesday when the first of US networks called the all-important New Hampshire primary for their leftist icon.

"It feels amazing!" Ayesha Wadhawan, 26, a tutor who volunteered for the Sanders campaign in New Hampshire, gushed as friends hugged each other and slapped high-fives at a Sanders watch party in Manchester.

"It just feels like this is a huge step towards achieving positive change for people in this country."

Deep into Donald Trump's presidency, Wadhawan worried that hatred and division have soared.

The antidote was Sanders's "politics of truth and the politics of love that speaks to the actual problems in people's lives," she said.

Brian Conroy, an artist, said he came to the gathering to be inspired and to celebrate a champion of working class Americans.

In 2016, Sanders, a senator from Vermont with an unruly shock of white hair, swamped Hillary Clinton in New Hampshire's primary and jump started his "political revolution" that came close to scoring a massive upset.

Four long years later, the man many simply call "Bernie" walked out to deafening cheers and pumped his two fists as he declared victory in one of the most crucial early votes on the US presidential calendar.

"It's on to win the Democratic nomination," he boomed. "And together, I have no doubt that we will defeat Donald Trump."

There is reason for joy within Bernie's brigade. Eight days earlier he won the popular vote in Iowa's troubled caucuses, although rival Pete Buttigieg, a 38-year-old former mayor, secured more delegates to the national convention that formally chooses the nominee.

Beaming followers have held up Sanders, 78, as the most electable candidate, with the broadest support across various demographics.

"He's been on the right side of politics for the last 50 years," said Bennett Mosseau, a construction technology expert from Hopkinton.

"All those people worried about electability should get on the Bernie train," the 24-year-old added.

A common thread of every Sanders rally is youth. Crunchy seniors and middle-class, middle-age Americans are present, but Sanders has drawn a disproportionate number of young voters to his cause.

Some students at the event were wearing dreadlocks, or, like Alyssa Maston, purple hair.

"I obviously want somebody who can beat Trump," the 22-year-old from Merrimack said.

One woman wore a t-shirt that read: "Greed kills." A dog was bedecked in a Bernie scarf. Several parents had their teenage children in tow -- or vice versa.

Matthew Gage, an emergency medical technician, said he voted for Sanders Tuesday because of the senator's push for his Medicare For All health plan.

"In his first year if he can just get health care reform and work on the student loan problem, it's worth it," said Gage, 40. "If he gets those two things done, I'm good."

When Sanders declared health care a "human right, not a privilege," Gage and others shouted their approval.

Sanders made a point of stressing that regardless of who the Democratic nominee would eventually be, the party would coalesce around that candidate in order to defeat Trump.

Conroy, the artist, did not agree, reflecting tensions about the direction of the party that marked the 2016 nomination race.

"I won't be voting for anybody but Bernie," Conroy asserted, "because only Bernie can win."