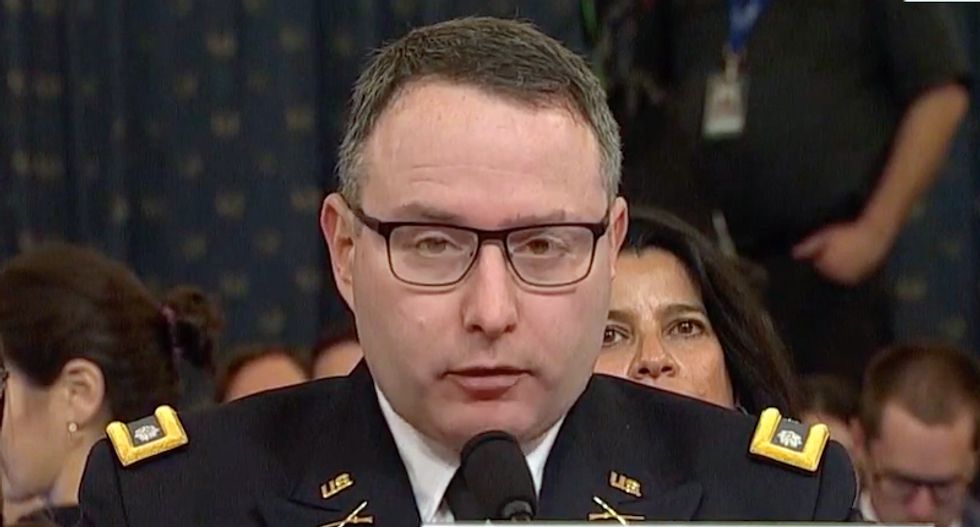 On Monday, Washington Post columnist Michael Gerson penned a scathing indictment of the GOP for turning their backs on Alexander Vindman, the decorated Soviet-born former National Security Council staffer who was forced out for testifying in the impeachment inquiry.

"In the large category of things that justice demands but will never come to pass: The elected Republicans who voted against the impeachment and removal of President Trump owe Army Lt. Col. Alexander Vindman a public apology," wrote Gerson. "The National Security Council staffer, Iraq War veteran and Purple Heart recipient obeyed a lawful subpoena, gave truthful testimony and was rewarded by his commander in chief with unceremonious removal from the White House and vicious criticism designed to destroy his life and career. A pathetic smattering of Trump’s congressional enablers criticized this calumny. But most winced, fidgeted and said nothing. All of them knew that Trump unremoved would be Trump unbound. And that utter predictability makes them personally responsible for all that has followed."

"Cowardice on this scale is not a single act; it includes all the guilty silences that complicity continues to require," continued Gerson. "And the consequences of Republican cravenness are still unfolding."

"When revenge is this obvious, the goal is not merely to punish; it is to intimidate those who might resist Trump’s will in the future," wrote Gerson. "And the strategy, thanks to elected Republicans, is working. The federal government is taking on the attributes of a banana republic — not in a humorous metaphorical sense, but in the sense of real fear of presidential retribution, aided by the cable TV and Internet mob, for public resistance to his power. In the past, such attacks have often seemed the result of impulse. Now they have become systematic. And Trump is not only targeting his enemies; he is intervening in the legal system on behalf of those who implement his will. The president has consistently surrounded himself with con men, grifters and enforcers. His intervention in the Stone case — perhaps previewing the broader abuse of his pardon power — holds out the promise of impunity for his supporters."

"Accusing the president of authoritarian tactics once seemed exaggerated. Now it is a fair description of the day’s news," wrote Gerson. "A pattern of presidential misbehavior has become a crisis in the rule of law. Those who ignore Trump’s actions may think they are staying in the shadows, but they are actually in the hot spotlight of history. Every Republican who has lectured others on their insufficient respect for the Constitution now has the chance to defend the constitutional order from the despotic populism the founders most feared. But nearly all of them have failed. When the moment of testing came, they were absent without leave."

"It is, for me, a sad and rude awakening," concluded Gerson. "I have known Republican members of the House and Senate over three decades and never, on the whole, doubted their commitment to America’s founding ideals. That commitment may remain. But there is precious little public evidence of its existence. A nation in need of Republican leaders has found flunkies instead."