GOP’s Jim Jordan exasperated after Trump’s FBI director responds to his rant with ‘do you have a question?’ 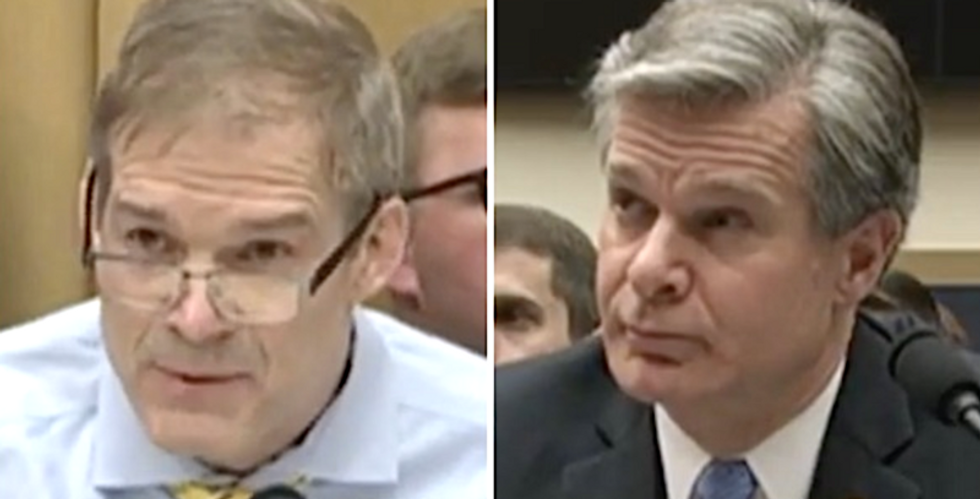 During a hearing in front of the House Judiciary Committee this Wednesday, FBI Director Christopher Wray took questions from Rep. Jim Jordan (R-OH) regarding the Inspector General's report that found the opening of the Mueller probe into Trump's 2016 campaign was not politically motivated — a direct contradiction of Trump's claim that it was a "witch hunt." While the report found the probe did not have a political agenda, it nevertheless criticized ethical flubs committed by the FBI during the course of the probe.

Jordan cited Wray's response letter to the report, where he agreed with its assessment and promised to take its criticism to heart. Jordan went on to reiterate his belief that the FBI "spied" on the Trump campaign and misled the FISA court, among other pro-Trump takes on the Mueller investigation. "And when all that's pointed out to you in a 400-page report, you say, 'Thanks for the constructive criticism,'" Jordan said, staring directly at Wray. "A 400-page report that said there were 51 assertions that the top people at the FBI made to the court that weren't backed up, that weren't supported at all, and it's called 'constructive criticism'?"

Jordan continued to lecture Wray for at least another two minutes. When his rant came to end, Wray stared at him in silence for a few seconds, ultimately asking, "I'm sorry, is there a question?"

"There is," Jordan responded.

"What's the question," Wray asked with a slight smirk.