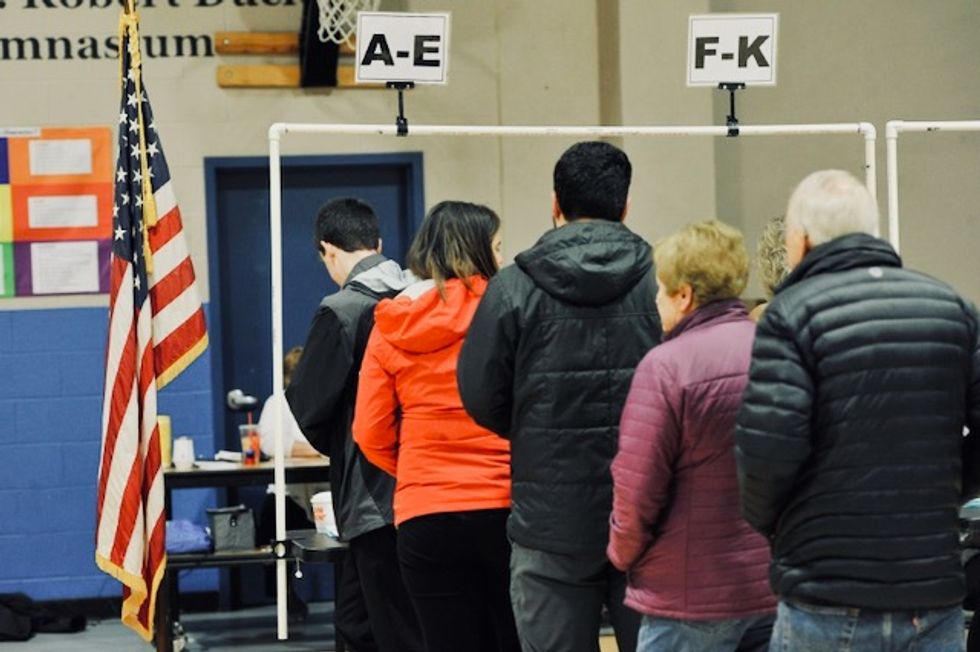 Voters in Manchester, New Hampshire on February 11, 2020 -- home to just 1.3 million people the state is a battleground that plays a hugely influential role in the American political landscape AFP / Joseph Prezioso

White House hopefuls have been courting votes in the rolling farm country, lakeside towns and mountain hamlets of the northeastern Granite State, seeking to ignite precious momentum in the Democratic nomination race.

After months atop the pack, Joe Biden has conceded he expects to do badly in New Hampshire, as he did in Iowa -- and the former vice president raised eyebrows by canceling a primary-night party to head straight on to his stronghold of South Carolina.

AFP / Joseph Prezioso Bernie Sanders is a big favorite in New Hampshire, whose Democratic primary he won by a landslide four years ago

"I'm not giving up on New Hampshire," insisted the 77-year-old -- who is sliding in the polls and hopes to right the ship later this month in Nevada and South Carolina thanks to strong support among their racially-diverse population.

New Hampshire is home to just 1.3 million people but it is a battleground whose primary plays a hugely influential role in the American political landscape.

The 78-year-old Sanders is the strong favorite as a senator from neighboring Vermont; four years ago he won New Hampshire by a landslide. He is tailed by 38-year-old moderate Buttigieg, whose win in Iowa's messy caucuses has boosted his presidential bid.

AFP / Joseph Prezioso After months atop the Democratic pack, Joe Biden has conceded he expects to do badly in New Hampshire as he did in Iowa

A light snow fell at a Boys and Girls Club in the state capital Concord, as people showed a voter ID, received a paper ballot and went to one of 33 voting booths curtained by red, white and blue plastic or to table top voting spots.

Mike Schowalter, a 39-year-old lawyer who says he normally supports small government and open markets, said this time he voted for Sanders, a self-declared democratic socialist who critics complain is proposing a health care overhaul and other sweeping ideas that are just too expensive.

"It does seem kind of strange, but I do think a lot of stuff going on in our country right now is a bit broken," Schowalter told AFP. "I think he'll get us talking."

As New Hampshire undergoes its quadrennial close-up, an anxious Democratic Party is searching for the best way to beat Trump as it narrows the field of 11 current candidates.

The RealClearPolitics polling average shows Sanders -- who espouses a "political revolution" -- at 28.7 percent in New Hampshire, with Buttigieg, the former mayor of South Bend, Indiana next on 21.3 percent.

A late surge in New Hampshire has also lifted the fortunes of Amy Klobuchar, with two new polls showing the senator from Minnesota jumping past both Biden and Elizabeth Warren, the main progressive in the race alongside Sanders.

"New Hampshire, the choice you make today will shape our nation's future," Buttigieg tweeted as polling began on Tuesday, depicting himself as a fresh new force that can lead a drive to beat Trump.

AFP / TIMOTHY A. CLARY Pete Buttigieg -- pictured at a rally in Nashua, New Hampshire on the eve of the state primary -- told voters their choice could "shape our nation's future"

"Together we will build the coalition we need to defeat Trump in November."

Sanders put out a similar message about how much is at stake. "Today's New Hampshire primary is incredibly important," he tweeted.

Complicating Tuesday's vote, independents -- who outnumber both Democrats and Republicans in the state -- can vote in either primary, potentially tipping the scales in a tight race.

Buoyed by a strong Iowa showing, Sanders has emerged as the national Democratic frontrunner with 25 support, according to a new Quinnipiac University poll which described it as a "dramatic shift."

Conversely, Biden has skidded from 26 to 17 percent support since the end of January.

AFP / US Democratic primaries and caucuses

Competing for the moderate vote, Bloomberg is focusing on March 3's Super Tuesday, when 14 states vote -- spending a record $260 million of his personal fortune on his campaign, to Sanders' fury who accuses him of trying to "buy the election."