How Democrats clean up the messes left by Republicans 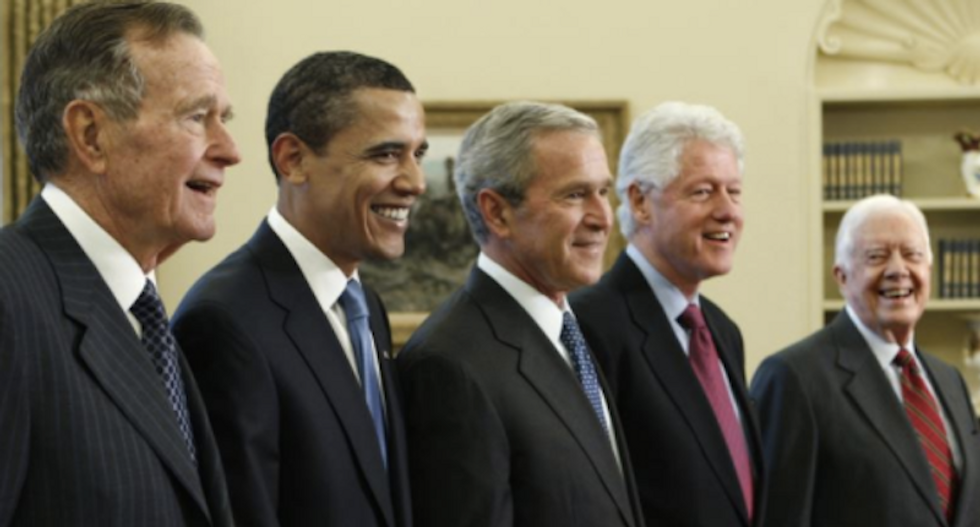 George H.W. Bush, Barack Obama, George W. Bush, Bill Clinton and Jimmy Carter (Voice of America)
For decades, Democratic administrations have been cleaning up economic messes left to them by Republican administrations. Thanks to Donald Trump, they'll have to do so again.

Before diving in, we need to understand this one concept: the debt-to-GDP ratio.

The national debt is a meaningless number on its own. It's meaningful only as a percentage of the total economy, the GDP. Even if the debt grows, that's okay so long as the economy grows even faster. But if the reverse is true — if the economy is growing more slowly than the debt — we're in trouble.

With this in mind, let's go back to the 1980s. When Ronald Reagan took office, the national debt equaled just a little over 30 percent of the total economy. Then Reagan began cutting taxes and spending a huge amount on the military. By the time he left the White House, the debt-to-GDP ratio was nearly 50 percent. He viewed it as a way of "starving the beast" so future Democratic administrations would find it harder to fund programs for the poor and average working people.

So by the time Bill Clinton took office, he had to spend his first term cleaning up the mess, finally balancing the budget and even leaving America with a budget surplus — and getting the national debt-to-GDP ratio back down to 54 percent. (I know. I was there.)

Then Clinton's Republican successor, George W. Bush, went back to the Reagan playbook. W passed massive tax cuts that gave the top 1 percent of households an average of over $570,000 each during the next 8 years. He also launched expensive wars in Iraq and Afghanistan.

Altogether, George W. Bush added a whopping $5 trillion to the national debt, leaving Barack Obama with a debt-to-GDP ratio of 73 percent — as well as a financial sector in the process of melting down, threatening the entire economy. Talk about an economic mess.

Obama had to bail out Wall Street and stimulate the economy in order to get us out of the deepest recession since the Great Depression. In other words, the GDP shrank. These two factors pushed the debt-to-GDP ratio to 100 percent by the end of Obama's first term. By the time Obama handed off the economy to Trump, the economy was growing again, and the ratio of debt to GDP had stabilized at around 103 percent.

But now Trump and Senate Republicans are repeating history. In 2016, when Trump was asked about the debt, he claimed "We pay it back so easily." Then he blew up the debt by passing a giant tax cut for corporations and the wealthy.

So even though Trump inherited the longest economic expansion in history, he increased the ratio of debt to GDP to over 105 percent. And Republicans have reverted to the same, old playbook – threatening to cut Social Security, Medicaid, and Medicare because, they say, "we can't afford" these programs.

Time and again, Republicans scream about the national debt when a Democrat is in the White House, cleaning up the mess they caused. But when there's a Republican administration, they couldn't care less about the debt. When Mitch McConnell was asked about soaring debt and deficits his response was, "It's disappointing, but it's not a Republican problem."

So the next Democratic administration will have to deal with it.

In addition to solving the climate crisis that's become worse under Trump, passing universal health care that's become more urgent under Trump, and tackling myriad other problems that have grown larger under Trump, Democrats will once again have to clean up the economic mess left by their Republican predecessor in order to preserve and expand programs that help average Americans survive.

Republicans accuse Democrats of being fiscally irresponsible. But time and again, it's the Republicans who have created economic messes that Democrats have to clean up.