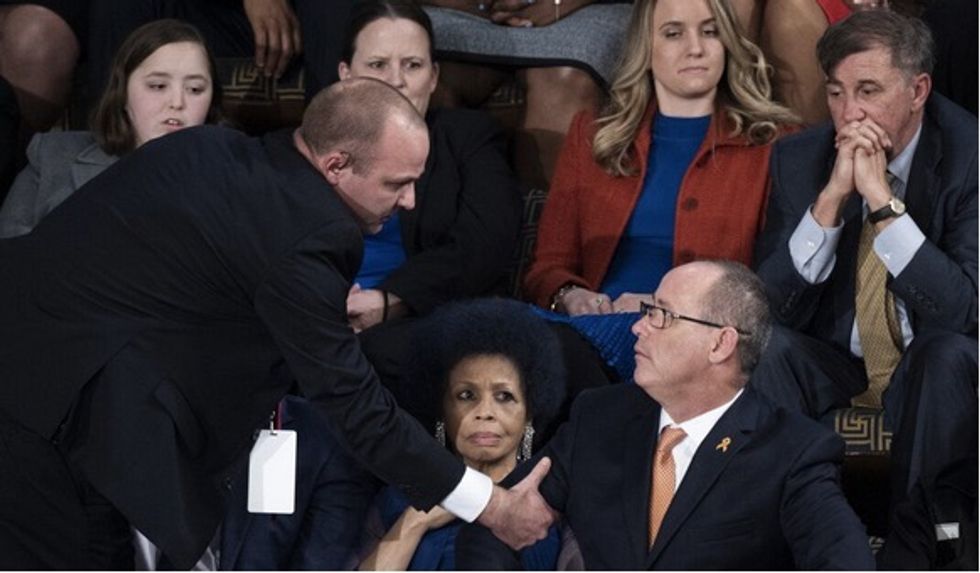 "We've been listening to the NRA lies from Trump and his NRA allies in Congress for too many years... You represent all of us who want to shout at Trump and his enablers."

Gun control advocates on Wednesday emphasized their support for Fred Guttenberg, whose daughter Jaime was killed in the Parkland, Florida, school shooting two years ago, after he yelled in protest at President Donald Trump during the State of the Union address Tuesday night.

After being removed from the House Chamber and subsequently released by security officials without being charged, Guttenberg tweeted that he yelled because he wanted to "be able to deal with the reality of gun violence and not have to listen to the lies about the [Second Amendment] as happened tonight."

Thousands of other supporters on Twitter used the hashtag #ImWithFred to thank Guttenberg for protesting and for his work advocating for stricter gun control measures, including testifying before lawmakers across the U.S. in favor of reforms like Extreme Risk Protection Order laws, also known as red flag laws.

"Thank you to Fred Guttenberg for representing all of us who are so frustrated and angry that Trump protects the NRA and not our children and loved ones from gun violence," tweeted Newtown Action, the grassroots group that formed after the Sandy Hook School shooting in Connecticut in 2012.

Guttenberg yelled, "What about my daughter!" at the president as Trump claimed in his address that the Second Amendment "is under siege all across our country."

A number of Democratic lawmakers turned to Guttenberg and applauded him as he was led out by a security guard.

According to Will Goodwin of Vote Vets, who was sitting near Guttenberg in the chamber, Guttenberg had "leaned over and said, 'I'm about to get kicked out but I can't stand this'" just before his protest.

Some gun control advocates have in recent years called for a repeal of the Second Amendment. Advocates for repealing the amendment cite the fact that deaths from gun violence have risen in recent years and that mass shootings like those in Parkland and Newtown have grown more frequent and deadlier, with many attackers using semi-automatic military-style firearms.

However, laws proposed in state legislatures and in the Democratic-led House mainly center on mandating background checks for gun purchasers, red flag laws, and other broadly popular reforms which would keep the Second Amendment fully intact.

"We've been listening to the NRA lies from Trump and his NRA allies in Congress for too many years," Newtown Action told Guttenberg on social media. "They willingly block gun laws that will save lives and they have zero empathy for gun violence survivors. You represent all of us who want to shout at Trump and his enablers."

By Wednesday morning, the #ImWithFred hashtag had garnered more than 70,000 tweets.

Grateful to call you an ally. You stood by CA when we fought for the toughest gun safety laws in the nation—and won… https://t.co/ByYfDHvRBF
— Gavin Newsom (@Gavin Newsom)1580913910.0

The double standard of allowing those in the chamber to shout in favor of our lawless leader while a father shouts… https://t.co/WyNbAGP4Qu
— Ryan Deitsch (@Ryan Deitsch)1580913908.0

Newtown Action urged supporters to follow Guttenberg's example and "honor with action" victims and survivors of gun violence by voting Trump out of office in November.

America must stand with @fred_guttenberg by voting @realDonaldTrump out of the @WhiteHouse to #EndGunViolence. Fred… https://t.co/NieE4amQ69
— Newtown Action (@Newtown Action)1580909291.0

"Fred's beautiful daughter Jaime was killed on Trump's watch yet Trump refuses to honor with action because the NRA owns him," tweeted the group.