In extradition bid, US accuses Assange of endangering sources 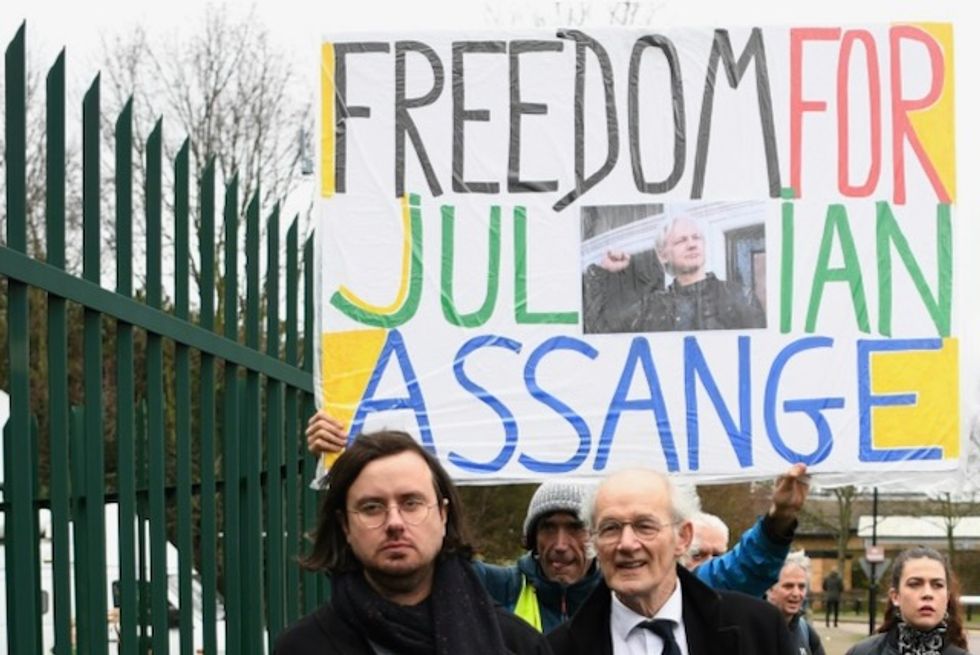 John Shipton (R), father of WikiLeaks founder Julian Assange, and Gabriel Shipton (L), Assange's brother, arrive at Woolwich Crown Court in southeast London for the opening of the full hearing into the US request for Assange's extradition. AFP / DANIEL LEAL-OLIVAS

A lawyer for the United States on Monday accused WikiLeaks founder Julian Assange of risking the lives of intelligence sources by publishing classified US government documents, as his extradition hearing opened in a London court.

Assange faces charges under the US Espionage Act for the 2010 release by his whistleblowing website of a trove of files detailing the realities of US military campaigns in Afghanistan and Iraq.

Assange spent much of the past decade holed up in Ecuador's London embassy to avoid separate legal proceedings in Sweden, but Washington is now seeking his transfer from Britain to stand trial.

Making the US government case on the first day of the extradition hearing in London, lawyer James Lewis denied the prosecution was motivated by embarrassment over the WikiLeaks release.

"It is solely where risk of harm is caused," he told Woolwich Crown Court as Assange, who is being held in the high security Belmarsh prison next door, listened attentively in the dock.

"The United States is aware of sources whose unredacted names and /or other identifying information was contained in classified documents published by Wikileaks who subsequently disappeared."

WikiLeaks initially worked with a string of high-profile newspapers to publish details from the leaked State Department and Pentagon files, which caused a sensation -- and outrage in Washington.

One video from 2007 showed an Apache helicopter attack in which US soldiers gunned down two Reuters reporters and nine Iraqi civilians in broad daylight in Baghdad.

But after falling out with their editors, WikiLeaks released hundreds of thousands of documents in their original form -- including the secret identities of diplomats and local sources.

AFP / DANIEL LEAL-OLIVAS Nina from Amsterdam, a supporter of WikiLeaks founder Julian Assange, joins pro-Assange protest outside Woolwich Crown Court in southeast London for the opening of the full hearing into a US request for Assange's extradition.

Assange and his supporters claim the prosecution is politically motivated, and the case has alarmed free speech advocates.

The Australian's lawyer, Edward Fitzgerald, told the court that the details in the US indictment were "misleading" and insisted his client was undertaking "journalist activities".

"We do not accept that this constitutes an extradition crime," he said.

The Committee to Protect Journalists has previously warned that "for the sake of press freedom, Julian Assange must be defended".

But Lewis, for the US government, told the court, "Julian Assange is no journalist.

"It is inconceivable that any member of the press would disclose any of the names of their sources."

Assange, 48, could be jailed for 175 years if convicted on all 17 Espionage Act charges and one count of computer hacking he faces.

It is the most serious phase of a long-running legal saga that has seen him detained in some form for most of the last decade.

In 2010, Assange was accused of sexual assault and rape in Sweden and after a legal battle, was ordered by a British judge to be extradited there.

He always denied the Swedish allegations and the investigation has since been dropped.

To avoid extradition, he claimed asylum in Ecuador's London embassy, where he spent seven years until Quito gave him up last year following a change in government.

He has since served a jail term for breaching his UK police bail but remains in Belmarsh prison awaiting the US extradition case.

Some US legal experts think Assange has a case.

"Use of the Espionage Act has a very checkered history in the century since Congress passed it," University of Richmond law professor Carl Tobias told AFP.

Many think "extradition and US prosecution would have a chilling effect on press efforts to expose government information that is important to the public interest."

Assange's father John Shipton, who attended the hearing with Assange's brother Gabriel Shipton, decried the "ceaseless malice" of the authorities against his son.

"We're all here to vigorously and firmly support Julian in this 10-year long oppression and political action," he told reporters.

"In August 2017, Donald Trump's administration tried to pressure Julian Assange into saying things that would be favourable to President Trump himself," defence coordinator Baltasar Garzon said.

"When Julian Assange refused, he was charged and an extradition request was issued alongside an international arrest warrant."

The White House called the allegation "another never-ending hoax and total lie" but a judge agreed to add it to the case file.

Former President Donald Trump is facing deep criticism for his latest remarks suggesting voter fraud might now be an issue in Pennsylvania.

On Wednesday, May 18, Trump took to Truth Social with a brief statement amid the reporting of midterm elections results in Pennsylvania, a state he has been fiercely focused on while endorsing MAGA-inspired candidates that align with his political interests.