Iran taunts US on anniversary of shah's ouster 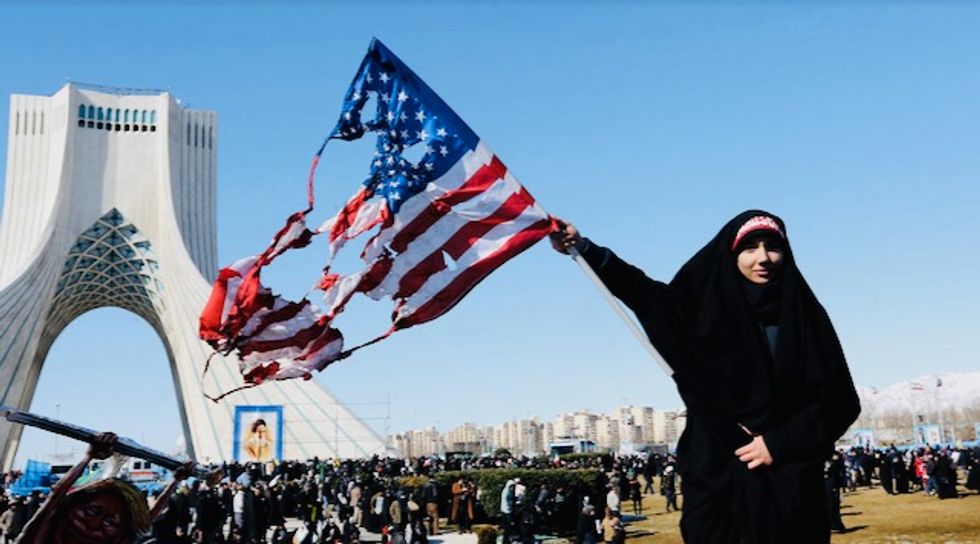 Iran taunted the United States on the 41st anniversary Tuesday of the ouster of its ally the shah, as huge crowds took to the streets to mark the historic occasion.

"It is unbearable for the United States to accept the victory of a great nation and that a superpower has been driven out of this land," President Hassan Rouhani told the gathering.

"It is natural for them to have dreamt, for 41 years, of returning to this land, because they know that we are one of the most powerful countries" in the Middle East, he added.

Tehran and Washington have been sworn enemies since 1979, when the government of the US-backed shah was ousted and the Islamic republic established.

Shah Mohammad Reza Pahlavi had already fled the country weeks earlier after months of protests against his regime.

That November radical students demanding the shah's extradition seized 52 hostages at the US embassy in Tehran and held them for 444 days, prompting Washington to sever ties.

The bad blood between Tehran and Washington worsened in 2018 when US President Donald Trump unilaterally withdrew from a deal that froze Iran's nuclear programme and reimposed crippling sanctions.

In the capital, the atmosphere was mixed, with some people casually strolling the streets with their children clutching balloons and others chanting hardline slogans and trampling on US and Israeli flags.

"Death to America" and "We will resist until the end", read some of the banners they carried.

Young men posed for selfies in front of a row of coffins draped in US flags and bearing the logos of companies seen as symbols of American imperialism.

Girls marched with backpacks bearing Soleimani's face as patriotic songs and Koranic verses were played on loudspeakers and volunteers dished out bowls of soup to keep people warm.

"I'm here to support the authority of the Islamic republic," one participant, Yasser Mohammadi, 37, told AFP.

"Maybe we have some problems internally, like the economy and mismanagement, but this won't stop us supporting our Islamic republic.

"We want to show the world that what the US is doing is wrong, including the killing of Soleimani."

State television showed crowds on the streets of the northern cities of Rasht and Tabriz, dressed in woolly scarves and hats and holding umbrellas, seemingly undeterred by heavy snowfall.

The state had appealed for a large turnout as a show of solidarity after a year in which Iran has been shaken by protests and military tensions with the United States.

"Securing our country and our region depends on our unity, and participation in this rally is a symbol of this unity," said Hadi Khamenei, brother of the supreme leader.

Iran's economy has been battered since May 2018, when Trump abandoned the multilateral nuclear deal and reimposed sanctions.

When Iran raised petrol prices in November, nationwide protests erupted and turned violent before security forces put them down amid a near-total internet blackout.

Tensions with Washington escalated in early January when the US killed Soleimani, head of the Islamic Revolutionary Guard Corps' foreign operations arm, the Quds Force.

Iran retaliated by targeting US forces but then accidentally shot down a Ukrainian airliner, killing all 176 people on board, in a tragedy that sparked anger at home and abroad.

This year's anniversary comes ahead of crucial parliamentary elections in Iran.

The alliance of moderates and reformers that propelled Rouhani to power in 2013 is scrambling to avoid losing its majority in the February 21 election.

Rouhani's government has come under intense pressure from conservatives for agreeing the 2015 nuclear deal that has unravelled since Trump's withdrawal.

"In the past two years, America has put so much pressure on our beloved people, on all of our trade, all of our exports, all of our imports, and all of the country's needs, to exhaust the patience of our people," Rouhani told Tuesday's rally.

But "the Americans did not understand the greatness of the Iranian people," he said.

"The United States believes it is facing 41 years of civilisation. No, the Americans are facing thousands of years of Iranian civilisation."