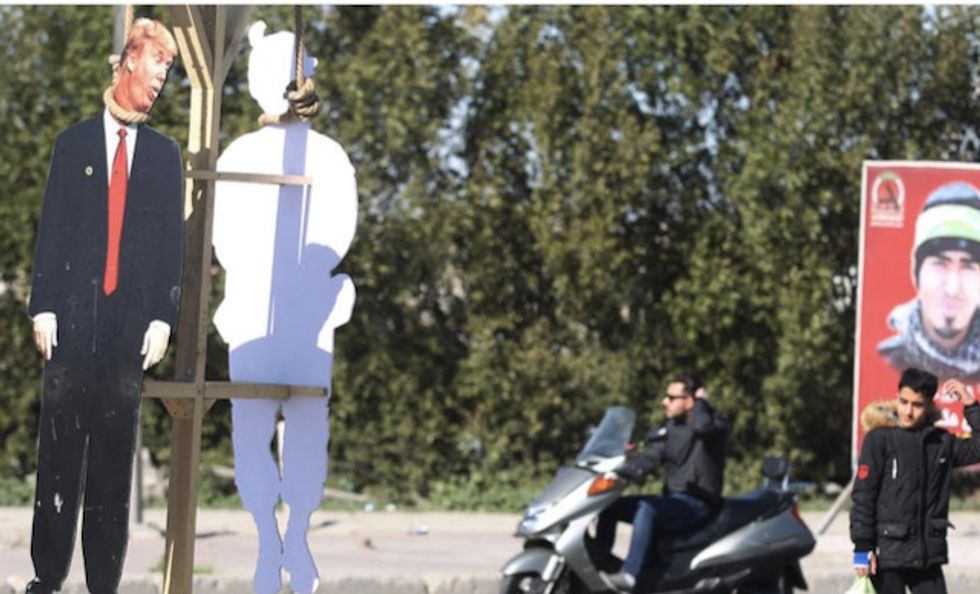 A hardline Iraqi faction hanged effigies of US President Donald Trump in Baghdad Monday, ahead of a memorial for their commander killed in a US strike.

On Tuesday, the Iraqi capital will commemorate 40 days since Abu Mahdi al-Muhandis, deputy head of Iraq's powerful Hashed al-Shaabi military network, was killed alongside top Iranian general Qasem Soleimani in a US drone strike in Baghdad.

An official memorial service will be held in the morning in Baghdad's high-security Green Zone, followed by a public commemoration.

In preparation, Kataeb Hezbollah -- a hardline Hashed faction that Muhandis founded -- erected mock gallows at the entrances to the massive eastern district of Sadr City.

Hanged in nooses were cut-outs of Trump with his tongue protruding and soldiers in US uniforms.

Enormous portraits of Muhandis and Soleimani were also erected elsewhere in the city.

"Our people hung the gallows in preparation for the 40-day memorial service," said an official from Kataeb Hezbollah, who declined to give his name.

Washington carried out a drone strike outside Baghdad International Airport in the early hours of January 3, hitting the two-car convoy in which Soleimani and Muhandis were travelling.

Trump authorised the strike against Soleimani but had not specifically targeted Muhandis, US officials said.

The Iraqi commander was picking up his longtime friend and mentor Soleimani, Iran's pointman on Iraqi affairs, who had just landed.

The strike took place just days after supporters of Kataeb Hezbollah besieged the US embassy in the Green Zone in a rare breach of security for the enclave.

The US embassy in Baghdad issued an alert to its citizens on Monday not to approach the facility due to the risk of more demonstrations or rallies.

Following the US killing of Soleimani, Iran launched volleys of ballistic missiles on a western Iraqi base where US forces are stationed.

Some 5,200 American troops are still based in Iraq, leading the international coalition fighting jihadist remnants.

The US strike so outraged Iraq's parliament that it swiftly voted to oust all foreign forces, a longstanding demand of the Hashed and its political arm, Fatah.

But there has not been a clear military response from the Hashed.

"Kataeb Hezbollah reserves the right to respond to the occupation and to force it out," said the group's spokesman Mohammad Mohye, adding that parliament's vote must be implemented.

Top Hashed commander Qais al-Khazali, who is blacklisted by the US, said: "We've agreed to postpone the military response and give the political route a chance."