It's not just Russia: The US intelligence community is also intervening in the 2020 election 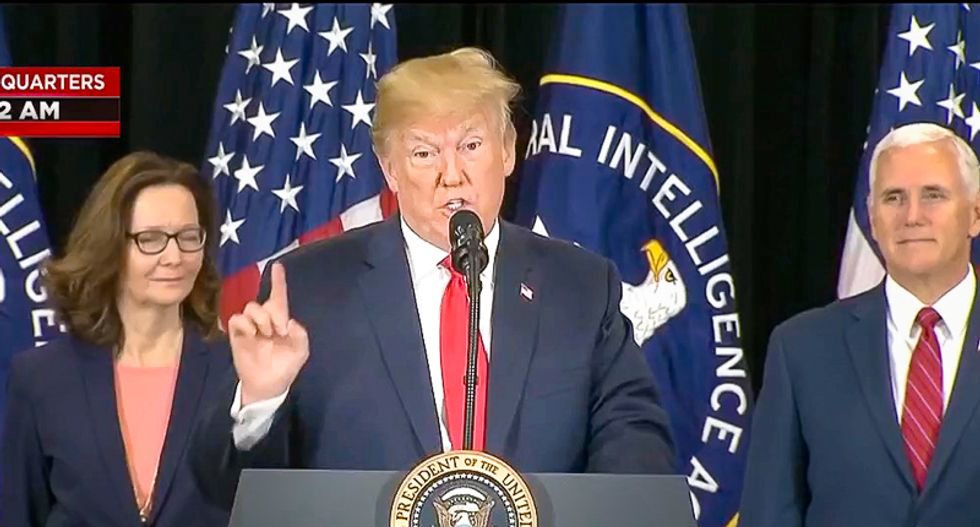 President Trump’s ongoing purge of the intelligence community, along with Bernie Sanders’ surge in the Democratic presidential race, has triggered an unprecedented intervention of U.S. intelligence agencies in the U.S. presidential election on factually dubious grounds.

Former CIA director John Brennan sees a “full-blown national security crisis” in President Trump’s latest moves against the intelligence community. Brennan charges, “Trump is abetting a Russian covert operation to keep him in office for Moscow’s interests, not America’s.” But congressional representatives, both Democratic and Republican, who heard a briefing by the intelligence community about the 2020 election earlier this month say the case for Russian interference is “overstated.”

On February 21, it was leaked to the Washington Post that “U.S. officials,” meaning members of the intelligence community, had confidentially briefed Sanders about alleged Russian efforts to help his 2020 presidential campaign.

Special prosecutor Robert Mueller documented how the Russians intervened on Trump’s behalf in 2016, while finding no evidence of criminal conspiracy. Mueller did not investigate the Russians’ efforts on behalf of Sanders, but the Computational Propaganda Research Project at Oxford University did. In a study of social media generated by the Russia-based Internet Research Agency (IRA), the Oxford analysts found that the IRA initially generated propaganda designed to boost all rivals to Hillary Clinton in 2015. As Trump advanced, they focused almost entirely on motivating Trump supporters and demobilizing black voters. In short, the Russians helped Trump hundreds of thousand times more than they boosted Sanders.

The leak to the Post, on the eve of the Nevada caucuses, gave the opposite impression: that help for Trump and Sanders was somehow comparable. The insinuation could only have been politically motivated.

What’s driving the U.S. intelligence community intervention in presidential politics is not just fear of Trump, but fear of losing control of the presidency. From 1947 to 2017, the CIA and other secret agencies sometimes clashed with presidents, especially Presidents Kennedy, Nixon and Carter. But since the end of the Cold War, under Presidents Clinton, Bush and Obama, the secret agencies had no such problem.

Under Trump, the intelligence community has seen a vast loss of influence. Trump is contemptuous of the CIA’s daily briefing. As demonstrated by his pressure campaign on Ukraine, his foreign policies are mostly transactional. Trump is not guided by the policy process or even any consistent doctrine, other than advancing his political and business interests. He’s not someone who is interested in doing business with the intelligence community.

The intelligence community fears the rise of Sanders for a different reason. The socialist senator rejects the national security ideology that guided the intelligence community in the Cold War and the war on terror. Sanders’ position is increasingly attractive, especially to young voters, and thus increasingly threatening to the former spy chiefs who yearn for a return to the pre-Trump status quo. A Sanders presidency, like a second term for Trump, would thwart that dream. Sanders is not interested in national security business as usual either.

Former House Intelligence Committee chair Jane Harman says Trump’s ongoing purge of the Office of the Director of National Intelligence is a threat to those who “speak truth to power.” As the pseudonymous former CIA officer “Alex Finley” tweeted Monday, the “‘Deep state’ is actually the group that wants to defend rule of law (and thus gets in the way of those screaming ‘DEEP STATE’ and corrupting for their own gain).”

Self-image, however, is not the same as reality. When it comes to Trump’s corruption, Brennan and Co. have ample evidence to support their case. But the CIA is simply not credible as a “defender of the rule of law.” The Reagan-Bush Iran-contra conspiracy, the Bush-Cheney torture regime, and the Bush-Obama mass surveillance program demonstrate that the law is a malleable thing for intelligence community leaders. A more realistic take on the 2020 election is that the U.S. intelligence community is not a conspiracy but a self-interested political faction that is seeking to defend its power and policy preferences. The national security faction is not large electorally. It benefits from the official secrecy around its activities. It is assisted by generally sympathetic coverage from major news organizations.

The problem for Brennan and Co. is that “national security” has lost its power to mobilize public opinion. On both the right and the left, the pronouncements of the intelligence community no longer command popular assent.

Trump’s acquittal by the Senate in his impeachment trial was one sign. The national security arguments driving the House-passed articles of impeachment were the weakest link in a case that persuaded only one Republican senator to vote for Trump’s removal. Sanders’ success is another sign.

In the era of endless war, Democratic voters have become skeptical of national security claims—from Iraq’s non-existent weapons of mass destruction, to the notion that torture “works,” to “progress” in Afghanistan, to the supreme importance of Ukraine—because they have so often turned out to be more self-serving than true.