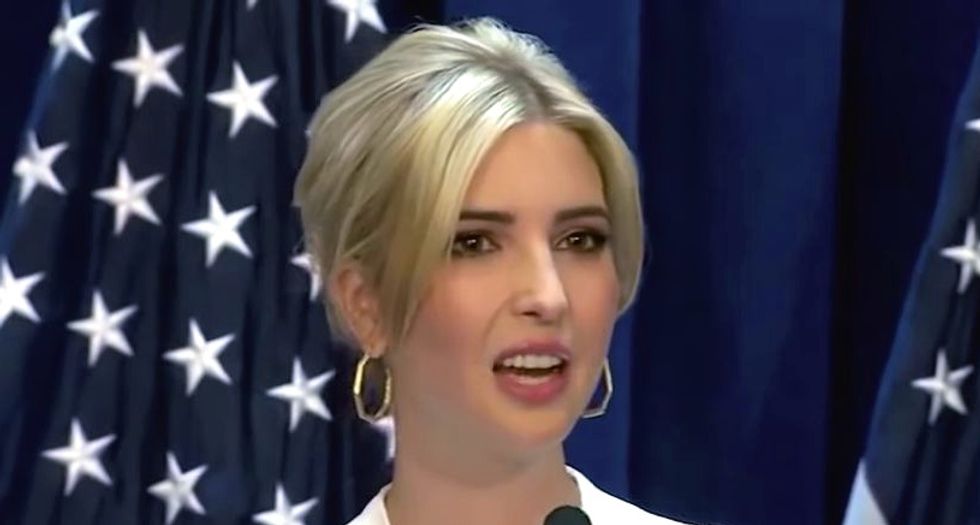 First daughter Ivanka Trump over the weekend traveled to the United Arab Emirates to deliver a talk at the Global Women's Forum in which she lauded Saudi Arabia for making "reforms" that she said were helping to "empower" women.

Ivanka's praise of Saudi Arabia may seem strange given the fact that it has been jailing women's rights activists on trumped-up charges and still requires women to get permission from male relatives to travel abroad or obtain passports.

Writing in the Daily Beast, editor Molly Jong-Fast eviscerates both Ivanka and conservative media outlets who breathlessly reported on the first daughter's fashion choices while she was lavishing kind words upon governments run by theocrats.

"Toward the end we are treated to a few shots of a hijab-less Ivanka, and in these we can see her new hair color, which Fox News is very excited about," she writes. "It’s a new chunky highlight which mirrors her father’s unblended tanner. Arab News describes Ivanka’s perennially dewy skin as 'lit-from-within,' which is a funny way to say botox."

Summing up Ivanka's appearance at the event, Jong-Fast concluded, "I'm always impressed that someone who has a near-fatless body can spend so much money to look so mediocre."

On a more serious note, Jong-Fast argues that this shout-out to the deeply repressive Saudis looks like yet another Trump family quid pro quo.

"Ivanka had a debt to settle, to the tune of a hundred million dollars that was donated to her 'women’s empowerment fund' by the UAE and Saudi Arabia," she writes. "Turns out daddy isn’t the only one in the family who can quid pro quo."

In this case, the Saudis are getting a major public relations boost from a high-profile figure close to president of the United States who is more than willing to overlook their country's treatment of women.

"It’s a pretty good deal for them, having the leader of the 'free world’s' daughter extol their 'significant reforms,'" writes Jong-Fast. "America under Trump rule may not be the shining city on the hill it once was but the optics of its most powerful woman praising these two Middle Eastern countries are meaningful."