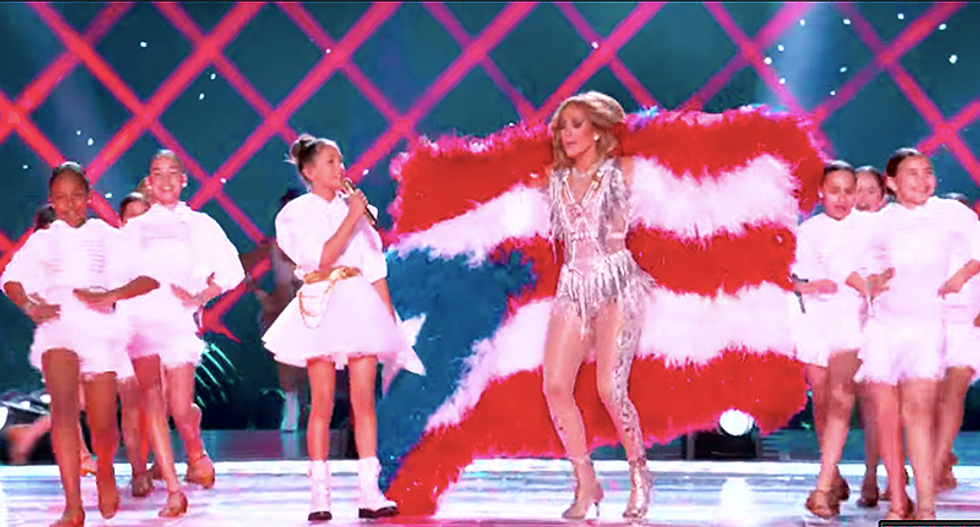 Super Bowl halftime shows are the stuff of legends. Rarely, however, do they make the political statements the way Jennifer Lopez and Shakira did.

Not since Beyonce's 2013 halftime show has an artist dared to go there. With her Puerto Rican roots, Jennifer Lopez brought much-needed attention back to the tiny American island that has endured ridiculous suffering since the 2017 hurricanes.

In a Daily Beast review, entertainment reporter Kevin Fallon explained that the Super Bowl can ultimately highlight the hypocrisy of a country that only holds up people of color when they're bashing their brains out for the entertainment of white corporate overlords in sports stadiums.

"We should all be a little sheepish about being complicit in Super Bowl fanfare," wrote Fallon. "What is this, other than a systemically-racist institution staging a militaristic pageant drowned in commodity and capitalism, in which Americans root for grown men to bash their bodies together while we all willfully ignore the scientifically proven brain trauma we are enabling—all interrupted by a performatively inclusive halftime spectacle and chased down with Jenny McCarthy scream-wondering if a person singing a Pink song in a fever-dream elephant costume is possibly Oprah Winfrey."

"It’s all bookended by perfunctory, borderline morose displays of patriotism and patriarchy-sanctioned emotion—men allowed to cry, because, well, it’s for sports and country," he continued. The ex-post-facto analysis of the whole thing centers on the number of chicken wings and pizza slices consumed. It’s a portrait of America in a nutshell, and not exactly a flattering one."

What J.Lo and Shakira did is whisper "a meager resistance" to the nonsense, he explained.

"It is rare that live television leaves you this exhilarated, practically breathless with excitement over what you’ve just witnessed, something so damn entertaining you put down your nachos and maybe even stop tweeting,"

Read his full review at the Daily Beast.