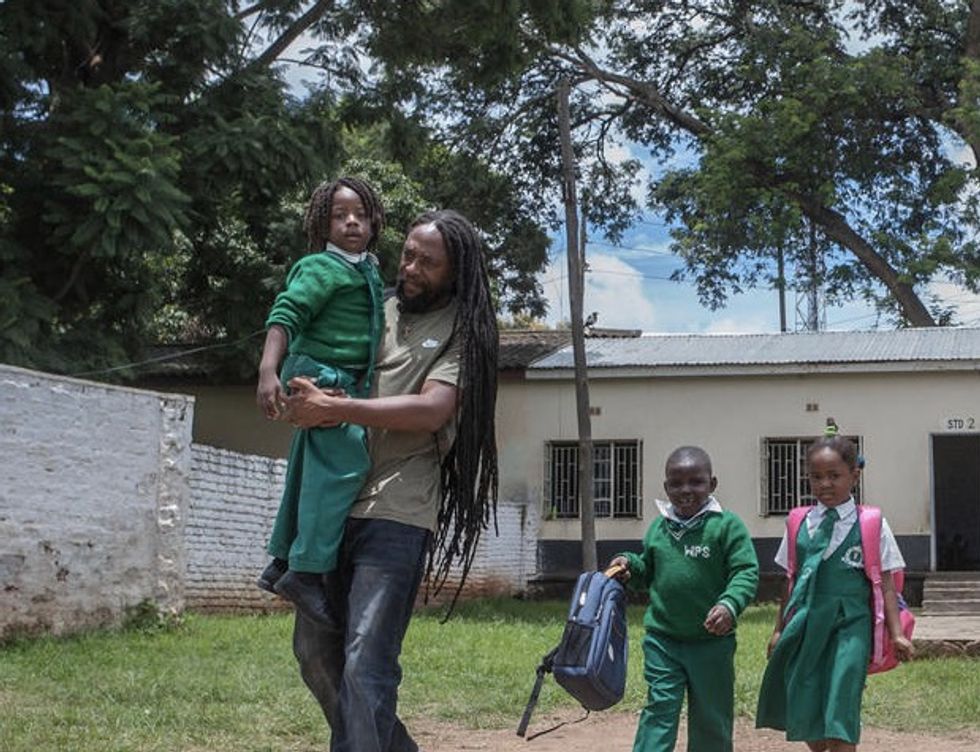 Makeda Mbewe was just six years old when she was kicked out of her primary school in Malawi for wearing her hair in the dreadlocks of her Rastafarian religion.

Two years later, she is back in the playground, thanks to a landmark court ruling in January forcing state schools to accept children wearing their hair the Rastafarian way.

The case was galvanised by her family, who joined forces with dozens of other Rastafarian parents to try to force the education system to end discrimination against children from one of the country's smallest religious minorities.

"I am delighted with the ruling because it takes a huge burden off my shoulders," Makeda's dreadlocked father, Wisdom Mbewe, told AFP.

At first there was no problem when Makeda enrolled at Blantyre Girls Primary School, in the country's capital.

But after two years -- and as her hair grew long and prominent -- the child was told to leave.

"They demanded that we cut her hair," said her father, a 40-year-old truck driver.

Rastafarianism is a religious movement of Jamaican origin which considers former Ethiopian emperor Haile Selassie to be its Messiah.

Many Rastafarians sport dreadlocks which for them symbolise the Lion of Judah, one of the late emperor's titles.

Dreadlocks gained global recognition thanks to the cultural influence of the late reggae star Bob Marley, also a Rastafarian, and have since become popular the world over.

Malawi's 15,000 Rastafarians have long suffered discrimination because of their hairstyle.

In government-run schools, children were told either to shave or cut off the locks, refused enrolment or simply thrown out of class.

Whether the practice had a legal foundation was the central point of the courtroom battle.

The ministry of education said the ban was justified under a policy that required all pupils to have a smart appearance and keep clean hair.

But, challenged by lawyers for the Rastafarian children, it was unable to produce documents to prove that the policy existed.

As a result of her exclusion, Makeda was home-schooled for two years -- a change that placed a strain on her family's finances.

Subsequently, the centre received complaints from the parents of 76 other Rastafarian children about being "denied admission into government schools," CHREAA lawyer Chikondi Chijozi said.

It then took the issue to court.

On January 14, High Court judge Zione Ntaba ordered the country's 7,000-odd government-run schools to admit "all children of Rastafari religion, who have dreadlocks."

Ray Harawa, a Rastafari leader in the forefront of the fight for the rights of his co-religionists in Malawi, welcomed the ruling.

"This judgment will go a long way in showcasing how seriously advanced our democracy is," he said.

The order is in line with judgments by courts in Kenya, Zimbabwe and South Africa.

They all ruled that excluding dreadlocked children from school was an infringement of their right to freedom of religion, according to the Southern Africa Litigation Centre (SALC).

The practice was a clear violation of Malawi's constitution, which guarantees the rights to freedom of religion and to equal treatment, said Edge Kanyongolo, a law professor at the University of Malawi.

"In the case of Rastafarian children, I cannot see how allowing them to keep hair in dreadlocks harms anyone at all," said Kanyongolo.

Makeda was back in school days after the court ruling.

In the playground the other children touched her hair with curiosity, but she appeared used to the attention and took it in her stride.

For Rastafarian parents, the court victory is bittersweet.

Ezaius Mkandawire said the judgment was "just the beginning" of the battle for compensation.

"There has been lots of damage," Mkandawire told AFP. "What about those people that have not gone to school for the past 25 years?

"Someone has to pay for that."