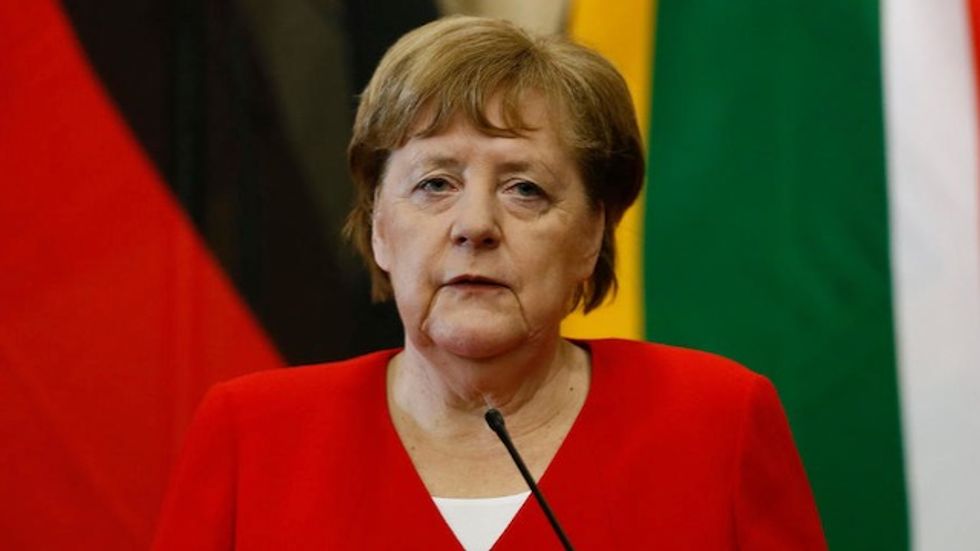 German Chancellor Angela Merkel warned Thursday against ceding ground to the far right, a day after the "unforgivable" election of a state premier with help from the AfD party shattered a taboo and invited parallels with the 1930s.

Merkel reiterated that her centre-right CDU would never work with the anti-Islam, anti-immigrant AfD and joined calls for new elections in the small state of Thuringia.

What happened in Thuringia "is unforgivable and that's why the result must be reversed", Merkel said at a press conference in South Africa.

Thomas Kemmerich from the liberal Free Democrats (FDP) stunned Germany on Wednesday when he became the surprise winner of a run-off vote for the Thuringia premiership, after AfD lawmakers ditched their own candidate to back him.

It was the first time in German post-war history that a state premier was helped into office by accepting votes from the far right, crossing a red line in a country haunted by its Nazi past.

Thousands took to the streets in protest in cities across Germany late Wednesday, including in Berlin, Frankfurt and Thuringia's capital Erfurt.

Some carried signs that read "Never again" and "Voters betrayed", while others recalled that it was in Thuringia in 1930 that a Nazi minister was first allowed into government.

The aftershocks of the crisis were being felt in Berlin too, since Thuringian state lawmakers from Merkel's own CDU lined up with the FDP and far right in voting for Kemmerich over popular incumbent Bodo Ramelow from the far-left Die Linke.

Merkel's centre-left Social Democratic (SPD) coalition partners reacted furiously to the debacle, calling for her conservative party to clearly distance itself from the AfD if the national government is to survive.

"There can be no carrying on as usual without resolving this problem," fumed SPD co-leader Norbert Walter-Borjans.

The SPD and CDU are due to hold crisis talks in Berlin on Saturday.

Speaking in Pretoria, Merkel said the CDU's Thuringia branch would not be allowed to help Kemmerich cobble together a minority government.

She called Wednesday's vote "a bad day for democracy" and said the role played by her local allies "broke with the values and convictions of the CDU".

"We must now do everything we can to make clear that this can in no way be reconciled with what the CDU does and thinks, and that's what we will work on in the coming days," she added.

In states across Germany's former communist east, the AfD is a major political force and mainstream parties are increasingly scrambling to keep it locked out of the corridors of power.

In Thuringia, the AfD is led by Bjoern Hoecke, one of the party's most radical figures who has called for a "180 degree turn" in Germany's atonement for Nazi crimes.

A picture of Hoecke shaking hands with Kemmerich after the election win was splashed across the front pages of several German newspapers.

"The handshake of shame", screamed best-selling daily Bild, slamming Kemmerich for "letting himself be elected by a neo-Nazi".

On social media, the picture was quickly twinned with one of Adolf Hitler shaking hands with German president Paul von Hindenburg in 1933, the year Hitler became chancellor.

He tweeted a 1930 quote from Hitler celebrating the NSDAP's kingmaker role in the state: "Our biggest success is in Thuringia," the Nazi leader said at the time.

Since its creation in 2003, the AfD has gone from strength to strength in Germany, capitalising on anger over Merkel's 2015 decision to allow in over a million asylum seekers.

At the last general election, the party scored almost 13 percent nationwide and won its first seats in the German parliament.

The SPD's Walter-Borjans warned that the world was watching how Germany was dealing with the rise of the far right and the "breach in the dam" in Thuringia.

"What has happened here is a signal that we can't allow to go unanswered," he said.