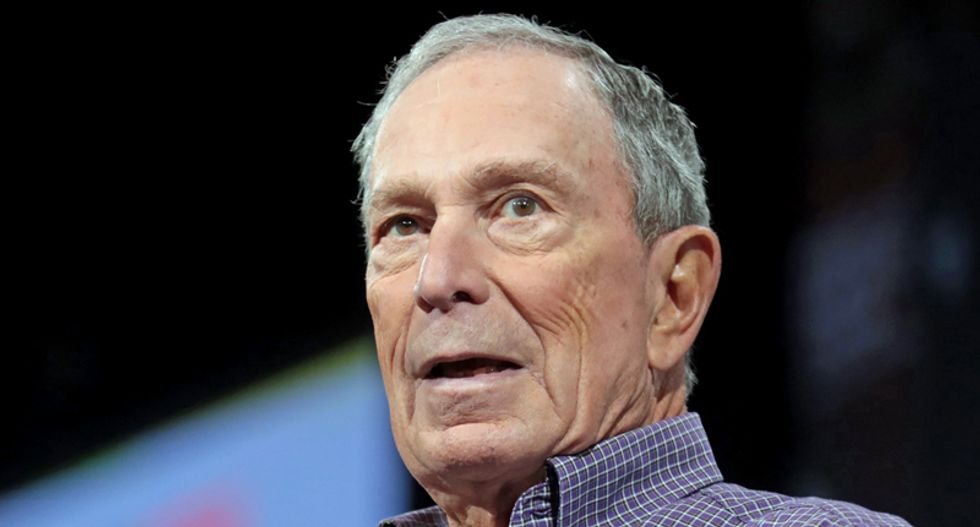 Former New York City Mayor Michael Bloomberg was ridiculed online on Monday after yet another tape of his comments resurfaced.

"Former New York City Mayor Mike Bloomberg said at a private event in 2016 that his presidential campaign platform would have been to "defend the banks" and also labeled the progressive movement and Massachusetts Sen. Elizabeth Warren, now a rival for the 2020 Democratic presidential nomination, as 'scary,'" CNN reported Monday.

"Audio of his comments, allegedly from a closed Goldman Sachs event for at Yankee Stadium on June 15, 2016, were anonymously sent to CNN by an email address called 'CancelGoldman,' with the author claiming he worked at Goldman Sachs for 14 years. The email called on Bloomberg to drop out of the race," CNN explained. "Bloomberg's campaign confirmed the authenticity of the comments."

Audio of the event was posted on Sound Cloud:

"The left is arising. The progressive movement is just as scary," Bloomberg said. "Elizabeth Warren on one side. And whoever you want to pick on the Republicans on the right side?"

"Well, to start, my first campaign platform would be to defend the banks, and you know how well that's gonna sell in this country," Bloomberg added.

"But seriously," he continued, "somebody's gotta stand up and do what we need. A healthy banking system that's going to take risks because that's what creates the jobs for everybody. And nobody's willing to say that. The trouble is, these campaigns in this day and age, really are about slogans and not about issues anymore. And in this election you're going to see people are voting and they either love or hate, mostly hate both, but who you hate the least. That's what they're going to vote for. And they're not going to vote on issues."

Bloomberg referred to the Goldman Sachs crowd as "my peeps."

Sen. Elizabeth Warren (D-MA) cherished the idea of scaring the billionaire and his peeps.

Warren's campaign bought the url www.ScareMikeBloomberg.com -- which redirects to a page where people can contribute to her campaign.

The Massachutts senator wasn't the only one dunking on Bloomberg for his comments, here's some of what was being said:

LOL, if Mike Bloomberg called Elizabeth Warren “scary” *before* she reached into his chest and pulled out his still… https://t.co/C6qlkeVtKK
— Jamison Foser (@Jamison Foser)1582584207.0

Warren strikes fear into billionaires like Bloomberg because she knows exactly what levers to pull to make them pay… https://t.co/mFIDLpMRl0
— Sara Ackerman 🐺🗽 (@Sara Ackerman 🐺🗽)1582582621.0

As often as Mike Bloomberg attacks Elizabeth Warren, he only guarantees I'll be very glad to cast a vote for her. H… https://t.co/W9Gugbpfd7
— Chris Sampson (@Chris Sampson)1582591011.0

This is who most Democrats in power are ok with being President, but Bernie is a step to far https://t.co/LPEmaGWKZG
— Alexander The Meh (@Alexander The Meh)1582582734.0

Bloomberg saying he is scared of Elizabeth Warren is a better campaign ad than anything he's spent his $500 million… https://t.co/YuyjDfRbc0
— Adam Best (@Adam Best)1582581714.0