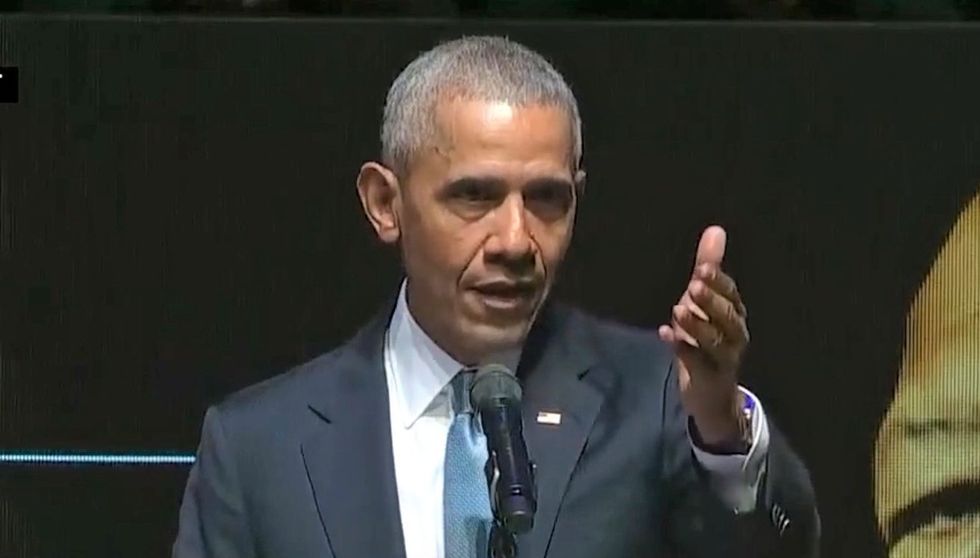 For someone who has gone out of his way to stay off the political radar, Barack Obama could hardly loom larger over the bitter battle for the Democratic White House nomination.

The 44th president of the United States has been quoted dozens of times in primary debates and starred (unwittingly) in campaign ads in the run-up to the South Carolina primary and Super on Tuesday.

But Obama has so far strictly adhered to his pledge to remain out of the fray in terms of endorsing a particular candidate - though he has launched a few warnings from the sidelines during the primary process.

"The average American doesn't think we have to completely tear down the system and remake it," Obama told a fund-raising meeting in November.

Though he did not single out a particular candidate, he said most voters did not have the same views as "the activist wing of our party" - a veiled warning about the shift to the left promised by Bernie Sanders.

"Obama is extremely popular within the Democratic Party, and particularly with African-Americans, a key voting bloc in many states" including South Carolina, said Kyle Kondik, an analyst at the University of Virginia's Center for Politics.

"I can understand why candidates would want to make it seem as though he is backing them."

Of course, no one is using his connection with the nation's first black president more arduously than Joe Biden, Obama's vice president who is seeking a boost to his flagging campaign to take on President Donald Trump.

Biden is "running as Obama's understudy and heir," Kondik said. The pair spoke on Tuesday ahead of the South Carolina contest, which is vital to Biden's chances, The New York Times reported.

But Sanders is riding high as the frontrunner, and the party's moderates are nervous about the 78-year-old senator's chances against the Republican incumbent.

"The establishment is freaking out," blared CNN.

"Running Bernie Sanders Against Trump Would Be an Act of Insanity," concluded a column in New York magazine.

"If there is a way to stop - or at least slow - Sanders, most Democratic insiders are convinced it's this: former president Barack Obama and former first lady Michelle Obama get behind an alternative candidate to the Vermont senator," CNN commentator Chris Cilizza wrote this week.

"Not only that, but the Obamas make their endorsements soon - like pre-Super Tuesday - and they urge all of the other candidates to get out of the race ASAP."

Back in November, Politico reported that Obama planned to make a public statement if Sanders got too far out in front, in a bid to block him from winning the nomination.

'No plans to endorse'

If Obama did speak out, his opinion would resonate, but few think that will happen.

"President Obama has several friends in this race, including, of course, his own esteemed vice president," his spokeswoman Katie Hill said this week in a statement.

"He has said he has no plans to endorse in the primary because he believes that in order for Democrats to be successful this fall, voters must choose their nominee."

In 2016, Obama threw his weight behind Hillary Clinton, his onetime secretary of state, only when it became clear that she would beat Sanders for the nomination.

But the former US leader has made his views known on elections abroad, formally endorsing Emmanuel Macron in France and Justin Trudeau in Canada during their campaigns.

The rare comment from Obama's spokeswoman came as part of a condemnation of what she called a "despicable ad" from a pro-Trump PAC in which Obama's comments were taken "out of context" to disparage Biden.

Would Obama speak for Sanders?

But he has stayed silent about the many Democrats using his speeches in their ads in a bid to imply they have his support.

Biden of course has leveraged their friendship and partnership, but billionaire Michael Bloomberg, progressive Senator Elizabeth Warren and former Indiana mayor Pete Buttigieg have also sought to associate themselves with Obama's legacy in some way.

And all of them have quoted him to back up their policy positions.

"As Barack Obama said, we should pay attention to where the voters of this country are. And spending nearly $60 trillion is not where they are," tweeted moderate presidential hopeful Amy Klobuchar, as she bashed Sanders' platform.

Former presidents generally shy away from endorsing candidates after they leave office, with the notable exception of Bill Clinton -- who backed his wife in the 2008 and 2016 primaries, Kondik explained.

"I have no idea if Obama might endorse, but there has been no indication that he will. He, like many other Democrats, may honestly be conflicted about who he might back," the analyst added.

But if Sanders goes on to win the nomination, Kondik said he would be "curious to see whether Obama will speak" at the party's nominating convention in July.