Opposition urges 'Russia without Putin' in rally for slain liberal 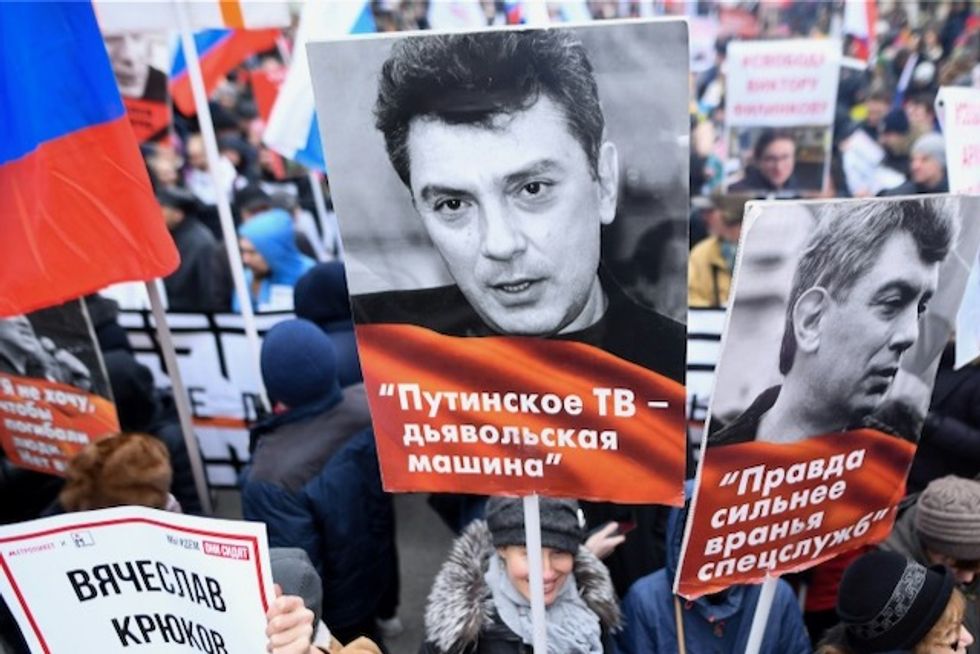 Opposition supporters attend a march in memory of murdered Kremlin critic Boris Nemtsov in downtown Moscow. It is the first such rally since Russia's Vladimir Putin announced controversial changes to the constitution in January. AFP / Kirill KUDRYAVTSEV

Thousands rallied in central Moscow on Saturday to call on President Vladimir Putin not to stay in power indefinitely, in the first major protest by the Russian opposition since the Kremlin chief announced controversial plans to change the constitution.

The rally marked five years since the assassination of opposition politician Boris Nemtsov but its organisers also want the event to send a message to Putin after he proposed major constitutional changes.

Organisers, including the country's most prominent opposition leader Alexei Navalny, called for a mass turnout to show Putin that he must not consider staying in power by any means when his current mandate ends in 2024.

The rally was given permission by the Moscow authorities -- after a succession of demonstrations urging fair elections last summer were roughly dispersed -- and steady numbers were already going through metal detectors set up by police to ensure security, an AFP correspondent said.

"The Putin regime is a threat to humankind," said the slogan on one placard next to a portrait of Nemtsov. "Putin's policies are based on total lies," said another, quoting the liberal politician who was on assassinated on February 27, 2015 in central Moscow.

"Russia without Putin!" the crowds chanted repeatedly as they began marching.

The White Counter monitor which counts attendance at protests said even in the early stages 3,700 people were taking part.

Putin, who has dominated Russia for two decades, in January unleashed a political storm, proposing an overhaul of the constitution, the first changes to the basic law since 1993.

Analysts see the plan as beginning preparations for succession when Putin's fourth presidential term ends in 2024, while the opposition says the Kremlin strongman wants to remain leader for life.

"I think that this is a crime, that it is mocking the constitution," said Semyon Pevzner, a pensioner aged 75. "The only aim is to stay in power by any means possible."

Putin first came to power as prime minister in 1999 under Boris Yeltsin before becoming president in 2000. He served the maximum two consecutive terms between 2000 and 2008 before a four-year stint as prime minister.

He returned to the Kremlin in 2012 for a newly-expanded six year mandate and was re-elected in 2018. But opponents fear he could remain Russia's number one even if the job of president nominally goes to someone else in 2024.

Kseniya Telmanova, 21, a student, reflected that Putin had been president for her whole life except her first few months. "Probably those were the best months of my life," she said, laughing. "The leaders should fear the fact they can lose power."

Russia is planning to hold a referendum on the constitutional amendments on April 22.

According to the Levada Center, an independent pollster, a quarter of Russians will back the constitutional proposals, while 56 percent said they were still not sure why the changes were needed.

Forty-four percent also said Putin should quit power in 2024, while 45 percent said he should stay.

Around 2,000 people meanwhile gathered for a similar demonstration in Russia's second city of Saint Petersburg, clutching flowers, portraits of Nemtsov and banners reading "They feared you Boris".

"This is basically the only chance we have to go out and say that we are against what is going on in the country and against this police state," said Galina Zuiko, 55.

Nemtsov -- one of Putin's most vocal critics and a former deputy prime minister in the Yeltsin government -- was shot and killed on a Moscow bridge near the Kremlin.

In 2017, a court found a former security force officer from Chechnya guilty of his murder and sentenced him to 20 years in prison. Four other men were found guilty of involvement in the killing.

But Nemtsov's family and allies insist the authorities have failed to bring the masterminds to justice.

Protesters also urged authorities to release Russia's political prisoners with a group of women holding a banner reading: "Mothers against political repression. Freedom to our children."

A number of people were jailed after tens of thousands rallied in Moscow last summer to demand fair elections, in the biggest upsurge of protests in the country for over half a decade.