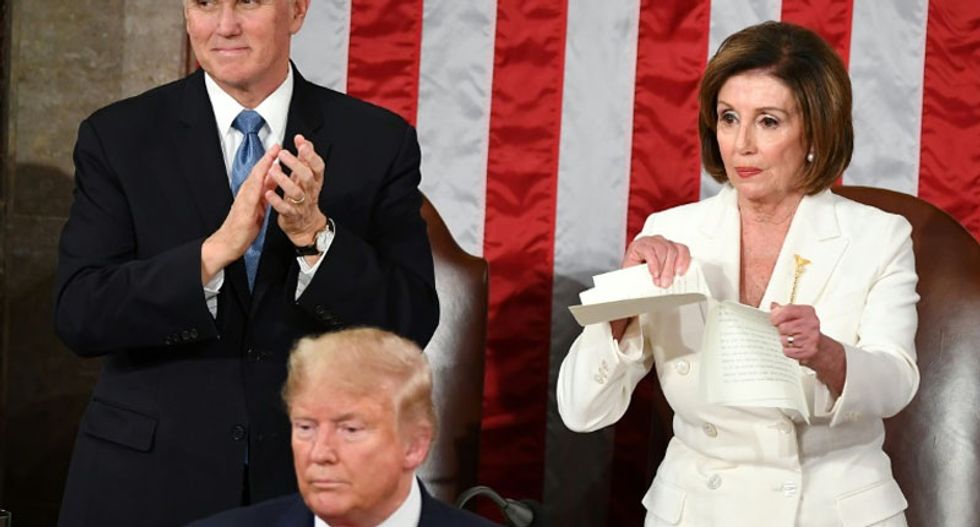 Weirdly enough, Tuesday night wasn't the first time a president delivered a State of the Union address in the middle of his impeachment trial. Back in 1999, Bill Clinton delivered one in the same circumstances. It's hard to believe the timing would work out almost exactly the same way but it did.

Clinton was skilled at giving State of the Union speeches under stressful situations. In 1994 he gave the speech without a Teleprompter for several minutes and nobody knew the difference. In 1997, it was broadcast on a split screen with the verdict in the O.J. Simpson civil case. In 1998, his speech came just two weeks after the revelations about his affair with Monica Lewinsky and was good enough that many people believe it may have saved his presidency. Still, the speech during his impeachment must have been very tough. Historian Douglas Brinkley said at the time:

This is a stage performance of Clinton at his best. We watch in wonderment this flawed, failed President who has so much talent, so much intelligence, but whose Achilles' heel has been so destructive for him.

Clinton's performances always seemed to be him walking the high wire while we all held our breath waiting for him to fall, relieved when he somehow made it to safety. He was an adept survivor but he was grievously scarred by his self-inflicted wounds. Trump too is a survivor — but he is more of a carnival act, putting on one spectacle after another, distracting and misdirecting, leaving everyone dizzy and overwhelmed

Coming as it did while the whole country awaits the preordained verdict to come in the Senate, and in the midst of a wild electoral debacle for the Democrats in Iowa, Trump's speech was even more surreal because, unlike Clinton, he is running for re-election. And although I would never have believed it was possible at the time, the level of polarization today is much worse than it was during the Clinton era. Despite the blatantly partisan, political nature of that impeachment, based as it was on charges of lying about an inappropriate personal matter, the two party leaders in the Senate had worked together to lay out a process. While the outcome was also predetermined then, there were some party crossovers in the final vote.

The anger and aggression is much more intense this time, even though there's almost no chance that any Republicans will vote to convict Trump. And while Clinton was remorseful for his behavior, publicly apologizing to the nation for putting it through the whole ordeal, Trump is clearly furious and reportedly plotting his revenge,

Democrats are in no mood to compromise either. It is a pitched battle at this point, and that was obvious when all the members of Congress were forced to be in the same room together, with the president they either love or hate standing before them to give his big speech.

Trump was clearly on edge. When Speaker of the House Nancy Pelosi held out her hand to shake his before he took the podium, he refused to take it, signaling that there would be no more nods to decorum than absolutely necessary. In what was a first as far as anyone can remember, the Republicans chanted "Four more years" from the floor as he began to speak. Their enthusiasm only got more hysterical as the evening wore on.

Trump delivered the speech in his usual wooden style when he's reading someone else's words on the Teleprompter. He bragged for at least a half an hour about his alleged accomplishments, ungraciously stating as usual that he had succeeded where all his predecessors had failed. And there were some reality-show moments. He announced that he was giving a little girl in the audience a voucher for the school of her choice and acknowledged a 100-year-old Tuskegee airman along with his 13-year-old great-grandson, who aspires to join the Space Force. He really went for the bathos and pathos by surprising a military wife with her husband who had been deployed overseas. Everyone, Republicans and Democrats alike, applauded as expected for these calculated moments of Oprah-like sentimentality.

Many of the "real folks" he acknowledged in the audience were people of color and part of his speech seemed geared to giving the false impression that he is particularly devoted to raising up minorities with appeals to school choice and criminal justice reform. This was likely one of his consultants' ideas, perhaps with the aim of peeling off a few African American men from the Democrats, but mostly in an attempt to lure back some of the formerly devoted white women in the suburbs who find him to be reprehensible.

That might have been successful except for the fact that while he eschewed the usual puerile insults and crude mockery, he then went on to deliver his customary hard-right, red-meat rally speech, in slightly more flowery language.

He hit all the high points, from religious freedom (except for Muslims, of course) his silly border wall, abortion, judges, school choice and one that I think we're going to hear a lot more about: socialism.

Freedom unites the soul? What?

But the real gift to the MAGA base was a brilliant reality-TV moment, one designed to fill their hearts with joy and make every liberal in America's head explode. There is no one Trump could have brought into the Capitol who could possibly have been more offensive to Democrats everywhere than Rush Limbaugh. He is among the top five people in the country responsible for the utter degradation of American politics over the past 30 years. Trump would not be president were it not for the odious path Limbaugh laid out. So naturally, when he found out that Limbaugh had been diagnosed with cancer, he invited him to a joint session of Congress as his special guest.

Trump extolled Limbaugh's virtues as Republicans ecstatically cheered, then announced that he was presenting him with the Presidential Medal of Freedom, and instructed First Lady Melania to put it around his neck right then and there. The moment was oddly redolent of Trump's old beauty-pageant days with Limbaugh playing the role of the surprised winner:

He wasn't actually surprised. It had been announced earlier. But that's reality TV for you.

It appears that Nancy Pelosi knows how to do reality show politics as well.

She was asked on her way out why she did it and she replied, "Because it was a manifesto of mistruths."

Trump must be steaming. She stole the show.